Everything I Long For, Hayden Desser's 1995 full-length debut album, opens with the sound of the singer clearing his throat.

Twenty years and seven albums later, that seemingly unrehearsed little moment still sums the singer-songwriter up nicely: quietly tentative, seemingly ambivalent about being heard – until he is. That's when he delivers a story in song, be it about love (usually love), getting lost, being lost, people and places.

A lot has changed since that first quiet cough. The Thornhill, Ont.-born-and-bred man who once sang "at my parents' house I'll stay for free until I'm at least 43," is, in fact, now 44 with a family and, yes, a home of his own.

Though a few streaks of salt have sneaked into his peppery head of curls, and his taste for grandpa cardigans remains the same, the 2015 version of Hayden (born Paul Hayden Desser, he uses only his middle name professionally) still calls to mind your coolest art prof or your yoga teacher's bemused architect husband. His latest album, Hey Love, comes out March 24 and, yes, he still has that way with words – some people just do.

If a conversation with Pharrell Williams is like a trip to space, a chat with Hayden is akin to a night at your favourite pub: rumbly, soft and a bit blurry around the edges. He thinks carefully, laughs easily and answers exactly the question he is asked, rather than the one he really wants to answer. In short, he's really real.

Take his answer to a simple question such as, "How is the tour going?" (He's been on the road with Dan Mangan + Blacksmith, and is talking to me on the phone from Calgary.) "After we set off," he says, "somehow winter turned to spring." He proceeds to tell a story about waking up one morning at Alberta's Banff Centre (which he calls a "really cool, bizarre place that was off my radar") and finally seeing sun, melting snow and the usual flowery suspects poking through the earth.

If Hayden Desser is only two things, he's observant and romantic. He's frequently described as brooding, and those uncomfortable with his particularly paced brand of folk rock tend to just not get it. Hipster haven Pitchfork in 2013, for instance, in a review of that year's Us Alone, described his music as "understated to a fault: slow and mopey and not always reliable."

Some of the above is true, but some of it is patently false. While languid and deeply accessible, Hayden's output is far from unrehearsed. His voice goes up by a few decibels while talking about the production of Hey Love. "When I work on a record, and this record in particular," he says, "I'll say that I've probably heard each song 500 times in different incarnations."

So was it hard letting it go? Is he happy with the end result? "Well, I was feeling good about it when I handed it in," he says with a laugh, eventually trailing off.

(The album, for the record, is rhythmic, warm and, yes, reliably Hayden.)

Hey Love's first single, the sun-dappled Nowhere We Cannot Go, is pressed on vinyl that comes wrapped in a map-printed sleeve. ("Let's spill our drinks onto this map," Hayden croons on the track, "and where the ice melts we will unpack.") With that geographical fixation in mind, I end our conversation by asking him his three favourite places in the world. "I spent one beautiful afternoon a few years ago in Barcelona," he says with a chuckle, "and then spent the next year proclaiming to anyone who would listen that it's my favourite city in the world." Is it still?, I ask. "I don't even know!" he says with another laugh.

Locally, he prefers "the room that my piano is in" at his family's cottage north of Toronto, where, he reveals, "I've written 90 per cent of my songs."

But – he's Hayden, the gravelly voiced romantic, after all – and his heart, at the end of the day, is at home. "I love my daughter's room," he concludes. "That's where I play guitar and read her stories." Different stories from the ones he tells us, I'm sure, but stories just the same.

Hayden is on tour. Get dates at

What happens when Gord Downie, The Sadies, Sarah Harmer and Hayden come together for a cause
May 11, 2018 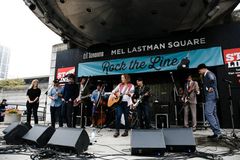 Three songs you need to hear: Sean Michaels’s playlist of the week
May 12, 2018 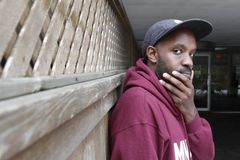