The suicide of Kurt Cobain 20 years ago must rank as one of the least surprising deaths in rock history. There were intimations of illness, addiction, despair and suicide in the music and imagery of his band, Nirvana, and Cobain's behaviour in the months leading up to his death – the 27-year-old guitarist, songwriter, addict and ill-suited spokesperson for a generation was found at his Seattle home with a self-inflicted shotgun wound to his head – indicated a man for whom life had become an unwinnable struggle.

Just days before the 27 year old guitarist, songwriter, addict and ill-suited spokesperson for a generation killed himself, he'd walked away from a Los Angeles rehab centre and holed up with his drugs in the greenhouse above the garage adjacent to his mansion. His body was discovered by an employee of an electrical firm dispatched to install a new security lighting system in Cobain's home, the latest and final attempt by the famously unhappy rock star to build a barrier between himself and the world outside.

Cobain's violent end was followed by inevitable speculation about why he did what he did, with addiction, mental illness and even covert conspiracy vying for primary cause. Although the popular narrative of rock music instantly conferred upon the dead star the mantle of myth and martyr, it tended to tiptoe around a more likely reason suggested in Cobain's suicide note, pinned to a planter close his body, addressed to "Boddah."

"I haven't felt the excitement of listening to as well as creating music along with reading and writing for too many years now," Cobain wrote. "I feel guilty beyond words about these things… The fact is, I can't fool you, any one of you. It simply isn't fair to you or me. The worst crime I can think of would be to rip people off by faking it and pretending as if I'm having 100-per-cent fun."

Certainly drugs, depression and growing up in a shattered family contributed to his state of mind, if not his decision to pull the trigger. But what was Cobain himself really thinking when he chose to end his life? What took precedence in the suicide note even before his expression of love and apology to his wife, Courtney Love, and their infant daughter, Frances Bean?

It was the music. The music had lost its magic. And without that, in Cobain's clouded mind, life had lost its purpose. Rock had failed him, and it was time to die.

If this sounds a little melodramatic, remember that Cobain came from a regional musical scene known as grunge that venerated punk rock as the ultimate expression of musical purity, freedom and resistance to corporate co-optation. By the time of his death, grunge had become a lucrative marketing segment in a struggling industry, and bands were being processed and re-packaged – frequently as "alternative" music – as a kind of grunge-lite. As it had post-Elvis, post-Beatles and post-Punk, the music business was taking real dissent, giving it the charismatic veneer of rebellion against consumerism and conformity, and selling it back to unwitting music fans.

Cobain worshipped punk because it spit on the machinery and promised equal-opportunity inclusion for all, a place where even losers were welcome. But it was a myth, always has been, and the contradiction between it and reality was, by 1994, vividly embodied in the multi-millionaire rock star in sneakers and ripped jeans who stood on the cover of Rolling Stone wearing a T-shirt that said "Corporate Magazines Still Suck." In fact, you can still buy a copy of that T-shirt online for $40 from the estate of Kurt Cobain.

Rock music's defining mythology has always strained to contain that contradiction between rejection and exploitation. As the musical force that galvanized a postwar generation of affluent, disaffected teenagers, it at once appealed to the desire for independence and rendered it into a formidable commercial enterprise. Elvis Presley stormed the pop-cultural consciousness as a force of seemingly uncontainable exuberance, youth and sexuality – only to be neatly trimmed and enlisted in the army.

By the time punk emerged 20 years later, rock was waging an intergenerational war on itself. Punk's first wave decried the bloated, early '70s commercial-music world and claimed that rock had lost its original calling. Now it was time to get back to the down-and-dirty roots, to give rock 'n' roll back to the kids from whom it had been hijacked and betrayed.

Punk, too, became a label, a marketing category and a fashion statement, but never so that it's core value was lost, or its romantic appeal. If anything, punk triumphed because of the persistence of rock's fundamental idealism, that the music mattered more than the industry that sought to corrupt it. And this was the spirit – teen spirit – that the aptly named Nirvana embodied.

Nevermind, perhaps the last rock album to deliver the promise of this naive conviction, had cover art that showed an underwater baby being lured toward a fish hook baited with a dollar bill. In that image, rock's inherent contradiction and inevitable failing were boldly articulated, and, in a way, Cobain's unhappy future was metaphorically foretold.

Of all the fatuous claims about his legacy in the days following the death of Kurt Cobain, none were truer than the ones that called him the last rock star. Truly, it was over.

Notes from Seattle: 20 years later, what is Kurt Cobain’s legacy?
April 4, 2014
Twenty years later: What In Utero (and its anniversary reissue) says about Nirvana
October 6, 2013 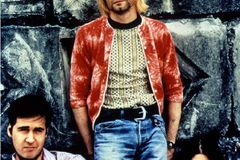 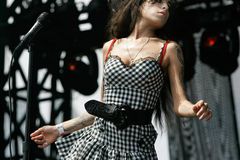 One of the greatest photos of Kurt Cobain was taken in Vancouver
April 4, 2014
Follow us on Twitter @globearts Opens in a new window
Report an error Editorial code of conduct
Due to technical reasons, we have temporarily removed commenting from our articles. We hope to have this fixed soon. Thank you for your patience. If you are looking to give feedback on our new site, please send it along to feedback@globeandmail.com. If you want to write a letter to the editor, please forward to letters@globeandmail.com.
Comments