The world may be her oyster, but her modesty was preserved by a clamshell bikini. Lady Gaga, born in the traditional way as the brunette bundle Stefani Joanne Angelina Germanotta, brought her ArtRave: The Artpop Ball tour to Toronto's Air Canada Centre – the seventh of eight Canadian dates, with one more stop (Vancouver, Aug. 9) to come.

The show is a confetti-strewn affair, themed to the 1989 Disney film The Little Mermaid and awash with excitable dancers, dance-pop eruptions, wig flips and costume switcheroos. Gaga would have been three years old when The Little Mermaid first took her under the sea. This was a make-believe exposition and a fantasy come true, from the artist who rode a unicorn on her last trip here.

That previous jaunt was the Born This Way Ball, an unexplainable concert experience with medieval allusions that failed to finish its scheduled run because of a hip injury to a pop cyborg previously thought indestructible. The new show, named after Gaga's third studio album Artpop, flows sleeker and with less pretension.

The superstar's "dancing" was mostly sequined-leotard calisthenics, and her singing was often embellished with backing vocal tracks. Gaga read fan letters more than once, and even recited a heartfelt missive from "Britney," the young woman who was brought to the spotlight to sit aside her heroine on the piano bench at the end of a Lucite catwalk for a lovely, stripped-down balladic version of Born This Way. As we learned from her fan mail, Britney is a self-diagnosed sufferer of an anxiety disorder, and yet she remained remarkably composed in front of 15,000 screaming people. Such is the power of the guru Gaga, the empowering artist known to fans as Mother Monster.

According to news reports, Gaga spent some of her downtime in Toronto visiting a fire station. And make no mistake, this effervescent handful of chutzpah, fake hair and moxy is nothing if not five-alarm. She emerged to the techno inferno of the title track dressed in a fantastic gold-encrusted get-up, with wings extending from her back and a giant blue pearl at her bosom. It was the stuff of H.R. Pufnstuf and Cher's garage sale all in one.

Before Donatella, Gaga applauded Canada's liberty. "So much freedom," she said, "so much individuality." She then commanded her subjects to action: "Now jump!" Many did.

The most ardent of Gaga's followers were standing on the floor, gawking and fawning around a sprawling catwalk set upon a luminous network of prop stalagmite. On stage, a white sea-cave was the main attraction. But of course, the "I live for the applause" singer was the main attraction, wasn't she? Particularly in her riot of dayglo apparel or her black-latex octopus outfit, we could not escape her – if the tentacles didn't get us, her outrageous entitlement of attention would.

The hits Poker Face and Applause were unstoppable and enthralling, but often Gaga's voice was lost within the beats and synthesized hubbub. She's not like Jennifer Lopez or Britney Spears or even Madonna, who were raised as dancers and limelighters, not musicians. And yet, she prefers to perform spectacles that, by design, fail to showcase all of her abilities.

But perhaps that is about to change. Her next album is to be Cheek to Cheek, a vocal-jazz project with Tony Bennett. Mermaids sing only to each other, not to you and me. And although the tracklist for the duets album has yet to be revealed, we can hope that the singer who wishes to live underwater is able to move Beyond the Sea.

PETA unimpressed with Lady Gaga’s accessorizing of dog, Asia
May 12, 2018 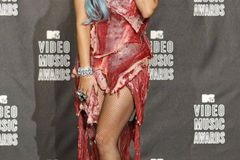 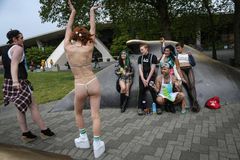 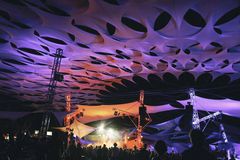