Growing up in the Northwest Territories, Willie Thrasher found joy – and later solace – in music. Later, it would become his life – and connect him once again to his native roots after he was ripped away from his family and his culture at residential school.

In 1981, Thrasher put out an album, Spirit Child, steeped in his Inuvialuit culture, with tracks such as Old Man Inuit and Shingle Point Whale Camp.

Nearly 35 years later, the album is being reissued, following the inclusion last year of three tracks on an anthology of indigenous music released by Seattle-based Light in the Attic Records, which has a solid track record of releasing high quality reissues. Native North America (Vol. 1): Aboriginal Folk, Rock, and Country 1966-1985 received global attention, critical acclaim and sent Thrasher – whom you might find busking these days in Nanaimo, B.C. – back into the spotlight.

"It brought back a lot of memories. I had long hair. We were young and wild under the great Northern Lights, you know?" Thrasher says. "And it brought back a lot of memories of how we travelled: We did powwows at universities and colleges, from one town to another with a guitar on our back, getting ready for our next big festival. It was one hell of an experience in our lifetime."

Thrasher was born in 1948 in Aklavik, NWT. As a small child, he spent summers on his father's whaling boat – travelling to camp near Shingle Point. His earliest musical memories were created out there on the water, listening to CHAK radio out of Inuvik.

"I used to hear country, fiddle music … and we'd hear Porter Wagoner, we'd hear good ol' rock and roll music. And then I made my first guitar out of paper."

Thrasher, one of 21 children, had a happy home life with loving parents. But in 1953, when he was 5, he was sent to residential school.

"Before I went to residential school, I was close to my mom and dad; we were close to the

wilderness, we would always take that boat out in the Mackenzie River and we would go fish camp, we'd go whaling – my mom always talked Inuktitut to me," he recalls from his home in Nanaimo. "And then the day that the residential school started, that was the biggest turning point in my life. …

"[The teachers] were taught to brainwash us away from our culture, our life, our singing, drumming, dancing. And any time that we would try to think our traditional ways, our people like me would get punished. Get strapped or put soap in our mouth," he continues.

"We didn't know what was happening; it was like a confused life. And we did not know that we were losing our heritage while we were living there. They were slowly changing our way of thinking, our way of life, you know? Telling us that we were pagans, we were demons; that we would never make it to heaven unless we were Catholics. And they slowly changed us that way, to think that way. Of course you change if you're five years old; then you start growing up with it."

His life would change again a few years later, when he discovered a set of drums in the gym at the residential school in Inuvik. There was nobody to teach him, so he imitated what he heard on radio and saw on television.

"I started sitting there banging on it, banging on it," he says. "I used to bang the hell out of it every day. And then I started getting better and better."

Thrasher, who would also teach himself to play guitar, paid particular attention to Ringo Starr, his favourite Beatle – in the movie A Hard Day's Night.

"I started watching how he played drums and I started picking up more, and I started letting my hair grow. It was taking me away from all the loneliness."

Thrasher began jamming with friends at residential school. They formed a band, the Cordells. One night, playing in Inuvik – their typical fare: the Beatles, the Rolling Stones, CCR – they were approached by an older white man between sets, who came to their table with a suggestion.

"He told us: 'Why don't you write your own culture, your own music, about your traditional ways about how you used to live a long time ago, your language?' " Thrasher recalls. "He knew about our ways more than I did. And that was another turning point in my life. I'll never forget what the old man had said."

Thrasher never saw him again – he doesn't even know the man's name – but that anonymous fan changed his life. He began reading about his culture, asking his mother questions and writing songs that reflected his own experience. His first, Eskimo Named Johnny, was about an Inuk living in the city but pining for home: the midnight sun, the Arctic Ocean. "He didn't like the street lights, he didn't like the cars. He didn't like the highways," Thrasher sang.

He recorded Spirit Child at CBC Montreal in the late 1970s. Producers later added the Inuit voice that gives the opening track Silent Inuit its haunting quality, as if someone popped up in the room to whisper translations into your ear. The song became a northern hit after the album was released in 1981, but without a proper promotion or touring budget to support the endeavour, it slowly faded away.

Thrasher continued to make music while facing the all-too-familiar demons that are the legacy of the shameful residential school program: estrangement from family members, drugs, alcohol. He ultimately ended up in B.C. after visiting his mother in Vancouver. "I found out there was no snow in winter and I thought: 'I'm staying here.'" He settled in Nanaimo and continued to live a quiet, contented life with his partner.

Then three of his tunes were included in Native North America, released last November. It was a success, sending Thrasher out on the road and leading to the reissue of Spirit Child – out Oct. 30, also on Light in the Attic Records. It's the same label that reissued Sixto Rodriguez – the musician made famous (again) in the film Searching for Sugar Man.

When a friend in Nanaimo showed Thrasher the Oscar-winning documentary a few months ago, the Inuit musician could relate. The Mexican-American musician bombed in the United States in the early 1970s but became a star in South Africa before fading into obscurity. "I watched it and I thought that guy went through what I went through," Thrasher says. "And then I started realizing how much I was going through in my life."

It's an amazing thing to once again experience the anticipation of a record release and the thrill of going out on the road – although Thrasher has never strayed from the music.

"I still write music, I still travel, I still go through difficult times," he says. "It's my daily life now as a musician: getting up, having coffee, strumming a guitar, writing a song, walking by the ocean and hoping something new comes up."

Aboriginal artists sound off at hip-hop exhibit in Paris
July 20, 2015 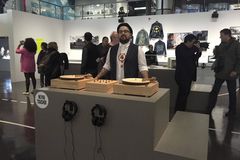 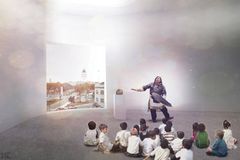