On having her work installed in the AGO's European galleries:

That was a happy accident. Originally, I was scheduled to go into the contemporary galleries, but at a very late point in the game someone realized that they were doing renovations with jackhammers in the basement, and I work in porcelain. You can't have any vibrations with ceramics. So I got a call from [AGO director]Matthew Teitelbaum, saying, "Would you consider moving to the European galleries?" I was shocked, because it was so late, but I came in and checked out the space, and it slowly dawned on me how awesome this was, for practical reasons but also for symbolic, thematic and experiential reasons. When you see the Old Master paintings I've chosen to hang with my work, you get the connection right away. You see the craft and the handskill, and there's continuity there between their work and mine, and in the seriousness and integrity of the work. We care about these subjects, they're ancient, they will affect people always, and always have. And seriously figurative work, making work that's about elemental human experience seen through a personal lens, isn't high on the radar these days in the contemporary art world.

On having a major touring exhibition in three high-profile galleries:

This is the biggest, most institutional, most "sanctioned" exhibition I've ever done. It's great, and I feel like I want to run with it, and I feel like I want to do it on behalf of artists that happen to live in this geographical area. I want to set a precedent of not being seen under the unfortunately limiting title of "Toronto artist." Canada still has this colonial mindset of favouring people from "the mainland." People with talent are either forced out in order to be recognized, or they stay and are undervalued. It would be great if we could just stop thinking about locality, and think about quality. So I'm exciting to be a Toronto artist getting this really big platform. I just hope it gives other people encouragement, or opens curatorial eyes to other people's potential.

On how we see, as compared to how we hear:

I want to talk in my work about all these things that are affecting me, about my experience, but I want to do it in a way that almost is like striking notes in music, instead of telling a direct, biographical story. I want to imply and suggest things that would evoke a feeling. But people aren't as trained to interpret visual imagery that isn't literal as they are to listen to music or maybe read poetry. These are not literal art forms, but we have a bit more cultural indoctrination, or allowance, with them. The common person is allowed to listen to a piece of music that has no words and feel, and understand that "this kind of makes me feel like this," and have a bit of confidence in that. But the visual arts have become less and less part of common culture. Advertising has taken over the visual media so much, and everything is about photography, and photography is "the real world," somehow. So when people are confronted with a series of images that are seemingly nonsensical, they don't trust themselves to let their feelings respond.

On being, occupationally, a lone wolf:

I work a lot, I live alone, I usually make my work alone. There's a lot of solitude going on in that, which is a necessary condition for me to function as an artist, but sometimes you carry the weight of not being as connected to a community as you otherwise would be. But I have this ability to process the most difficult times in my life through this work. Everybody suffers, but not everybody has this way of expressing it. I'm often very happy when I'm working. I love problem-solving - finding the right body for an idea. I think a lot about how you want to spend a life, and it means a lot to me that I can sleep well at night about that. I believe in the process, I believe in what I'm doing. I think I made the right choice. 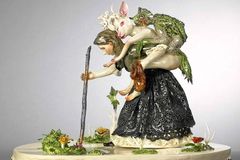