Shelly Glover was in a terrible position: 18 and pregnant, she had to leave her Winnipeg home. Raised Catholic, she couldn't bring herself to tell her parents. They eventually found out from her doctor, while she went off to a school for pregnant teens and found an apartment where she lived on her own.

Years later, she ran into some of her old schoolmates. Glover was a police officer by then, doing undercover duty posing as a sex-trade worker. Her old classmates were prostitutes. Her cover was blown. "I came from some pretty humble beginnings," she told the Globe and Mail in an interview this week.

That said, nothing could mask the excitement in her voice this week after being named to one of the country's top political jobs. "When I look back and think about where I've come from and where I've been and where I'm going, it's been just an incredible, incredible experience," she said. "Only in Canada."

Glover, 46, was sworn into the federal cabinet on Tuesday, named Minister of Canadian Heritage and Official Languages. She has parachuted into a role that includes responsibility for the arts, culture, the CBC and sports. Her dedication to sport – she played and coached soccer – is well established. She is bilingual and committed to safeguarding minority language rights.

The arts – dance in particular – figured prominently in her upbringing, she says. But when asked during a brief interview about her recent cultural calendar, Glover didn't have much to offer.

She inherits the portfolio at a critical juncture, and has big shoes to fill. Budget cuts implemented last year, to be phased in over three years, include a 10 per cent cut to the CBC and a substantial reduction to the department itself. So the arts community – which received a reprieve last year when Canada Council for the Arts funding was maintained (it was cut slightly this year) – is watching nervously to see if Glover has the right stuff for the job. Her predecessor, James Moore, now the Industry Minister, set a high bar: he had considerable clout at the cabinet table, and earned the grudging respect of Conservative-wary cultural types.

Glover was born in Saskatoon and moved to Winnipeg at the age of four. She is of Metis origin, and participated in an early French immersion program. With English speaking parents, her homework included listening to French radio – Radio-Canada's CKSB.

Things were not good at home. Alcohol was a "big problem," and she witnessed "many, many physical altercations" between her parents, she told CBC Radio's DNTO in an interview last year. She recounted a story where, at 15, she came home and saw what she thought was red Kool-Aid in the snow on the driveway. It was in fact a pool of blood – her mother had stabbed her father. In that same interview, Glover disclosed that her sister became addicted to crack. By 18, Glover was pregnant. She ultimately raised five kids – three biological children and two stepchildren with her second husband, Bruce, but she goes out of her way not to make a distinction among the kids. They range in age from 21 to 32.

"To think a pregnant teenager can work hard and commit to serving the public and eventually think big and dream big and get to positively make change in her country through this kind of a role, I'm pretty proud."

Glover studied justice and law enforcement at the University of Winnipeg but did not graduate. She joined the Winnipeg Police Service, where assignments included undercover work. That night where she met up with her old friends from the home for pregnant teens was a real eye-opener.

"I realized I could have gone down another track," she told the CBC. "I could have just as easily been them, were it not for my drive to succeed in school and go on to become a police officer."

In her almost 19 years of active duty on the force, she also worked on child-abuse investigations, youth crime and gang investigations, general patrol. She ultimately became a media spokesperson for the WPS.

So when she decided in 2006 to take a leave of absence to run for the Conservative Party nomination in the Winnipeg riding of St. Boniface, she was already a familiar face (she is still on leave). She was elected in 2008 and again in 2011, and has served as parliamentary secretary, and a member of the Heritage Committee.

She raised some eyebrows during the 2011 campaign when she told a reporter that the Liberal incumbent in another Winnipeg riding, then 68, had "passed her expiry date." There were cries of ageism. Glover said she was not referring to Anita Neville's age, but to her performance as an MP.

Since the 2011 campaign, Glover has been in a dispute with Elections Canada over her expense returns from that election, and until last month faced suspension from the House of Commons. She has since submitted a revised return, which Elections Canada accepted, but her campaign could still face a penalty for exceeding its spending limit.

As a rookie in cabinet, she inherits some difficult issues. The CBC, in particular, is in some disarray following the Conservative government's $115-million budget cut, the surprise departure of English services head Kirstine Stewart this spring, and the contentious Bill C-60, which critics say threatens the arms-length relationship between the federal government and the public broadcaster. The CRTC, which falls under Canadian Heritage, is launching an extensive review of the broadcast system this fall, with head-spinning changes in technology having a deep impact on the TV business.

There's also a controversial move afoot to change the name – and mandate – at the Canadian Museum of Civilization to the Canadian Museum of History, a change initiated by Glover's predecessor. Many arts institutions and organizations across the country are struggling as funding stagnates. On the west coast, the Vancouver Art Gallery has its hand out, asking Ottawa for $100-million for a new purpose-built facility.

Moore was able to distinguish himself in the portfolio despite the fact his government was perceived by some to be hostile to the arts. Instead, he was thought of as an ally, someone who was into it, tweeting often about Canadian music, films and museums. Glover's describes herself as having been "very involved" in arts and culture when she was younger. Her mother worked at the Winnipeg Folk Festival. Glover took dance lessons for 12 years and still loves the ballet, she says. She sent her kids to the Manitoba Theatre for Young People; now, her 25-year-old son is an actor who is performing at the Winnipeg Fringe Theatre Festival and is doing voice work for an upcoming animated series.

When asked about the last ballet she attended, Glover thought it was "probably the Nutcracker." She has not yet seen the Winnipeg Art Gallery's summer blockbuster 100 Masters: Only in Canada, which opened in May. The last theatre performance she attended was something her son was in, but she couldn't remember the name of his Fringe show. She did, however, visit the National Gallery in Ottawa before the parliamentary break, and she spoke at length and with great enthusiasm about the Festival du Voyageur, an annual winter cultural festival in Saint Boniface. She is also a supporter of Le Cercle Moliere theatre in Winnipeg.

When asked about the CBC, Glover said her government has always been committed. "We've said many, many times – and I believe very, very strongly – that we need a broadcaster that is fair and that is balanced, and CBC is so intricately important to my Francophone communities, particularly those that are in minority situations."

To constituents who wrote to her about the Conservative government's support of the CBC before the 2011 election, Glover responded in a letter, saying in part: "Although I am a big supporter of a strong, national, public broadcaster, I am very concerned about accountability within the CBC and I continue to monitor that situation with great interest." The letter was obtained by Friends of Canadian Broadcasting, which passed the contents on to the Globe.

Friends spokesperson Ian Morrison says he has concerns, not about Glover but with the appointment of a novice to the post. "We've gone from a Heritage Minister with clout to a neophyte person who has never been in cabinet before," says Morrison, adding: "The A Team has left the Minister's office."

But Moore was a cabinet rookie when he was named Heritage Minister in 2008, although like Glover he did work as a parliamentary secretary, and he had some experience in private broadcasting.

"We worked really well with James Moore, so we're grateful for what he was able to do for the arts community," says Melissa Gruber, steering committee member with the Canadian Arts Coalition. "He has been a pretty strong minister, so it could be exciting to see what she brings to the table. It's not necessarily a drawback if she's new – as long as she's sensitive to the priorities of the community."

Glover says her first order of business is learning her portfolio, immersing herself in briefings, meeting stakeholders and hiring staff. It's a lot of work – but the first words out of her mouth over the phone from Ottawa involve her excitement over the tremendous opportunity.

"We live in the greatest country in the world, where you can make mistakes and still have a dream and work hard and succeed," she says. "And here I am."

With a file from Josh Wingrove 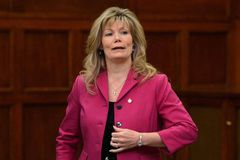