On its surface, Little America may seem like a show about immigration.

The Apple TV+’s anthology series, which began streaming on Jan. 17, tells eight separate stories of individuals from all over the world who, at some point, moved to the United States. The show is scripted, but each episode – from the Ugandan woman who risks everything to become a baker to an undocumented high school student who discovers her talent for squash – is based on the true, personal essays of immigrants, originally published in Epic Magazine, an outlet founded in 2013 with the intention of reporting stories that can be turned into Hollywood gold.

But when introducing Little America to a star-studded crowd at the launch of Apple’s streaming platform last March, executive producer Kumail Nanjiani wanted to make something clear.

“It’s not about telling immigrant stories. These are human stories that feature immigrants,” Nanjiani said. “When you get to know someone and start to see your struggles in their struggles, your passion in theirs, your problems in theirs, they stop being the ‘other.’”

Mehta directs “The Manager,” the opening episode of Little America about a 12-year-old spelling wiz, Kabir, who takes over his family’s Utah motel when his parents are deported to India. In an effort to raise awareness about his parents’ immigration case, Kabir competes in spelling contests, ultimately making it to the national finals and getting the opportunity to meet then-first lady Laura Bush. In his Epic essay, the real Kabir, Kunal Sah, says he used the opportunity to try and get his parents back. “All these kids here that are with me, their moms and dads are here. Mine should be, too,” he told Bush. But – spoiler alert – the first lady did not reunite this family.

The Indo-American experience has often been depicted through caricatures, such as Apu on The Simpsons, speaking in exaggerated accents or doing what Mehta calls the “Peter Sellers nod,” referring to the actor who wore brown face in the 1968 film The Party. “Immigrant stories” then focus on what immigrants have overcome, what they’ve had to do to assimilate, and ultimately how they were saved by white people, Mehta says – but in sticking to that narrative, she says “their humanity gets lost or their particular story, moments in their lives, gets lost.” That’s where Mehta feels Little America is different. Kabir’s story is about a normal life that is changed by something political, she says, and more than anything, it’s about a child who misses his parents.

“There are hardships, but they are human hardships,” she says. And though many of the episodes, such as Mehta’s “The Manager,” are set in the past, the challenges are extremely timely – which became painfully clear during the production of Little America’s final episode “The Son.”

Canadian writer-director Stephen Dunn first heard about the Apple TV+ series from one of the show’s executive producers, Lee Eisenberg, who at the time was working with Dunn on a reboot of the TV series Queer as Folk. Eisenberg wanted to include a queer story in Little America and sent Dunn an Epic essay written by Shadi Ismail, a gay Syrian refugee who was granted asylum in the U.S. and moved to Boise, Idaho. After reading Ismail’s story, Dunn was “floored.”

“For me, what I felt most connected to was this experience of having to rebuild your home and your family. When I was 16, I was kicked out of my house,” says Dunn, whose co-writer Amrou Al-Kadhi experienced similar rejection from their family. “As a queer person, experiencing trauma within your own family and home is something that’s unfortunately all too familiar for a lot of us.”

As an employer, it was particularly important to Dunn to cast queer Arab actors. However, despite being a British citizen, actor Adam Ali – who plays Zain, a friend of Rafiq’s (the character based on Ismail) – wasn’t able to get a work visa. It was due to Donald Trump’s travel ban, which bars citizens from multiple countries, including Libya where Ali was born, from travelling to the U.S. Rather than recast the role, Dunn and his team moved the production to Montreal. The irony of shooting an episode of Little America in Canada was not lost on Dunn, but it also reminded him of the importance of sharing Ismail’s experience.

“I think this is how you know you’re doing something right … when you’re having this many obstacles that come about from just telling a story,” he says.

And like Mehta, the creators behind “The Son” were very intentional in how this story was told.

Representation of the Middle East frequently features violence or terrorism, which is why, even though Rafiq’s story involves violence, it is never seen on screen. Dunn says that was done on purpose in order to refocus the story on Rafiq’s personal journey to finding safety and a place he could call home – whether that was a restaurant in Damascus or a gay bar in Boise.

“When Amrou and I were writing, we did not want to depict the Middle East as the scary brown land that he has to leave in order to find safety in glorious America,” says Dunn, adding that they chose to open the episode with a family dinner scene to emphasize “the beauty Rafiq unfortunately has to leave behind in order to be safe and be himself.”

Having seen the entire series, Mehta says that “The Son” and many other episodes will open people’s eyes to the multitude of worlds within American borders. Dunn adds that being able to tell underrepresented stories such as Ismail’s on Apple TV+, which is available all over the world, is powerful. However, according to Apple, “The Son” is currently unavailable in 11 regions, including Russia and the Middle East, because of local restrictions.

“We’re fighting really hard to make it available because these are the communities that we feel are most important to get it to,” Dunn says.

Both Mehta and Dunn have had viewers contact them saying how meaningful it was to see Little America, but for Dunn, the most poignant moment was when Ismail watched “The Son” at the Little America premiere in L.A. – which sadly, Ali was again barred from attending because of the travel ban. Ismail arrived hand-in-hand with his long-time partner, whom he had recently married. “There was just something so powerful about sitting in that room with Shadi and celebrating his story,” Dunn says. “It brought us all to tears.”

Little America has been heralded by multiple critics as the best show on Apple’s new streaming platform and it’s earned a higher than 90-per-cent rating from both critics and audiences on Rotten Tomatoes. The series has already been renewed for a second season and, while it will continue to focus on the stories of immigrants, Mehta and Dunn agree that this series is about so much more.

“We use a lot of labels to differentiate ourselves from ‘others’ and the reality is that the whole country is built of immigrants and we’re all from other places and we’re all displaced,” Dunn says. “The reality of immigration and immigrants is that it has an impact on people’s lives, but it doesn’t define who they are or what their value is or whether or not they have the right to be the centre of a narrative.”

Opinion
Little America: Great stories about immigrants – and what Canadian TV should be doing
February 4, 2020 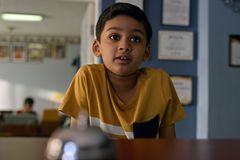 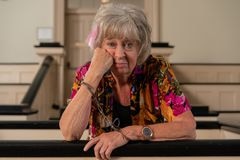 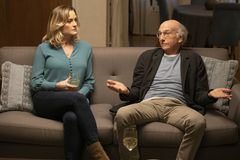