The coronavirus has thrown the planet into crisis: The death toll mounts, social life is restricted, planes are grounded, most travel is out of the question. Professional sports are halted. The performing arts have stopped performing. People are confined to their homes as we all try to flatten that curve and prevent more deaths.

On the surface, that means a boon for television, both conventional and streaming. Television is the one crucial source of entertainment and information. The audience is bigger and hungry for escapism. Suddenly, television has immense relevance.

That relevance will continue but TV as we know it will change, shrink and shrivel. Accustom yourself to multiple genres of entertainment now, get used to foreign-language content with subtitles and feast on the vast library of content that exists, because the industry is shutting down and the outlook is ominous. This era of what’s called Peak TV, with the number of original scripted dramas and comedies topping 500 shows a year, is probably over.

This situation is way, way bigger than what’s happening this week, with late-night shows suspending production and Jimmy Kimmel, Jimmy Fallon and Stephen Colbert producing makeshift monologues from their homes. That’s the cutesy part of the situation. Consider the sober part – in the United States, the union IATSE (International Alliance of Theatrical Stage Employees, Moving Picture Technicians, Artists and Allied Crafts) has reported the loss of 120,000 jobs because of coronavirus-related production suspensions and cancellations.

Daily, now, my inbox has bulletins about new shows being shifted from next month to “a later date.” Typical is the situation of FX’s Fargo, with Season 4 set to premiere in April. Most of the episodes have completed production, but not all. And production (this season in Chicago unlike previous seasons, which were made in and around Calgary) has been halted by the coronavirus. When the series, one of this year’s most anticipated, starring Chris Rock, Jason Schwartzman, Jessie Buckley, Ben Whishaw and Timothy Olyphant, will actually air, is anyone’s guess.

According to The Hollywood Reporter, 60 drama and comedy pilots were being made by the five U.S. broadcast TV networks to potentially air in the 2020-21 TV season and "most” had begun production, but all of them have shut down. Yes, all of them. Take note that your favourite network show may end its season sooner rather than later. A TV show’s production involves a huge number of people working together – all those names on the credits you never look at – and it’s simply impossible to have that many people together at the moment.

Further, there is the domino effect that cancellations have on advertising revenue and the subsequent lack of cash to spend on developing new programming. CBS will lose tens of millions in expected revenue from the cancellation of the NCAA basketball tournament. Last year’s March Madness tournament generated about US$600-million in advertising for its broadcasters. Cancellation or postponement of the Summer Olympics would be disastrous for NBC Universal, which spent vast amounts on Olympic broadcast rights for the next decade.

The surreal irony is, of course, that all of television is seeing an increase in viewers. On Tuesday of this week, every show in prime time on the five U.S. networks had more viewers than the previous week. Based on viewing patterns in past crisis periods – mainly extreme-weather events – Nielsen is predicting that the use of streaming services might increase by 60 per cent in the next while, as social distancing, self-isolation and quarantines have an impact.

What those new and returning viewers need is content, and while the libraries of Netflix and Amazon Prime Video might look like an endless list of shows and series to suit every taste, the list is actually limited, not endless at all. Eventually, the library won’t be restocked. All these actors, writers, directors and the production-crew members might be staying at home, just like you. Enjoy the seeming vastness while you can.

At the suggestion of many readers, this column will have a “Stay-at-home-period daily streaming pick” for the next while. Today’s pick is Intelligence (on Netflix). It’s a Canadian drama, not new but an absolute classic, up there with the best from anywhere. CBC aired it from 2005 to 2007 and it should never have been cancelled. “Compulsively watchable,” said the New York Times review, connecting it to The Sopranos and The Wire for its “novelistic richness.” All true. Set in Vancouver, and created by Chris Haddock (Da Vinci’s Inquest), it is a wonderfully layered, dryly funny and substantial series about organized crime and the career cops who watch and manipulate the criminals. It’s about grey areas where the watchers connive and the watched are highly aware. It’s about doing business – any kind of business, legal or criminal – and sometimes it’s about “them and us.” “Them” being the United States, of course. 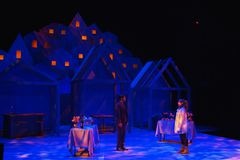