You can tell a lot about the circles in which George Clooney moves by what he’s insistent on saying at the end of an interview, not the beginning. The thing he wants to leave you with.

In this instance, his parting words amounted to a wee speech about “the press hounding Meghan Markle.” He was deeply serious: “Look at what happened with Princess Diana. It’s disgraceful.”

Clooney and his wife Amal were wedding guests when Prince Harry married Markle. He is, as mega-movie star and producer, celebrity royalty. Mind you, his protective feelings about the Royal Family and anger about media coverage were not, in this particular circumstance, delivered to the ideal audience. He was talking to a very small group of TV critics in a room in a hotel in Los Angeles and we were there to discuss his involvement in the six-part adaptation of Joseph Heller’s classic anti-war novel Catch-22. The paparazzi, we are not. We are the Television Critics Association.

The last time he spoke at the critics’ press tour was 25 years before, when ER thrust him into TV stardom. Although his name has appeared as producer on an occasional series since then, and he did a one-off, live TV performance of Fail Safe in 2000, he’s a movie guy. With Catch-22, he’s executive producer, directs two episodes and stars. What’s he doing?

“I’ve been lucky in my career,” he says. “Some things have been easy, and sometimes you want to do something hard. Part of the challenge here comes from seeing the excellent TV being made and wanting to make something just as good. By the way, I’ve never been a snob about TV. It’s all about the content for me, the quality of it.”

The adaptation of Heller’s novel for Hulu (in Canada on City TV’s City Now platform) seemed a monumentally hard task from the get-go. The book is non-linear, shifts haphazardly and events are refracted through the mind of a character, Yossarian, who is intent on claiming insanity. A 1970 movie version directed by Mike Nichols stripped the novel to its bones to be coherent and discarded some characters and incidents.

“You learn a lot more about the characters in a six-hour TV drama,” Clooney says. “When they die, you care more. There’s [a lot]of dying in this story. You didn’t fully know the characters in the Nichols movie. No disrespect meant. I know Mike Nichols. Here, keeping the arc of the story was a challenge, but you’re trying to do justice to a classic novel.”

Was he very familiar with the book?

“Yes, I read it at school. It was a book you were encouraged to read, like you were supposed to read Catcher in the Rye. I found it a dense book, challenging to read but deeply rewarding. It’s about war, but it’s not about heroism. When the idea for this project came up, I read it again. And it’s a book that doesn’t let you down when you reread it 40 years later. These two knuckleheads hadn’t read it, though."

By “knuckleheads” he means Christopher Abbott who plays Yossarian, and Kyle Chandler, who plays Cathcart, the slippery, ambitious officer who keeps raising the number of missions that the military pilots at the centre of the story must fly. Both are sitting beside Clooney, but are mostly silent.

Chandler, however, has a summary of Catch-22’s themes. “It’s very dark and darkly funny, and in part it’s about people being able to find humour in the face of the terrible darkness of war. I think it’s all deeply relevant because history repeats itself and what happens in Catch-22 will happen again, but in reality, not just as a story.”

Abbott’s role as Yossarian is incredibly demanding. At one point, the character goes naked to illustrate that he’s lost his mind. “My style is to pretend that nobody will ever see this drama,” he says. “I’m having to be nude, and to deal with it I have to forget this will be seen by anyone.”

Clooney wants to return to the theme of how attractive TV is these days. “Netflix is a godsend,” he says. "For independent creators, for people looking to push limits. You can make a movie drama for $6-million, but it costs $30-million to market it. Studios just don’t want to do that. The economics are terrifying. Netflix takes care of all that. It takes care of everything.”

In Catch-22, Clooney’s role is Lieutenant Scheisskopf, a painfully ignorant but grandiose man who shouts ceaseless insults at the men he’s training. He is the epitome of the military’s obsession with parades and petty rules.

He’s asked if he enjoyed the bombastic bossing of other men while playing the character. And he replies with a joke: “I’m the executive producer so I’m the boss anyway!”

He is indeed. It’s why this remarkably cutting satire of military arrogance, dark rumination on the absurdity of war – and fine adaptation of a classic novel – got made. It’s a stunning return to TV for Clooney. The wee speech he ends with, about the paparazzi, can be forgiven.

Opinion
The unmissable Fleabag returns on Amazon Prime Video, but approach with caution 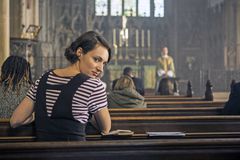 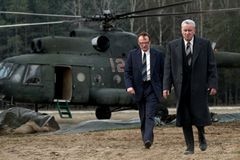 Opinion
Dead to Me is a black comedy alive with wit, mystery and melancholy on Netflix