Former Canadian astronaut Chris Hadfield says he has no idea who will star in the pilot for a TV sitcom based on his first book: An Astronaut's Guide to Life on Earth.

"My wife watches a lot more television than I do, so she's got some ideas," Hadfield said Monday. "I think that character will probably be as close to reality as any character in the show."

Hadfield told The Canadian Press he was first approached by Warner Brothers about a year ago after they expressed interest in the book.

"They wanted to see if it can be made into something on television and then they worked with the major networks in the U.S.," he said, adding the comedy is expected to have the same title as the book.

"In August, my wife and I went down and went around with the president of Warner Brothers to all of the major U.S. networks."

Hadfield said ABC decided to take it on, adding he's now working on the pilot with writers to ensure they have enough material.

"I think the way the cycle works is they film pilots in the winter [and] spring and then, assuming this all works and it's going really well so far, it would be on television in the fall," he added.

The sitcom, he noted, would combine the difficult, technical work of being an astronaut and the demands of family life.

"The idea of it [is] how do you integrate the complexity and demands of this particular type of human being into the normality of life," he said.

Hadfield made the comments in an interview from Toronto where he was officially launching his second book: You Are Here: Around The World in 92 Minutes.

It's a compilation of about 200 photos that Hadfield took during a five-month mission aboard the International Space station that ended in May, 2013.

Hadfield said that as far back as February he first started looking at 45,000 photographs that he took while circling the world's different continents.

"It was fairly easy to get it down to a couple thousand," he said. "I just used my own particular intuition and tastes and sometimes memory."

The photos chosen for the book were his favourites, adding that some are also entertaining.

"I found a few islands that look like fish," he said. "I just thought it was really funny to see an island shaped like a fish – or that island off the edge of Turkey that looks like a cartoon exclamation point."

The 200-page book also includes the photo of a meteor crater in the central African country of Chad that reminded Hadfield of a piece of Cheerios, his favourite breakfast cereal.

He also captured formations in Paraguay that looked like human brains.

"The colouring was even brain-like," he noted. "It just looked like young Frankenstein sitting there, it was just bizarre to see."

The former astronaut also stressed he didn't put together the book to make money.

"I'm not doing this to get rich," he said."I'm doing this just because I don't want these pictures to languish and be lost – they are a snapshot of the world that hopefully everybody can learn a little something from."

Hadfield said a portion of sales proceeds will be donated to the Canadian Red Cross.The Canadian Press What Chris Hadfield learned from taking photos from space
October 17, 2014 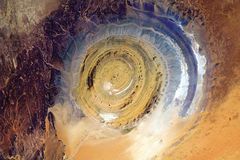