Jad Abumrad, the most talked-about person in public radio right now, is staring at the culprit to blame for his own exhaustion.

On the computer screen in his cramped office at WNYC in New York's SoHo neighbourhood is a picture of the mix of a recent episode of Radiolab, his nationally syndicated show about science and big ideas. Where a typical radio show might have four or five layers of sound in its mix – a horizontal bar for the host's narration up top, followed in orderly fashion by a clip of an interviewee, lying on top of long bars of background sound or music that fade into each other – Abumrad's mix is a visual cacophony.

Pink and green and purple bars are choppy and short, overlapping in a pile as voices cut each other off, tiny sound effects snap the ear to attention and musical pieces he has composed weave through the story.

This is what kept Abumrad up late into the night. The creator and co-host of Radiolab has set a standard for a show that is complex, painstaking and unbelievably labour-intensive to make. Abumrad and his co-host Robert Krulwich, along with eight full-time staff, plus interns and temps, work what Abumrad calls "unjustifiable hours" to get it on air. But he has also taken a medium that is more than a century old and created something that sounds new. As a result, a program about science, of all things, has made public radio sexy.

" Radiolab has invented a sound that won't put off smart people who should be in our audience," Ira Glass, the host of radio hit This American Life, wrote in a tribute on Transom.org last month. "It's no surprise that a much younger audience loves Radiolab. It's no surprise that a huge part of its fan base is people who don't consider themselves public-radio listeners."

In that sense, Radiolab has benefitted from the legacy of This American Life, which for 16 years has been appointment listening for the tried-and-true, older public-radio demographic. Through terrestrial radio on more than 500 stations in the United States and Canada, This American Life reaches roughly 1.8 million people per week, but has also found a younger audience via podcasting; its podcast racks up another 700,000 downloads per week.

In fact, public radio in general sees a much younger listenership coming to shows through the Internet: The median age of NPR's radio listeners is 50, for example, but for podcast listeners, it's 33.

Radiolab's audience is much larger in podcast form, where the listeners tend to be younger. On-air through radio stations across the United States, its roughly 10 full-length episodes a year attract an aggregate audience of roughly one million – but in podcast form, it has roughly two million downloads per month, in 223 countries.

And Radiolab has achieved this reach without catering to the lowest common denominator: The show covers big topics such as a mathematical formula for the makeup of cities, or the tension between natural selection and altruism. But it does so with a casual, conversational tone that sneaks up on listeners before they have the chance to find those topics daunting. It has convinced some big names in this little business that Abumrad could be building the future of radio.

"It feels like it's almost evolutionary," says Jonathan Goldstein, the host of WireTap on CBC Radio, a former producer at This American Life and, like nearly every radio producer out there, an admirer of Radiolab. "It's a show that's thinking in the language of radio."

The show uses any tools it can to illustrate the ideas it presents and hold the listener's attention: tiny musical compositions, for example. Sound effects such as eerie echoed munching noises bring the listener to the ocean floor where scavenging hagfish devour a whale corpse. Layered voices talking on top of each other pass the story from person to person, just like in a real conversation. And rather than the formality of introducing each new speaker that listeners are accustomed to, these appear with the sound of throat clearing or a quick "ready?" before they are even introduced.

For Abumrad, all this evolution is about fighting back against what he calls the "tune-out moments" of conventional storytelling and using the language of sound to jolt his listeners out of the inertia of the familiar.

Abumrad, now 38, did not start out in radio – he was a musician at first, hoping to make his name writing film scores. After struggling to break in, he decided to try something new. He began volunteering at New York community radio station WBAI; later, he landed a job at WNYC where Radiolab was conceived; in 2001, Abumrad was given a chance to host a three-hour show on Sunday nights to a minuscule audience because of the station's reduced range during that time period.

It was about science from the beginning, but Abumrad began introducing music and effects to "shoot the gaps" of time he spent talking or playing interview clips. He met public-radio veteran Robert Krulwich, now 64; the two hit it off and began informally trying out ideas in the studio. Krulwich came on board as co-host in 2005.

Today, the Internet has expanded the show's reach exponentially, bringing it a long way from its humble beginnings. And people are taking notice. Late in 2011, Abumrad earned a coveted MacArthur Fellowship, a $500,000 (U.S.) prize also known as the Genius Award.

The aesthetic of the show is due in no small part to the banter Abumrad has with his co-host Krulwich. The pair are funny and self-deprecating, and they admit it when something confuses them. And they balance each other out: The bespectacled Abumrad has a soothing, mellow tone, while Krulwich has a more animated, nasal voice and a slightly goofier attitude.

"They're like the Chuck D and Flava Flav of public broadcasting," says Goldstein. "Robert is the treble to Jad's bass."

His musical comparison is apt: The other thing that stands out about Radiolab and the new sound it has created is its musicality. A recent episode used little melodies written as theme and variation to illustrate how enzymes copy a virus within a cell and mutate to find ways around a creature's immune system. In another episode, Abumrad penned leitmotifs for three chemicals in the brain (dopamine, norepinephrine and oxcytocin) that create feelings of love and affection in humans. Music and sound is woven in to set scenes or punctuate important points.

This complexity is what Abumrad sees when he looks at that multicoloured mix of an episode on his screen.

"The flow begins to look a little bit like a score. This is like an aria," he says, pointing to a line of sound that is his introduction and then moving his finger across to where pink and green and purple lines dot the screen. "Then, suddenly the orchestra enters – BAHM – and then you have the sort of melodic lines on top … you go from, like, a duet, to this, like, sextet right here."

Listener Colleen Joyce, a 29-year-old living in Victoria, noticed the show sounded different to her. She's also a fan of WireTap and This American Life, and she discovered Radiolab in the fall. Joyce downloads the podcasts or listens over the Web on her computer. Canadians now account for 24 per cent of visitors to radiolab.org, part of a growing international listenership.

"It's totally accessible, which is awesome. I think that's a trend in radio, and especially podcasts, making it accessible," she says. Then she lapses into a conversational quirk of most Radiolab listeners: "Did you hear the one about choice?" she asks, then begins relating a psychological experiment involving people's perceptions of others when holding hot drinks versus cold. Describing scientific theories is an occupational hazard of being part of the show's audience.

Abumrad hopes to use the money from the MacArthur grant to possibly hire a babysitter (he has a second child on the way), but also to give the show a chance to do new things, find ways to keep it fresh and bring new voices in.

"My hope, I guess, is that you turn on the show, and it hits you a little bit differently," Abumrad says. "... But most of the time that we're here, we're just trying to make stories that make sense."

Radiolab airs at various times on public-radio stations across the U.S., and the podcast is available at radiolab.org. 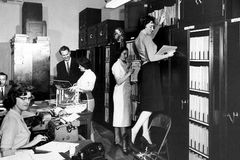