Swedish writer Hans Rosenfeldt, creator of the classic Scandinavian drama The Bridge, has made a murder mystery for British TV, and it's very good. Not a classic, mind you, but a gripping, contorted puzzle. And for lovers of British crime drama, it's a very pleasant puzzle.

Marcella (now streaming on Netflix) has, like The Bridge, a complicated female cop at its core. That's Marcella herself (Anna Friel, who is wonderful in an exacting role), a cop who took time off to be with her family and is drawn back into police work because, you guessed it, a killer who stopped killing seems to have returned and is on a spree. There is a lot of gore, some brutal violence and more seemingly meandering threads than you can count.

Like his heroine in The Bridge, Rosenfeldt's Marcella has some mental-health issues – in her case, a tendency to suffer blackouts. These blackouts occur when she's committed violence. How violent is she? Well, since she can't remember, the viewer is left in a state of horrified tension.

Not far into the first episode, there's a scene in which Marcella kicks her ex-husband out of the house. Minutes later, she's dazed and confused, not sure what has happened. She is obliged to try to reach her ex on the phone to ask, more or less, "Did I just beat you up?" This puts the enigmatic opening scene in some perspective. Our first sight of Marcella is of her sitting naked in a bath. There's blood and she is injured. Our immediate instinct, since we seem to be looking at a vulnerable female character, is sympathy for what has been done to her. Now, 20 minutes later, we can only wonder if she has done brutal violence to somebody else.

As her blackouts occur, the narrative is, of necessity, not the sequential one we think it is. Things are left out. This makes the miniseries a true puzzle – it's not just that Marcella is an unreliable narrator; it's that she cannot function as one even if she tried.

The theme established by the main character's tendency to violence grows and spreads. It is, in fact, the distinguishing characteristic of the series. No sooner have we made the acquaintance of the ex, Jason (Nicholas Pinnock), then we are aware he works for a construction company run by a matriarch who is more frightening than most of the suspects being quizzed about the murders. Sinéad Cusack plays the matriarch and is, apart from Marcella, the most compelling character in the series. Her icy contempt for the niceties of big business feels more lethal than a killer with a knife.

What we get, then, is a deep sense of unease about who is more ruthless – the strong female characters or the vaguely menacing men who are interviewed by the cops about the murders. This is not a series to watch blithely. It is necessary to pay very close attention to each character as they are introduced. Women lie, cheat and steal. The character you think is the next victim is nothing of the sort.

At the same time, there is one victim we can be certain about, and that is London itself. An underlying theme, and far from subtle, is the reckless new development of old London. There is a cynicism in the industry that employs Marcella's ex-husband, and it is clear how Rosenfeldt feels about runaway development and steel towers replacing ancient brick: He thinks it is the most savage crime of all, on a par with murder.

Not that the series wanders off into showy symbolism or angst about urban development. It is a rigorously structured murder mystery. Marcella, the returning cop, does what such characters always do: She embarks on a solo investigation, following suspects and creating her own narrative.

At the end of the first hour, there are three dead bodies and violence has also been done to a man and a car. You are reeled in by the twists and, at the same time, aware that a few red herrings have been strewn about. You're wary but you will be ready to binge-watch the rest.

Heed this, though: The heroine, that cop with the big eyes, lonely looking and occasionally in tears, is not the sensitive soul you are tempted to put in a box marked "victim." There is terrific obliqueness in Marcella. The boundaries of the crime thriller are blurred and twisted here. It is highly recommended as a vicious brainteaser of a drama. 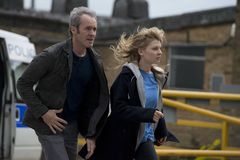 John Doyle: The heartbreaking accuracy of theatre life in The Dresser
May 31, 2016 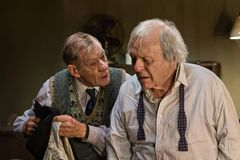 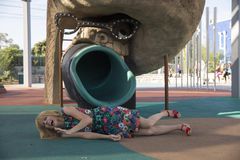