"What will survive of us is love," wrote Philip Larkin, contemplating tombs and memorials. He was right but what survives in official history is the story of everything as told by men.

Outlander (Sunday, Showcase, 10 p.m.) returns for its second season and a key part of its glorious richness is the perspective of a woman, Claire (Caitriona Balfe), on a vital event in the history of Scotland.

As the story moves forward – elusive, romantic, sexy, at times brutally violent and coarsely human, as human life is – we find Claire and Jamie Fraser (Sam Heughan) have fled Scotland for France. There, the plan is to impede the coming Battle of Culloden, which Claire knows will decimate the highland way of life and reverberate through the history of countless clans, families and countries.

In pure plot terms (telling close details of what happens is restricted by unusually tight embargoes), what unfolds is that, thanks to Jamie's cousin, a wine dealer, the couple and their little Scottish coterie live among the rich and the royal. They insinuate themselves into the Jacobite movement anchored in the hopeless hands of the deluded Bonnie Prince Charlie.

What we have is a gorgeously concocted costume drama (the sets and costumes are stunning), but what makes Outlander a drama so passionately embraced by viewers is the living, breathing authenticity of the two main characters. Especially Claire.

And what heightens the series to the level of jaw-dropping dramatic art is, first, the subtly unorthodox female perspective and, second, the successful establishment inside the principal storyline of the transforming power of adult love in all its aspects – pleasure, longing, frustration, jealousy, fear, grief and guilt.

What it means is, well, what Claire has learned from spending time in the French Court. And while it is a brief segment in the sprawling story, it is vastly illuminating. Most history, as we know it, amounts to the biography of great men, their psychology, habits and leadership. What women did, day to day, is unknown or ignored.

In Outlander, the narrative can shift into terrible, rebarbative darkness. The last episodes of the first season are testament to that. And it is an emphatically male, violent and cruel darkness. In the new episodes, Jamie is still suffering post-traumatic stress from what he suffered at the hands of Black Jack Randall.

In this circumstance Claire is more than nurse or coddling wife; she is the force that drives everything forward. And Balfe, by the way, continues to be remarkable – there is nothing emotionally circumspect about her portrayal of Claire.

This second season does drift away a bit from the original material, Diana Gabaldon's Dragonfly In Amber, the second book in the Outlander novel series. That is all that can be said specifically, but devotees of the novel can be assured the narrative shift strengthens the series.

"I wished I were dead," Claire says at the beginning, and talks about "touching the edges of oblivion." We see her, alone and a tiny figure in the huge scenery of mountains, valleys and enormous skies. But she knows she is hard-headed enough to survive anything, whether it is the rough life in the Highlands or the French Royal court with all its personal and political intrigues. "She's a sturdy woman," Jamie says of her shortly after they arrive in France, which might be the understatement of the entire series while it simultaneously explains everything.

Outlander has been called many things, often erroneously, but the critical acclaim given the ending of the first season at least removed the term "bodice ripper" from most descriptions. It is formidably complex in its layering of history, fantasy, romance, politics and violence. Above all, though, it is uninhibitedly direct in its assertion that history is very different when seen through the eyes of a sturdy woman.

We know the Battle of Culloden happened and a culture was almost wiped off the face of the earth. That cannot be changed, but what survived is, as Larkin said, love. And Outlander is a truly outstanding drama about that. 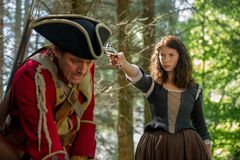 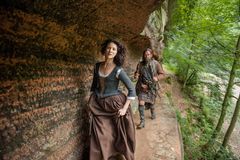