In the early hours of Nov. 9, as the shock wave of the presidential election result rolled across America, John Oliver stayed up to watch an episode of RuPaul's Drag Race.

After Donald Trump delivered his victory speech, Oliver says, "I didn't want to go to sleep and I couldn't work out what to do." So he turned on the hit reality-TV show, in which drag queens compete in tests of their talents. "It seemed like the opposite of what I had just witnessed and it was" – he lets out a laugh – "more reflective of the America that I want to live in than the one articulated by the then-president-elect."

Like some in America, Oliver is looking for ways to cope with his new reality. The last time he was on television, in late November, he stood next to a giant sign reading "2016" that he then blew up, walking away as the numbers smoked, burned and collapsed.

When his show, Last Week Tonight with John Oliver, returns to HBO Canada on Sunday night, the tone may be less nihilistic but in no way reassuring. Comedy, in Oliver's view, isn't going to save anyone. But his job this year is to ensure it continues to surprise people. One constructive role he can play now, he says, is to carve out a space where Trump does not entirely monopolize the audience's attention.

"I don't want to get sucked down the wormhole of having to deal in personality politics," he says. "Politics at its worst is just driven toward personalities, not issues, and [Trump] is the embodiment of that."

One of the problems with the American presidential election, Oliver says, was that it took "all of the protein out of a news cycle … to a really detrimental effect." Oliver and his team made a conscious effort to resist that dynamic by giving attention to topics "that deserved to be talked about more, rather than the election, which really deserved to be talked about less."

He says he's going to try to maintain that balance now. All of Last Week Tonight's main segments prepared since January have not focused on the president (although that's partly because such topics can't be tackled so far in advance, given the whiplash-inducing churn that is now the daily news cycle).

Oliver is happy, though, to flagellate himself for the appearance which he made on The Daily Show in 2013, back when Trump's candidacy was still mere speculation. "Do it. Do it!" he said then, speaking directly to Trump through the camera and urging him to run for the sheer comedic spectacle.

That was "me being the worst embodiment of that kind of cocky, 'Oh, this will be fun,'" attitude, Oliver says now. "It was awful. I don't think it did anything, but I think it embodies something that is repellent."

He is aware of the tendency among some famous comedians to believe the world revolves around their work. But Oliver says it would "be arrogant beyond belief" to think that he has any ability to impact outcomes in American politics. "I do not think I have the power to move the needle even a fraction."

On the day of our interview – in a windowless conference room at HBO's headquarters near Times Square – Oliver is genial and polite and relaxed. When he warms to a topic, he slides his swivel chair backwards to gesticulate. One of the singular things about Oliver as a comedian is that those topics can range from U.S. politics to, say, the process of demonetization in India (the government took much of the country's paper currency out of circulation to combat the underground economy, causing chaos).

A little bit before our meeting, Trump spoke at a military base and accused journalists of not reporting on terror attacks for unspecified reasons. Such claims strike Oliver as both ludicrous and dangerous.

"The only thing you can do now is take him at his word, right?" he says. "There's no reason not to believe that he means everything he says." Oliver recalls a remark once made by former president Barack Obama, who asserted that the office of the presidency humbles its occupants. "He was wrong about that," says Oliver dryly.

A 39-year-old Briton with an immigrant's devotion to America, Oliver isn't going anywhere (although he fondly recalls the Grade 8 year he spent in Kingston, Ont., where his aunt still lives). Now he's married to a "turbo-American," he says, referring to his wife's previous service in the U.S. Army. Last month she joined the Women's March following Trump's inauguration while Oliver watched their young son, who had a cold.

"People are going to have to stand up all the time and it is going to be exhausting," Oliver says. "It's easier to do on adrenalin and harder to do when you're tired." But he doesn't think he has any role in rallying the opposition.

"The reason we do our show is to make jokes about things that are interesting to us – that's the fun thing, having the resources to deeply research stories that we don't initially know a great deal about," he says. "I don't think it's a different path going forward."

As I stand to leave, I wish him good luck. "And to you," he responds. "That's the classic immigrant goodbye – good luck." He laughs. "See you on the other side." 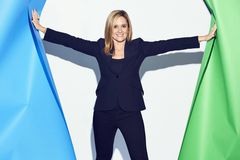