Cleve Jones is having a moment. He sits down at his local favourite, the Cafe Flore, in San Francisco's Castro neighbourhood, and through the window across from him, he catches sight of a luridly coloured billboard advertising the miniseries When We Rise. This series – airing this week on ABC and streaming from various sources thereafter – tells the story of his rollercoaster ride of a life to date.

In a nutshell, Jones fled from Arizona to San Francisco as a young man in the 1970s, became a protegé of gay city supervisor Harvey Milk, helped lead his community's response to Milk's assassination and AIDS, came up with the idea of the AIDS Quilt in the thick of the crisis years, and, more recently, helped quarterback the legal strategy that got the U.S. Supreme Court to declare gay marriage the law of this land.

The billboard takes him back, since printed on it, in big letters, is something a Quaker lady said to him long ago: "It matters not who or how thee love." A spiritual seeker as a teen, Jones was trying on the denomination for size. The woman, a church elder, came across him as he was fooling around with another boy, and instead of telling his parents, as he worried she might do, she spoke these comforting words to him.

He says he considered committing suicide as a teen in his small white-bread suburb of Phoenix, but came across a Life magazine article featuring some gay activists, many of them based in San Francisco. "The movement saved my life. It's not hyperbole, it's true. Twice it was true. That article, and, later, after I got HIV, the movement pushing for AIDS research – both saved my life."

The line about the movement saving his life is the first line of his recently released memoir, also called When We Rise. "I woke up with that line in my head." Jones wrote much of the book, he says, when staying at the L.A. home of the miniseries's writer Dustin Lance Black, who won an Oscar in 2009 for his screenplay for Milk.

Reached by phone, Black speaks about this unusual co-working arrangement, one that helped give birth to both projects. "Working parallel, I got to ask Cleve questions as I went along, and I read his completed manuscript."

The city Jones came to was radically different from the expensive tech hub it has lately become. Thousands of gays and lesbians were flooding there each week, coming, mainly, from small towns around America. "It was romantic; you said hello to each other," says Jones, who remembers a stranger inviting him to a hidden treehouse in a park for a joint and a tryst.

"And the creative energy unleashed when you had choreographers, filmmakers, dancers, poets, painters and actors, all inhabiting the same space." One of the first friends he made was the singer Sylvester, whose disco hit, You Make Me Feel (Mighty Real) was one of the disco era's anthems.

But not all was joyous, flamboyant liberation. "There was this sinister feeling, this undercurrent of violence." The Zodiac and Zebra Killers were on the loose in the city; heiress Patti Hearst had been kidnapped; members of Jim Jones's Peoples Temple were cruising around town seeking recruits for their doomsday cult. "Guys, fag-bashers, would come to the Castro then. I was beat up, stabbed once by neo-Nazis."

As one drugged-out character in the miniseries says, "The Summer of Love had turned into a winter of heroin."

And, of course, shortly after the the openly gay Harvey Milk gets elected – hiring Jones to work in his City Hall office – he is assassinated. "I had never seen a dead person before," Jones says. "What kept going through my mind as I looked at his bloody corpse was, 'It's over, it's all over. Everything we hoped to do.' But then to stand in that ocean of candlelight in the parade after his death, with so many different people, I knew, very clearly, that it was far from over."

In the miniseries, the young Jones is played by Austin P. McKenzie, the older man by Memento's Guy Pearce. Black's script also focuses on three other individuals who came to San Francisco in the heady 1970s: Roma Guy, the feminist founder of the Women's Center in the Mission district (played, at different ages, by Emily Skeggs and Mary Louise Parker); her girlfriend, now wife, Diane, who worked as a nurse on a local hospital's AIDS ward for years (Fiona Dourif and Rachel Griffiths); and gay African-American Vietnam veteran Ken Jones (Jonathan Majors and Michael Kenneth Williams).

"I had this long checklist I wanted for the characters," Black says. "I wanted them to be involved in other social justice movements. The peace movement, the women's movement, the black civil rights movements. The gay rights movement didn't happen in a vacuum – it was about making connections, to seniors, workers, immigrants. I wanted to feature activists – ones who were still alive. So, there was a pretty short list of people at the end."

"They were," Jones says, "all friends of mine."

The aim for the series was panoramic – it's been jokily called a gay Roots – and it follows these activists from the 1970s to now, from Harvey Milk's gay-lib era – via the bathhouses, women's support groups and AIDS wards – to gay-marriage litigation.

It shows Diane choosing to do something that was then rare, choosing artificial insemination and raising a child first alone, then with her lover, Roma Guy, who, in turn, fights for recognition for lesbians in both the women's and gay movements. Ken Jones also has to fight on two fronts, tilting at the racism within the gay community and the homophobia in the black community. When he loses his longtime lover to AIDS, that lover's genetic family kicks him out of the house shared by the two men and onto the streets of San Francisco, where, for a time, he spirals downward into drug addiction.

Both the book and the series show some New York-based ACT UP activists criticizing Jones at the height of the AIDS crisis in North America for the quilt project. "They were angry that we were quilting to mark the dead, saying we needed to be fighting for the living. I supported ACT UP, what they were doing. Both things helped. The quilt was reaching parts of the country, the middle, that ACT UP was not reaching."

Though the series covers some tough territory, there's a leavening wit and sexiness to it all – and to Jones's memoir. Both offer up a lament for, and a celebration of, a lost but utterly influential time.

"You know, as I was writing about the early days, I found I really enjoyed it, bringing back to life some of the people and the impossible sweetness of it." The book and miniseries both lovingly convey some of the boys lost to the Plague – Sylvester and Marvin Feldman, a charming actor and theatre-queen, whose quilt-panel Jones made.

At the end of our interview, I ask Jones if he knew that he was living in the middle of history. "We all knew it, that we were participating in something that was brand new. I went home for the holidays one year, and my mother and I stayed up and talked one night. She said, 'You know, you're living in one of those periods. When you're older people are going to be writing books and making movies about what you're living through right now.' There was just this – electricity to it all." 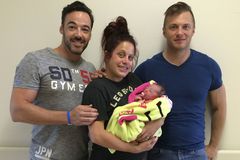 Review
Studio 180’s My Night With Reg is a poignant look at the AIDS crisis
February 16, 2017
Follow us on Twitter @globearts Opens in a new window
Report an error Editorial code of conduct
Due to technical reasons, we have temporarily removed commenting from our articles. We hope to have this fixed soon. Thank you for your patience. If you are looking to give feedback on our new site, please send it along to feedback@globeandmail.com. If you want to write a letter to the editor, please forward to letters@globeandmail.com.
Comments