"It was a political murder. It absolutely was. This was a person who targeted people specifically to shame them and to out them and to have a form of payback for a life that he felt he could not live."

In his remark about "political murder," Murphy was responding to a quibble about the title. See, the series is really about Andrew Cunanan (Darren Criss), who killed Versace and four other men. Much of it is about Cunanan scheming and lying his way into people's lives and then murdering them. Gianni Versace (Edgar Ramirez) was just the famous one. It's also about the hunt to find Cunanan, tracking his movements and the inept attempts to connect him to multiple crimes.

As such, the drama, which has some stunning visual opulence, has multiple themes and threads. It can be an agonizing, thrilling and disturbing thriller to watch. It opens with Versace beginning his day in his lavish Miami Beach mansion and switches to Cunanan loitering on the beach nearby, presented to us as a shady character with some unknowable but obviously dark intent on his mind. Then he shoots Versace on the steps of that mansion and flees.

From there, the drama shifts and turns constantly, but is never unintelligible in its twisting approach to the entire story. And entirety is what Murphy is aiming for. He also has two central themes – first, the assassination of Versace made Cunanan's murders a celebrity story that left the other victims forgotten and, second, he nourishes the idea that lies and the putting on of masks are human actions that cover up a core duplicity at the heart of awful human frailty.

The series is essentially Cunanan's story but we learn a great deal about Versace and his family. He is portrayed as an earnest craftsman who is mostly shy but, aware of his celebrity, given to an extrovert sexual ostentation that he kept hidden inside the closed world of his friends and lovers. There is also a mordant, underlying suggestion in the treatment of Versace's private life – in 1997, it was still common for a gay man to keep much of his life hidden.

The structure of the storytelling means that the viewer first meets Cunanan's victims when they are dead, and then goes back into his relationship with them and reveals exactly who they were. This isn't conventional TV drama in the sense that empathy for a character is created and then the shock of their death at the hands of a madman is a tragic climax.

Instead, as in The People v. O.J. Simpson, Murphy is prodding and probing at the viewer's casual assumptions about what they are seeing. It's an unsettling but admirable approach. As Murphy has done before, he draws great performances from actors who might be considered lightweights. Actor and singer Criss, best known as the dreamboat Blaine Anderson on Glee, is remarkable as Cunanan, the preppie who has a deeply exaggerated self-importance and hides a murderer's heart under his smiling, happy-to-meet-you surface. There is also a fabulous, deeply poignant performance by Mike Farrell, forever associated with his role on the series M*A*S*H, as the rich and closeted gay Chicago real estate developer Lee Miglin.

Miglin was actually Cunanan's ideal lover – a rich older man who would finance the young man's extravagant tastes. But Miglin became yet another victim of the killer's rage and loathing of those more successful than him. Singer Ricky Martin, whose acting has so far been limited to a two-season sitcom and a soap opera, pulls off a powerful performance as Antonio D'Amico, Versace's long-time companion. Penelope Cruz plays Versace's sister, Donatella, as a steely protector of all things Versace after the assassination.

And one of the most important roles is given to Judith Light, who plays Lee Miglin's wife, Marilyn, a woman whose stony denial of her husband's sexuality, no matter what evidence is presented, is emblematic of an entire society's denial that a gay culture exists.

Murphy brought in Tom Rob Smith (who wrote London Spy) to adapt Maureen Orth's book, Vulgar Favors, about the Cunanan murders, for the series. The Versace family and company has complained, without seeing the series, that it distorts Gianni Versace's life. They say Orth's book is "full of gossip and speculation." Orth was at the TV critics tour to endorse the series and defended the accuracy of the book. "I would say my sourcing in the book is 95 per cent or more on the record, and I talked to over 400 people, and so, so many things that you might think were made up are definitely not made up. They happened."

Like The People v. O.J. Simpson and Feud: Bette and Joan, this new work from Murphy sets out not to revise history but to bring a fresh perspective to the recent past. In the case of the O.J. Simpson trial, Murphy's point was to lay bare the impact of tabloid-TV journalism on the American justice system and to put O.J. Simpson's status in the context of rampant racism in the Los Angeles police department. In Feud, he emphasized that great women actors are considered disposable and irrelevant at a certain age, both then – the 1960s – and now. Here, he's laying bare the agonies of the closeted, hidden life that so many gay men endured as recently as the 1990s.

"The first American Crime Story was very much a courtroom potboiler," Murphy says. "And we looked at sexism and racism. This second season is a manhunt thriller. We're not glamorizing the Cunanan story, and we never want to do that. We deal with everybody who was affected, not just the people who were killed, but also the relatives, the siblings. What he did was very, very destructive, and the reason why he did it, I think, was the homophobia of the day. It still persists and that is something really topical."

There are many striking scenes in The Assassination of Gianni Versace, some of them gorgeous and some troublingly sinister. But there is one scene that really lingers.

When Gianni Versace tells Donatella that he is going to admit publicly that he is gay, she is afraid the admission will kill the business, the brand. It didn't. This fierce, richly layered drama series is about the one malignant, vengeful force that did, in the end, kill Versace, the man. 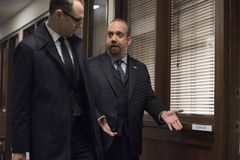 Crashing: A television series with powerful portraits of faith and humour
January 12, 2018 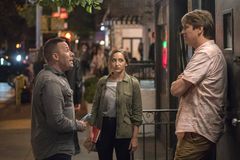 The Chi is a major new drama, Electric Dreams not so much
January 5, 2018 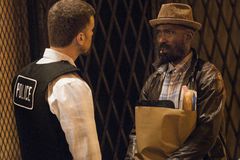