There are few things in the TV racket more enduring and daunting than Brit soap operas. In truth, they terrify me. I'm deeply afraid that if I start watching one of them, I'll end up spending half my day wondering about the outcome of Audrey's date with Nick, or if Sally has discovered that Dave did, in fact, spend the mortgage money at the bookies.

Take this: "Eve confronts Katie and apologizes for kissing Ryan. Lisa tries to persuade Sam to stay, while David is worried about the Olena scandal affecting his council career. Zak tells Olena to leave. Cain and Charity plan another car theft. Aaron meets Jackson for a drink at Bar West." What's that? That's a summary of an episode of Emmerdale. I'd make good guess that most of the alleged drama takes place, " 'round pub," as they say.

Two stalwart Brit soaps, EastEnders and Emmerdale, are now airing again in prime time on Canadian TV. Along with Coronation Street, they present a daunting triumvirate of tedium elevated to entertainment.

And yet, I think, the tedium is precisely what attracts a wide array of viewers, not just Brit ex-pats longing for a glimpse of home. Viewers can see themselves in these soaps. They don't see themselves so much on U.S. network TV shows. In that landscape, everybody is too darn rich and handsome, and nobody ever takes a drink unless it's to highlight the problem of alcoholism.

These shows are popular in Britain because, to some extent, a class divide still exists there. Their popularity in Canada suggests that a similar class divide exists here. In the United States, it is vitally important to believe that no class divide exists at all, even if it obviously does. The Brit soaps are wildly popular escapism only in places where people can describe themselves as working-class without hesitation. Thus, they go on and on.

EastEnders (Vision, weekdays, 9 p.m.) has been running for 25 years now and remains that quintessentially Brit phenomenon, the soap as vehicle for social realism. When it first began, it often offered a relentlessly bleak picture of urban life in Thatcher's Britain. In fact, it often seemed to exist in order to rebuke Thatcher's famous assertion, "And you know, there is no such thing as society." This show was about one portion of a very distinct society - working-class, inner-city Britons, and storylines about crime, unemployment, drug abuse and racism abounded. EastEnders was at first met with dismay from politicians in the U.K., who saw it as seedy and pessimistic.

I have no idea what's going on with the series these days. But I am informed that for some time, the show has been as gloomy as ever and the only lightness came when a certain Dawn Swann traipsed around in her underwear. The actress playing Dawn, one Kara Tointon, after being written out of the soap became the spokesperson/model for a lingerie line sold by the supermarket chain Asda. A supermarket chain, you'll note, not some designer label.

Emmerdale (Vision, weekdays, 9:30 p.m.) is notoriously baroque. I vaguely remember it being called Emmerdale Farm and being largely about farmers in Yorkshire and featuring arguments about cow manure, and such. Since then, it has become focused on life in the lively local village, where nefarious events unfold with astonishing regularity. Apparently there's been a plane crash, and violent local thuggishness. Earlier this year, I gather, Aaron Livesy's dog Clyde was attacked by local thug Mickey's dog and was later euthanatized.

Coronation Street (CBC, weekdays, 6:30 p.m.) is also lost to me. My father, however, is devoted to it. What he sees in Ireland is some months ahead of what we see in Canada and on more than one occasion I've been asked by viewers here to enquire what happens with some particular storyline. I've carried out the mission, not understanding a word. I haven't paid attention to Corrie since I was a kid, and Elsie Tanner and Ena Sharples were at the centre if things.

Far as I can tell, Corrie is more about soap-opera antics (British-style, of course) than social realism these days. But it's still rooted in ordinary working life in a small parcel of streets and, inevitably, 'round pub.

The upshot is that these soaps are improbably popular because they satisfy a need. The need is not an addiction to storylines with ever-twisting plot lines. It's a need to see something remotely like domestic squalor, common decency or mundane heartbreak presented as ordinary, not the occasion for hysteria.

Attention, Toronna: Your Vote: The Race for Mayor (CP 24, 8 p.m.) is, I'm told, a "final opportunity for Torontonians to express their opinions on what matters most." That means the mayoral election, the most gripping in years.

Candidates Rob Ford and George Smitherman are now locked in a dead heat in the polls, with the adorable Joe Pantalone in third place. With some candidates having dropped out recently, this is first big TV debate with just three candidates. It goes on for two hours, and the questions come from viewers.

Lessons of the Chilean rescue: This global village has some idiots
October 18, 2010 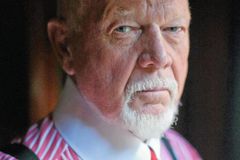