The old adage "history is written by the victorious" has never been less true. Today, history is read as a-linear and is thus written, re-written, challenged and validated, at breakneck speeds, victor be damned. History is as up for remixing as a dance track.

That does not mean, however, that the very real issues brought forth by historical investigation are in any way diminished. Arguably, this new fluidity makes what we learn from these narratives all the more loaded.

Deanna Bowen's fascinating multimedia exhibition The Paul Good Papers, a commissioned piece presented as part of the 25th anniversary of Toronto's Images Festival at Gallery 44, incorporates video, archival materials, performance (and performance documentation) as well as audio/sound sculpture to revivify, give new context(s) to and generally put under a wide magnifying glass an ugly, violent school-integration incident from the U.S. civil-rights era.

Without giving the whole show away, here are the basics: Paul Good was an ABC news reporter from the North who, in 1964, visited the small town of Notasulga, Ala., to witness a school integration. Good documented the brutal violence that accompanied the event and stayed on to interview key players, including Robert Shelton, the Ku Klux Klan's Imperial Wizard.

From this incident, via Good's work as well as other documents, Bowen has assembled a disturbing portrait of a terrible time.

Bowen's video installation takes the audio portion of one of Good's filmed reports from Notasulga (the audio is all that Bowen has found, to date, of Good's film) and creates a kind of sub-film to accompany the soundtrack – a series of scratched, lined, erased and occluded filmic textures that remind us of both what is missing from, and how much we project onto (especially when the screen is all but blank) historical records.

The archival material Bowen has collected – from photographs taken at the Notasulga riot, to an advertisement for a "whites only" rally, to Canadian newspaper accounts of the incident (including those in this paper), to a massive (arguably glamorizing) 10-page spread on the KKK printed in a 1965 edition of the U.S. "family magazine" Saturday Evening Post – tell how the mainstream media at the time expressed both righteous horror and also, subtextually, a resistance to embracing fully the complex issue of racism.

Adding another layer, Bowen and actor Russell Bennett have been re-enacting Good's interview with the KKK leader Shelton – daily, in front of a live audience and recording the performances. The physical dynamic between the actors, particularly as evidenced in the growing chain of performance photo stills on the gallery walls, is fascinating. The performance situation is casual, but the tension in Bowen and Bennett's uneasy bodies as they speak and respond to Shelton's contemptible ideology is palpable. Both performers appear to want to hide, or at least enclose their bodies within their hunched shoulders, and yet they cannot, because they are performing under stark lights in the middle of the gallery. But there's no hiding from the past.

A decade's worth of Forrestall's meticulous, tingling with life paintings, all in one place. Bring your reading glasses – Forrestall is a master of the hair-thin, airtight gesture.

Until May 9, 21 Morrow Ave., Toronto; cuttsgallery.com

If you took a hive of paper wasps, got them drunk on nectar, then gave them some sheets of metal and a Letraset kit to play with, the results might look like McDermott's energetic, jittery collages and smooth as cream wax-on-metal sculptures. 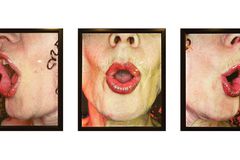 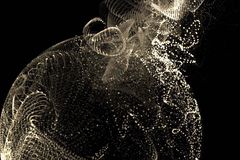 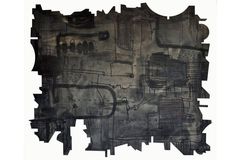 An exhibition that ponders the moon's malice, menace and magic
April 6, 2012 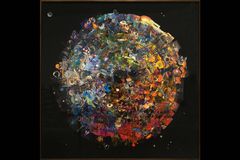 'If he didn't have the courage to witness...'
April 20, 2012
Follow us on Twitter @globearts Opens in a new window
Report an error Editorial code of conduct
Due to technical reasons, we have temporarily removed commenting from our articles. We hope to have this fixed soon. Thank you for your patience. If you are looking to give feedback on our new site, please send it along to feedback@globeandmail.com. If you want to write a letter to the editor, please forward to letters@globeandmail.com.
Comments