If you want the dish on Vogue fashion editor Anna Wintour, you'll get more from the Wikipedia entry than in the whole of R.J Cutler's documentary, The September Issue , a deferential, behind-the-scenes look at the legendary editor in the months leading up to the record-setting, 840-page September, 2007, issue of the fashion bible.

For all its ballyhoo'd full access to Vogue's inner workings, the movie's cinéma-vérité approach feels perilously close to advertorial.

There are repeated scenes of the gnomic Wintour being deferred to by designers, retailers and her staff, without offering much idea of what goes on behind her curtain of bangs, or what any of her critics think.

Still, The September Issue is entertaining advertorial, the cinematic equivalent of slipping into the magazine's perfumed pages. It's a crisply edited vision of an exotic world, full of angular models, beautiful and outlandish clothes, trips to Paris and Milan, and even some narrative suspense: Will they make the deadline on time? (Spoiler alert: They do.)

Wintour is, as you might expect, a very smart editor and not at all cuddly. The editor of Vogue for 20 years, with godlike powers over what designers and fashion trends are in and out, achieved cultural icon status since the publication of The Devil Wore Prada. The book by Wintour's former personal assistant, Lauren Weisberger, is a thinly disguised account of her unhappy year working for Wintour. The 2006 film of the book, starring Meryl Streep as the imperious editrix, earned more than $300-million (U.S.) at the box office, although Streep's performance seems to have been wildly fictionalized: Her character actually displays emotions.

Wintour, mockingly known as "nuclear Wintour," is guarded, behind the hair, shades, and often with her arms folded across her chest. She can also be catlike, curt, coquettish and funny, and always brusquely decisive, even when reversing her previous brusque decisions. A couple of times in the film, she decides to assume "candid" mode, which means staring wide-eyed at the camera with a half-smile while she talks self-deprecatingly about her role in her illustrious family: There's her father, a newspaper editor, a brother who helps the needy, another a political editor. She says they find her work "amusing" in a trivial way.

Director Cutler was one of the producers of The War Room , the 1993 film about Bill Clinton's successful presidential campaign by cinéma-vérité giants Chris Hegedus and D.A. Pennebaker, and he learned one good lesson in finding a smart, colourful character - James Carville - who wasn't yet famous.

The September Issue is cluttered with people - editors, designers, creative this and that's - with overlapping jobs. They spend a lot of time testifying to Wintour's power and foresight: She put celebrities on fashion magazines! She brought back fur! But what anyone except Wintour actually does at the magazine is vague. Even André Leon Talley, Vogue's inimitable, plus-size, gay, African-American editor-at-large, seems to exist mostly for comic relief.

Then along comes Grace Coddington, a former model from Wales, who started at the American version of Vogue the same day as Wintour.

Grace, the movie implies, is the genius behind what Vogue really sells, which is romantic aspirational fantasies for women. She wears unstructured black clothes, loose long red hair and scant makeup, and she has a moving back story. A young beauty who was herself a Vogue cover girl in the early sixties, she had her face rearranged in a car accident but took all she had learned and found herself drawn to the imaginative fantasies behind the trend-making role of fashion.

We watch as she builds her fantasies - a lavish Louis XIV scenario with a model with wedge-shaped hair and jewel-encrusted fingers, another based on languorous flappers from the 1920s. We see her work repeatedly sidelined or tossed out by Wintour. Then, at the end, when a Roman Holiday -themed shoot designed around cover-girl actress Sienna Miller doesn't work out as planned, Coddington's work is restored.

Throughout, her outrage, humour, warmth and subversive strategies make her the backdoor justification for the rest of the film, proof that this cold business of beauty also has a heart. 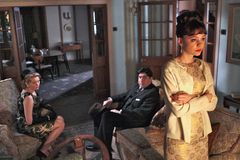 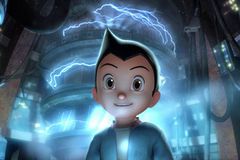 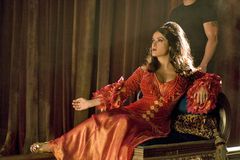 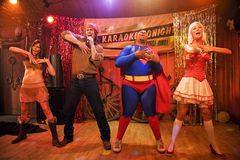