The well-travelled Australian playwright and screenwriter Andrew Bovell recently returned home from the film set of A Most Wanted Man, the John LeCarré war-on-terror thriller now shooting in Hamburg. Bovell adapted the literate thriller for the screen, a tricky job given the twists and turns of LeCarré's tale.

"His plots are incredibly convoluted, incredibly detailed, and of course a film can't go into that level of detail, so you must find a clearer way through the labyrinth but retain the complexity," he said in a phone interview from the farm where he lives near Adelaide, South Australia.

That's okay, because Bovell does complicated. His 1996 play Speaking in Tongues, an international hit now making a belated Canadian premiere at Canadian Stage, is proof enough of that. The play begins with two separate couples, each member contemplating cheating with the other's spouse, delivering the same clichés of their dawning adultery in echoing, repeating and some simultaneous dialogue.

"The [lines] are structured very carefully and very precisely, like a piece of music, and when it works it almost sounds like music," he said. "It has an energy and momentum and it can be a really stunning way to open a play before it settles back into more traditional storytelling form."

The play gives way to more conventional dialogue, but its plot revolves around secrets, lies and thriller-like coincidences that bring together two separate groups of characters. All nine roles are played by four actors. "I love playing with coincidence and time," Bovell said.

He also adapted his unusual script for the 2001 Australian film Lantana; he just cut the overlapping dialogue and stuck with the dark plot.

"When you step into cinema, you are moving to a much more accessible story form," he said, adding: " I wanted to find a new way of treating the material. I wanted to strip the film of all the theatrical artifice and conceits and simply tell a story an audience would find accessible."

Bovell, whose futuristic 2008 play When the Rain Stops Falling was performed at the Shaw Festival last year, used the success of Speaking in Tongues to launch a second career as a screenwriter (the Mel Gibson movie Edge of Darkness, among others).

Speaking in Tongues owes its odd structure to its start back in Sydney in 1996, where Bovell was commissioned by the Griffin Theatre Company to add a third piece to two unrelated short plays to create a single evening's entertainment.

"Rather than have three separate plays, I just had a glimpse at the possibility that these three could be connected in some way," he said. "The idea of unexpected connection has been a theme in a lot of my work. So, rather than three independent works, I found a way to bring all the characters into the same world."

As a young playwright, Bovell, now 49, thought he would address rather conventional stories – what is more commonplace than adultery, after all? – with an unconventional approach to language. The play reflects his interest in the ensemble rather the individual: "Actors find it challenging because they are being asked to sacrifice a certain degree of character nuance in order for the whole picture to work," he said of the simultaneous dialogue.

In film, he cities both Nashville and Short Cuts, two Robert Altman movies that follow about two dozen characters each, as an influence on his own approach: He prefers stories that deal with relationships in large groups that are sometimes brought together by sheer coincidence of time and place. In LeCarré's A Most Wanted Man, he not only navigates the unpredictable plot but sympathizes with an ensemble piece that takes a humanist approach to contemporary global politics.

"It's a film in which people solve the problems through their intelligence rather than through guns," Bovell says. "He's a humanist at heart; it's a call for reason and a call for the West to overcome its fear of Islam."

Meanwhile, back home, Bovell is working on a stage adaptation of The Secret River, Kate Grenville's 2005 historical novel about the colonizers' relationship with Australia's aboriginals. The Sydney Theatre Company production premieres in January.

"I try my hardest to keep a foot in both the theatre world and the film world," he said. "I try to do a play every three or four years. It keeps me very grounded to go back into a rehearsal hall with a group of actors. I love the whole notion that you rediscover the play every night with a new audience."

Sixteen years after Speaking in Tongues made its Sydney debut , the rediscovery continues. 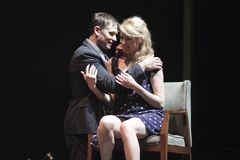