Fresh off his critically acclaimed turn as Sherlock Holmes in The Hound of the Baskervilles at the Shaw Festival this past season, Damien Atkins is still sleuthing. He brings his UFO-exploring one-hander We Are Not Alone to Toronto’s Streetcar Crowsnest, where questions on crop circles, strange sightings and otherworldly visitations are to be pondered. The Globe and Mail’s Q&A encounter of the Atkins kind involved Benedict Cumberbatch comparisons, flying saucers and the Dora-winning actor-playwright’s aversion to reading reviews of his own works and performances.

In The Globe’s favourable review of the recent Shaw production of The Hound of the Baskervilles, our theatre critic described you as Canada’s answer to Benedict Cumberbatch. What’s your reaction to that?

You remind me more of another British actor, Damian Lewis.

I hear that a lot too, actually. You know, a friend of mine who went to theatre school with Benedict Cumberbatch says he’s a really nice guy. I’ve always enjoyed his acting. So, as far as the comparison, sure, bring it.

At the start of We Are Not Alone, you talk about the reaction you received when you told people you were thinking about writing a play about UFOs. That you were met with awkward silence, followed by a little laugh. Is that true?

Yes. It was an actual conversation I had, and it was a surprise to me. The conversation itself became fuel for the project, though, because I realized that it was a subject about which people had extreme preconceptions and extreme prejudice. And that to me is an interesting thing as a dramatist to look into. Also, I felt instantly protective of people who had tried to express or divulge some kind of contact with extraterrestrial beings, because they are so often derided. I thought, “Is that fair? Is that a fair thing to do to people who are making true confessions?” So, in effect, the kind of attitudes and prejudices that I encountered at the beginning was part of the reason that I continued with the project. I wanted to poke those attitudes.

Why are people who believe in extraterrestrials so passionate about it?

I think the consequences of acknowledging that there is the existence of extraterrestrial life in the universe are so huge that it does become a kind of core-value decision that people seem to have to make. You know, most scientists will say to you that there is intelligent life other than our own in the universe. That’s not the subject of much debate. The question of whether or not we’re being visited is, of course, another issue.

Regardless of what scientists think or what evidence is out there, some people just want to believe we’re not alone. They need it to be true. Why is that?

Carl Jung wrote a book about flying saucers. His conclusion was that they are both real and not real. He said they could be an expression of human beings’ desire to have a miraculous event, with the shape of the event coming in the form of whatever forms miracles take in that age. And that human beings have a desire to have a transcendent god experience that manifests itself in interesting and different ways. But, it’s all reductive, right?

So, the belief in UFOs and intelligent life outside of Earth is the thinking man’s religion?

Yes, but I find that a bit reductive too. I don’t actually think that it’s as big a deal as we think it is. There are thinkers and scientists and sociologists who say that if aliens landed here, the world wouldn’t change as much as we think it would. I kind of agree with that. People cope.

Is We Are Not Alone just about UFOs, or is the subject matter a jumping-off point for other discussions?

Without giving too much away, the play is an account of the evolution of my investigation. I will say that my investigation did take on larger dimensions, both cosmic and personal.

The play became about getting older and maturing. Part of the maturing is grappling with the desire to distinguish yourself. And evaluating whether you’ve distinguished yourself. That was happening to me in my late 30s as I was researching and writing this play. Have I done anything exceptional? Am I special? The older I get, I think I’d rather be a grain of sand. I don’t know if that’s what everyone goes through. But I came to a realization that I’d spent my entire life trying to distinguish myself.

Only to have a critic call you Canada’s Benedict Cumberbatch. That’s rough.

That’s the whole point, though! It really is. And that’s why I don’t read reviews. Even the good ones are not good enough, and the bad ones you remember forever. You’re either starving or feeding the ego. And I think the ego is a disaster. Instead of looking outward, you’re looking inward. It feels to me that the concerns of the ego are something to be resisted.

We Are Not Alone runs Jan. 7 to 26, at Streetcar Crowsnest’s Scotiabank Community Studio.

The Band’s Visit’s Sasson Gabay - the star of a quieter Come from Away on Broadway
Subscriber content
January 1, 2019 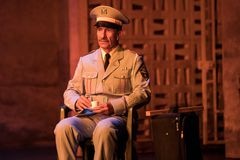 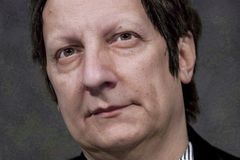 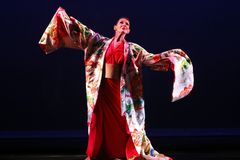