You could feel the New York Times review rippling across the room filled with artists, investors and Newfoundland visitors at Come From Away's opening night party, held in a ballroom under the glass-domed roof of the neo-classical Gotham Hall on Broadway Sunday night.

It was shortly after 10 p.m. and I was sitting at a table chatting with a pair of male ushers from the Schoenfeld Theatre, the 1,080-seat playhouse where Irene Sankoff and David Hein's musical is playing on West 45th Street.

Ushers always know what's really going on at a theatre production – and, in between sips of screech rum cocktails, they told me about preview audiences' enthusiasm for the Canadian musical – and their own for the upcoming visit by the Prime Minster of Canada, the "very hot" Justin Trudeau.

That's when another usher rushed over with a phone held aloft like a torch. "It's a rave from [Times critic Ben] Brantley," he said. "Critic's pick."

With the benediction of Brantley, Come From Away increases its chances both of finding financial success and being considered a serious contender for best musical of the year at the Tony Awards in June in an unusually crowded Broadway season.

More than two dozen critics cover New York's famed commercial theatre district on a regular basis – but the Times continues to be viewed as the most important influencer of theatregoers and Tony voters.

Like most of the reviews that came out on Sunday, Brantley's acknowledged that Sankoff and Hein's musical about Newfoundlanders opening their doors to strangers stranded on their doorstep after 9/11 had acquired a strong resonance given U.S. President Donald Trump's more fearful approach to displaced people seeking shelter – such as his executive order temporarily suspending the U.S. refugee program.

"In recent months, some Americans have spoken wistfully (and unrealistically) of moving to Canada, where people are kinder, gentler, more accepting of others," Brantley wrote. "Come From Away allows you to make that move for an eventful 100 minutes."

This was a theme echoed in many reviews by critics – who were as enthusiastic about Canada's Prime Minister as the show. "One has only to read about terrified immigrants, fleeing across the United States's northern border in search of sanctuary, or to reflect on Canada's vigorous and civilized prime minister, Justin Trudeau, to become sentimental about a place where generosity still seems to be a growth industry," wrote Peter Marks, the critic for the Washington Post, in his rave. "Sankoff and Hein's portrait of Gander will only intensify that longing."

Marks, who felt the show had improved from an earlier stop in Washington, called Come From Away "an antidote for what ails the American soul" and remarked that "the Tony race for best musical of the year just got interesting."

There were many other positive reviews, but a few critics raised a more skeptical eyebrow at the overwhelmingly positive depiction of Canada – or, at least, Gander, Newfoundland.

Chris Jones, the respected critic for the Chicago Tribune, wrote of the "breathless, intermissionless bonhomie" of the musical – which he said "functions as a shrewdly timed commercial for Canada's growing brand as the most welcoming North American host for international refugees."

But while Jones was clearly not won over by Come From Away, he did feel the reactions of spectators around him worthy of remark: "For the record, [Come From Away] was received with atypical warmth and affection on the night I saw the show. Truly atypical."

(Critics such as Jones and Marks, from major cities outside New York, can be important to a show's success on Broadway as well – as 70 per cent of tickets sold in the commercial theatre district go to out-of-towners.)

New York magazine critic Jesse Green delivered the harshest review that appeared Sunday night – finding the show sentimental and smug. "[Come From Away] is by no means the best musical on Broadway, but it's surely the goodest," the reviewer wrote. "If that sounds cynical, perhaps New Yorkers may be permitted a bit of side-eye about a work that borrows our local tragedy as background for 100 minutes of Canadian civic boosterism."

This was, of course, the reaction that producers feared for the musical in Manhattan, where the tragedy of 9/11 hit hardest – but even Green, the most vociferous of the detractors, added that the show was a "possible feel-good hit."

When the reviews are bad, Broadway opening parties can empty out quickly – but at Gotham Hall, one of Hein's favourite Newfoundland bands, Shanneyganock, flown in as a surprise by the producers, played for hours and Appleton, Nfld., Mayor Derm Flynn, who inspired a character in the show and was in New York for the opening, conducted a surprise "screeching in" ceremony by the bar for some of the designers on the show. (I have no idea where he got the giant cod.)

In between sets by the band, I talked to Hein and Sankoff, who are a married couple, about the reviews. "One of our producers came up to me and said, 'Do you know what a critic's pick is?'" Hein said. "And I said, 'No, I'm from Canada.'" For anyone else who does not know: The New York Times doesn't assign star ratings – so a "critic's pick" is the best you can get.

That Come From Away is well timed to current events is, of course, a fluke: Sankoff and Hein began work on the show with the help of a Canada Council grant received in 2011 – and the musical had its world premiere in May of 2015, a full five months before the Liberals were elected to a majority federal government and Trudeau became prime minister.

"There's never a bad time to tell a story about human kindness – whether Stephen Harper's in power, or Justin Trudeau's in power, it's still important to focus on people who are helping," Hein said. "I hope it resonates and supports the work that we're doing with welcoming refugees. … We're really proud that [Trudeau]'s coming down here. It means a lot."

The party continued and did not shut down early. 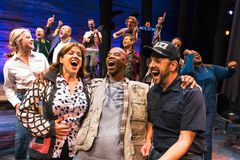 Drabinsky’s Sousatzka return is less a comeback than his chance to prove himself, again
March 12, 2017
Michael J. Fox 'humbled' to receive Canadian honour of Governor-General's award
March 9, 2017
Follow J. Kelly Nestruck on Twitter @nestruck
Report an error Editorial code of conduct
Due to technical reasons, we have temporarily removed commenting from our articles. We hope to have this fixed soon. Thank you for your patience. If you are looking to give feedback on our new site, please send it along to feedback@globeandmail.com. If you want to write a letter to the editor, please forward to letters@globeandmail.com.
Comments