Traditionally, conflict has been seen as an essential element for drama – but reconciliation is proving an equally fruitful area of exploration for the stage.

Evalyn Parry, a singer-songwriter and the artistic director of Buddies in Bad Times, and Laakkuluk Williamson Bathory, a storyteller and dancer who has performed with Tanya Tagaq, met as artists-in-residence on a ship filled with climate-change scientists travelling up the Davis Strait from Nunavut to Greenland in 2012.

For Torontonian Parry, the trip was the realization of a dream of her father, a folk singer who died when she was 22. He sang Stan Rogers's Northwest Passage as a regular part of his repertoire – and held romantic ideas of the North, though he never travelled further in that direction than Winnipeg.

For Bathory, a resident of Iqaluit, the trip felt like being on a cruise full of tourists – and part of a long history of voyagers to her part of the world not interested enough in the people who live there.

Parry's Arctic journey was a chance for her to consider her own complicity in this on-going colonialism – the way Rogers's song with its refrain about "a land so wild and savage," which she still knows by heart, has made a groove in her mind. She recalls canvassing for Greenpeace in her youth and watching the coming-out episode of Ellen at a gay bar in Montreal; for Bathory, however, Greenpeace is still the organization that caused much pain for her community due to its campaign against the seal hunt (which it first apologized for in 1985) – while Ellen DeGeneres's connections to anti-fur group PETA make her less a hero than a villain.

As Parry and Bathory talk and sing to each other and the audience, they explore the straits between them and the points of connection. It's a charming conversation and concert where Parry loops her guitar and Bathory layers in throat singing, and the two are accompanied by the Cree-Mennonite cellist Cris Derksen.

My worry at the halfway point of the show, however, was that this was essentially a Parry production featuring Bathory – a confessional/political folk musical similar to Parry's memorable 2011 show Spin with Inuit sounds placed on top.

But then Kiinalik shifts form. Bathory takes over, telling stories about the history of tattoos in her culture – which Christian missionaries had stamped out among Inuit more than 100 years ago, but have recently returned – and whispering a monologue about waking up in the middle of the night with a loop in her head about blame and guilt.

Then, the form shifts again – radically. Bathory removes her sealskin shoes, applies black and red makeup to her face and stuffs little balls into her mouth. She transforms herself into a strange, confrontational and sexual creature who climbs through the audience, getting up-close and personal with individual spectators.

I only learned afterward – through Bathory's explanation – that this is uaajeerneq, Greenlandic mask dance, and its purpose is in part to help people quell their fears when something scary is staring them in the face. The practice breaks a number of taboos in Toronto theatre culture – from the use of face-blackening makeup to the lack of explicit consent for audience participation. It was dangerous, the way some of the most memorable performance art I've seen at Buddies always has been; it was captivating and felt like the reverse of colonialism.

Director Erin Brubacher pulls the disparate styles and movements of Kiinalik together without even forcing it into something it's not. The set design by Kaitlin Hickey is as crisp and clear as Arctic air – and features a wall of ice that melts over the course of the show. This is a visual reminder of climate change – even as the water becomes useful, for instance, to remove Bathory's makeup.

In addition to being a collaboration between Parry and Bathory, Kiinalik is a co-production between Buddies in Bad Times and its cross-town cousin Theatre Passe Muraille – another example of how working together rather than in conflict can lead to the best theatre. 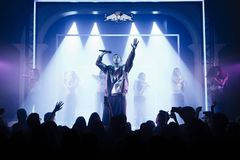