Back in 2008, the Canadian circus conglomerate – known for its animal-free thrills and aesthetic –was enjoying a completely charmed existence and unprecedented financial success in the performing arts.

With its 25th anniversary looming, the Montreal-based company had an almost perfect batting average with audiences: None of its tours had ever stopped touring; none of its expensive extravaganzas housed in Las Vegas casinos had ever closed.

Flash forward five years and – as it announces the layoffs of 400 employees – Cirque has taken a serious hit to its artistic reputation along with its profits. Founded by stilt-walker turned space tourist Guy Laliberté, it has been brought down to earth and become a hit-or-miss company.

Worse, Cirque has become the kind of organization that would produce a mediocrity like Banana Shpeel – and keep trying to foist it on its fans even when it was clear it wasn't working.

Banana Shpeel, which disappointed audiences in Chicago, New York and Toronto in 2009 and 2010, is the perfect example of growth gone wrong.

The show was an attempt to create a new of kind of Cirque entertainment that could tour to standard proscenium theatres rather than under its own big top – and you could tell the project was born out of desire for a new revenue stream rather than from any artistic impulse.

Mime David Shiner, best known for his wordless hit Fool Moon, was, for some reason, brought in to write and direct what would be Cirque's first show with dialogue. A Broadway composer and a couple of triple threats were hired – then thrown out in the show's out-of-town tryout in Chicago.

What then opened in New York at the Beacon Theatre was like a bad live adaption of The Muppet Show punctuated by circus acts. "This place is infested with clowns!" shouted the main character, Schmelky – and, indeed, it was.

The Times called Banana Shpeel "one of the most frustrating failures in Cirque's history" – but, instead of letting it die there, Cirque du Soleil decided to send it out on tour regardless. That was probably the cockiest move on the company's part – taking its audience for granted – though the reception in Toronto finally convinced them to euthanize the show.

Cirque du Soleil was founded in 1984 by Laliberté – now, of course, the world's first billionaire stilt walker – and in the first 25 years of its life it opened an average of one new show a year, sending out a new touring show or further colonizing the Las Vegas strip.

Cirque's best shows presented death-defying stunts in a razzle-dazzle environment, but still had room for clowns who contemplated their own mortality. The Simpsons famously parodied the unique company as Cirque du Purée – showing a clown crying: "I can't get the lid off my jar of rainbows!"

Cirque's colourful, gibberish-filled aesthetic is dismissed as pretentious by many critics – they always hate the clowns – but audiences have always been on board. Like Quebec culture in general, it is a mix of European and American influences – accessible, earnest, yet undeniably artful.

In 2001, Daniel Lamarre, who had previously run the private television network TVA, came on board as CEO. Lamarre told Bloomberg around that time that he wanted to expand the half-a-billion dollar company at a rate of 25 per cent a year.

Some observers might locate the beginning of Cirque's fall at that moment, but for me it came around 2008, when the company decided to triple its output to three new shows a year. It aimed to create permanent shows in new markets: New York and Los Angeles, and, further abroad, in Tokyo and Macau. And it tried to create new kinds of shows – magic, variety, musical. "If we succeed in creating new categories of show, content diversification, then there is no limit," Lamarre told me at the time.

Attempting new kinds of shows in new markets during a worldwide recession – well, it's no surprise this circus trick didn't land. The attempted Asian expansion– Zed at Tokyo Disney; Zaia in Macau – failed. Viva Elvis, opened in 2010, was the first Las Vegas show to close; it has been replaced by Zarkana, originally envisaged as a seasonal show in New York. Iris, the gorgeous movie-themed show Cirque planned to run in Hollywood for a decade, just closed its doors after a year and a half.

Meanwhile, the company's bread and butter – those roving big-top shows – are doing better than ever, while Michael Jackson: The Immortal World Tour is a genuine juggernaut and potential prototype for a slower, wiser expansion. This week, Cirque du Soleil may have had its first big fall – but at least they have a big safety net underneath. 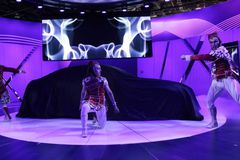 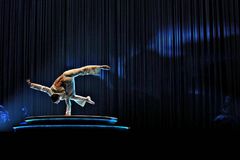