The premise was full of promise: one of Toronto's hottest R&B duos, Majid Jordan, performing at the Great Hall with a group of classically trained dancers. It seemed like an exciting moment to put contemporary dance in conversation with the millennial mainstream, and as the duo took the stage on Thursday night, the energy in the building was electric. While aspects of the choreography turned out to be at odds with my expectations – aspects that I'll get to – the story of how they came to be bears telling first.

The artist behind the dancing is no choreographic veteran, but the National Ballet of Canada's youngest company member, 19-year-old Siphesihle November. As one of five new recruits to the corps de ballet, November is in the midst of a frenetic autumn. He's just returned from Paris, where the company performed John Neumeier's Nijinsky, and is currently rehearsing for next month's opening of The Winter's Tale. This might be a busy enough schedule for the average novice, but November has managed to pair his first season as a salary-earning dancer with his professional choreographic debut.

The performance with the R&B duo is part of the 3 Days in Toronto mini-festival, created and sponsored by Red Bull Sound Select (yes, that's the Red Bull of energy-drink fame). It's a collaboration that came about through a fortuitous network of Toronto artists. Majid Jordan – which consists of Majid al Maskati and Jordan Ullman – met as University of Toronto undergraduates in 2011 and were signed by Drake to his OVO label soon after. For their second album, The Space Between, they wanted to shoot a video with a choreographer, and weren't fazed when their creative director suggested a recent graduate of Canada's National Ballet School, whose experience didn't extend further than the workshops he'd done in class.

"Siphe's energy is great," al Maskati says. "We loved the choreography he came up with, it really added an element to our video that we hadn't had before. We were struck by how much he knew, how knowledgeable he was."

"Majid and I are always looking for younger people who have that drive and motivation to make it happen," Ullman says. "Siphe – he's young, but when you talk to him, he knows what he's doing and he knows how to accomplish it with other people."

It's not the first time November has leapt at an unexpected opportunity. Born in Zolani, an impoverished township east of Cape Town, in 1998, he began dancing with his older brothers when he was a kid. They created a troupe that danced kwaito, a form of South African hip hop that uses speedy, intricate footwork. (Beyoncé showcases kwaito dancers in her video for the single Girls). A local dance teacher took note of November's exceptional talent and made him a deal: His troupe could perform in her recitals if he was willing to train with her more seriously, which included learning ballet.

At first, November hated the rigour and structure of classical technique. "It was such foreign movement – I didn't know what to think of it," he tells me. "Then seeing some performances, seeing the Cape Town City Ballet, it became something that I wanted to do." A few years later, fate came knocking in the form of a Canadian couple on sabbatical who thought that November might be a great candidate for a scholarship to the National Ballet School. They were right, and November moved to Toronto to attend the school in 2010, at the age of 11.

"Ballet became part of my life, really," he says. "It was something that I had to do at this point because I didn't want to go back to South Africa, back to the same old system that no one really makes it out of. Ballet trapped me in, but I also had to learn to love it more and more, because of the opportunities it came with."

I've written a lot in The Globe and Mail about ballet's need to restore its relevance, and diversity in classical companies is a related issue; November is the National's first black male dancer in many years. Expensive tickets, traditional venues and plot-driven adaptations of Shakespeare and fairy tales have also made ballet feel out of touch with global, millennial tastes. So I expected it to be refreshing to see his six-dancer, all-female group bridging the gap between street-style and high art while drawing, conspicuously, on their classical training. Three of the dancers are November's friends from the National Ballet School; the youngest, Emily Skubic, is currently in Grade 11.

November agrees that ballet is changing, and that the change is crucial. "I think it's becoming more accessible, more relatable. I think we're bringing out more of the humanity of dance, which is where it stems from. There are only so many steps you can do in ballet," he says and suggests that, therefore, the power has to come from somewhere else. "The music, the way the dancer moves – it does something to you."

For him, the issues of elitism and global perspectives are especially pertinent. "Ballet used to be such a class divider. But now, for a kid from the ghettos in South Africa, in order for him to want to be a dancer, he just needs to see someone like me. Those stories, from that particular township, can then influence ballet in a pretty cool way. And that makes ballet evolve, too – so we're not telling the same stories over and over again."

With all this in mind, I was disappointed to see the choreography play into so many misogynist clichés. Majid Jordan, both fully clothed, were joined on stage by six scantily-dressed young women who squatted and gyrated like strippers. I wonder what happened here – how much November felt obliged to play into music-video tropes and literalize the lyrics (which included Baby don't speak, let your body talk) versus how much he was executing his own creative agency. I hope his future work changes focus. I enjoyed interviewing him; he's eloquent and clearly multitalented.

3 Days in Toronto mini-festival continues with BADBADNOTGOOD at Massey Hall on Oct. 20 and MC Tory Lanez at the Phoenix on Oct. 21 (redbullsoundselect.com/2017/toronto). 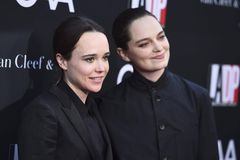 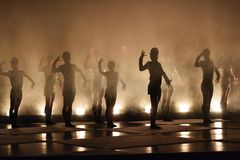 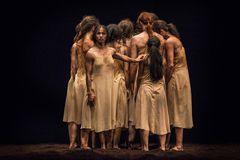