"I was kind of scared out of my mind."

The successful film and television actor Kim Coates is talking about his return to the stage, after more than a quarter-century off the boards. The former Sons of Anarchy star is set to play an aging eccentric, Johnny (Rooster) Byron, in an Outside the March and A Company Theatre co-production of Jez Butterworth's 2009 transatlantic hit play Jerusalem in Toronto. The role is a demanding one – Coates has journeyed to England and worked with a dialect coach to help nail the tricky Wiltshire accent required – and initially the 59-year-old wondered if he'd bitten off more than he could chew.

Mind you, the Saskatoon native was the youngest actor ever to play Macbeth at the Stratford Festival and his filmography is impressive. He can chew just fine, thank you. Still, after he accepted the lead in Jerusalem, he contacted Mark Rylance, the great English actor who originated the Byron role in the West End.

Sitting in a small dressing room with fellow Canadian actor Nicholas Campbell during a break from a script reading, Coates says he was "beyond blown away" that Rylance would take the time to meet with him. "He's his generation's Brando on stage," says Coates, working on a Diet Coke and chicken salad.

When Coates told him how intimidated he was by the role, Rylance talked him off the ledge, telling Coates that during the five-month break between Jerusalem's West End and Broadway productions, he didn't sleep one night.

"I'm sure he did sleep," Coates says, "but what he was doing was allowing me to have that excitement and trepidation, and to use it. He passed the baton beautifully to me, and it was a conversation I'll never forget."

And how is Coates himself sleeping? "Really good, now," he says quickly, turning back to his salad.

"You should be," says Campbell, navigating his own takeout sushi situation.

"Have you read the play?" Coates asks me. I have not.

Being with Coates and Campbell is, as one might imagine, a kick. Watching them together, it's clear Coates adores Campbell, who he treats with giddiness, gentleness and playful embraces.

"I have huge affection for really good actors," Coates says, explaining his fandom of Campbell, six years his elder. "If you happen to be a good person on top of that, then you really have my attention. Then, if you've been through some stuff and have come out the other side and you're still doing great things, then you've really, really got my attention. That's who Nicky is to me. I know his heart. He's the real deal. So, yeah, man, it's easy to hug him."

Coates's character in Jerusalem is a tattooed former daredevil who lives in the woods in a camper, where he acts as a sort of modern-day Pied Piper to the troubled youth who come to hear his epic tales and drink his booze.

On the subject of giving advice to young actors, Coates (an intense-looking dude, all soul patch and nuclear-blue eyes) speaks with guru-worthy charisma and convincingness. "All I've said is 'don't be afraid to fail. Expand your universe.'"

Asked about aging, Campbell (paunchy, with a shock of white hair) admits that after having a stroke a few years ago and putting on "a few pounds," his roles are getting narrower and the parts smaller. For Jerusalem, he's the scene-stealing Professor, a whimsical charmer.

"The public sees me as an old guy," he says, with no self-pity. "They ask me if I'm still acting."

"Nick's a legend," Coates says, turning to me, ending the exchange. "I'm a young legend wannabe."

Coates (who says he has a "big house" in Los Angeles and a "couple of places" in Canada) has worked with Campbell before, on the Canadian hockey film Goon and the eighties television series Diamonds. He says he loves being in Canada compared with the "harsh realism" of the United States.

The production of Jerusalem is being described as "immersive."

Audience members will be invited to squat with Rooster Byron in the forest, and apparently a British bartender sells beer before the show. But Coates wants everyone to know that the play is nothing other than potent.

"Once the play starts, stand back," he says.

"No, really, everyone stand back," Coates continues. "Because it's going to be on."

Jerusalem is on stage at Toronto's Streetcar Crowsnest, Feb. 15 to March 10, with previews Feb. 13 and 14. (crowstheatre.com). 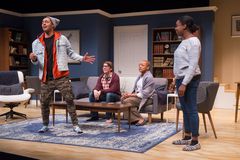 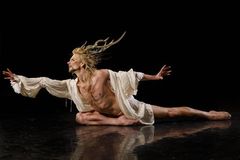 Between the Acts: Toronto playwright Kat Sandler on the advantages of wearing two creative hats
January 23, 2018 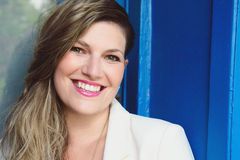