What I wish most for theatregoers is to stop after reading this sentence and simply go see Daniel MacIvor’s New Magic Valley Fun Town at the Tarragon Theatre.

I walked in with few expectations, thinking the play was going to be one of the Nova Scotian playwright’s lighter romps of recent years – and was surprised at every turn by how the early broad funny moments led to still and poignant ones, how the initially comic characters deepened and deepened, and how the tears that rolled down my cheeks from laughing, hard, were followed by emotional ones earned by this moving portrait of difficult, traumatized humans trying to live and love as best they can.

New Magic Valley Fun Town is set in a trailer in Cape Breton where Dougie (MacIvor himself) is getting ready for a party – and, in an opening feat of physical comedy, we watch him enter from the car with a very Canadian lazy man’s load of groceries.

He carries five giant bags of junk food from No Frills, a six-pack of Keith’s balanced on top of a two-four of Molson Canadian, and a half-empty Tim Horton’s coffee dangling by a finger.

The cause for celebration is that Dougie’s childhood friend Allen (Andrew Moodie), now a university professor, is coming back to Cape Breton for a rare visit after 30 years away living in Toronto.

Dougie’s estranged wife, Cheryl (Caroline Gillis), back in his life since his cancer diagnosis, and their depressed daughter, Sandy (Stephanie MacDonald), on a “break” from her thesis, are the two other guests.

When Sandy, after looking up Allen on Facebook, discovers that her white father’s old friend is black and is appalled to realize that’s why he was nicknamed “Charky”, everything seems set up for a classic dinner-party play, where race and class and regional differences are set to emerge entertainingly over Cheryl’s bacon-stuffed mac and cheese and swigs of cheap beer.

But after Allen does show up, New Magic Valley Fun Town goes in unexpected directions, delicately. What ends up emerging as the focal point of the play is something that strongly connects Dougie and Allen rather than divides them.

I won’t reveal what it is, but, unlike so many (largely American) dinner-party plays, there’s nothing artificial about how tension is ratcheted up, no plate-smashing climax, no affection about The Important Issues of Today. Instead, MacIvor packs a lot of unpretentious power into a mere 90 minutes – with a final quiet scene between Dougie and his unconventional family that is cathartic perfection.

Director Richard Rose’s world-premiere production, which has arrived in Toronto after a run at Prairie Theatre Exchange in Winnipeg, shifts about cannily. The standout discovery for Torontonians is Stephanie MacDonald, a Halifax-based actor who gives a brilliant Chekhovian performance here, living and breathing each tragicomic moment.

It is a joy to see MacIvor and his long-time muse Gillis on stage together as husband and wife, caring and acrimonious, while Moodie’s restrained performance provides a welcome contrast.

It’s still a bit of a surprise to walk in to a MacIvor play and find a realistic living room and kitchen. Since he emerged in the late 1980s, the Siminovitch Prize-winning playwright’s reputation has been built on dark, dream-like solo shows and dramas metatheatrical (Never Swim Alone) or minimalistic (A Beautiful View).

It was only in 2006 with How It Works that MacIvor wrote a play that had a door in it – and, in the decade since, he has been trying his hand at a conventional 20th-century play structure.

You might compare MacIvor’s trajectory to that of the American great Eugene O’Neill, whose early expressionistic and experimental works are cherished by his biggest fans, but whose family drama Long Day’s Journey Into Night is the show that continues to be produced almost constantly.

Will New Magic Valley Fun Town be that play for MacIvor? It has the same number of words and syllables in its title – but to call it MacIvor’s masterpiece is premature. Though he’s been a major Canadian voice for decades, he is only 56. For now, I wish only that both the audiences who have followed MacIvor and those who have never heard of him to see this play and marvel at a voice maturing into a new form of greatness.

Actor-playwright Daniel MacIvor on his connection to Spalding Gray
November 24, 2016 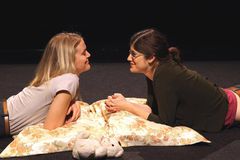 Daniel MacIvor, the distracted reader
September 30, 2011
Follow J. Kelly Nestruck on Twitter @nestruck
Report an error Editorial code of conduct
Due to technical reasons, we have temporarily removed commenting from our articles. We hope to have this fixed soon. Thank you for your patience. If you are looking to give feedback on our new site, please send it along to feedback@globeandmail.com. If you want to write a letter to the editor, please forward to letters@globeandmail.com.
Comments