It was commonplace, for a long time, for Canadian theatre artists and critics to assert that Anton Chekhov was one of ours – that there’s something about the cold climate, the melancholy, the strange sense of humour in his plays that rang particularly true to those living north of the 49th parallel.

Playwrights such as David French and John Murrell first gave Chekhov a Canadian voice in the 1970s, while, more recently, the likes of Jason Sherman and Peter Hinton explicitly transposed his plays to Muskoka cottage country or the Niagara region.

But, within that discourse that I myself have participated in, there’s been a problematic subtext: To say that Chekhov’s plays are “Canadian” has often really meant “white Canadian,” and staging them as such has often been an unconscious erasure of our country’s multiculturalism (and Indigenous peoples).

The Orchard (After Chekhov), now at the Shaw Festival (and next season at the Arts Club in Vancouver), is a notable new attempt to make Chekhov truly reflect Canada, giving us the first major adaptation that is not white either by default or design – and that really grapples with race, not just class, and with what losing land might mean in our own context.

Sarena Parmar is the playwright – and she’s resettled The Cherry Orchard to 1975 and an orchard in the Okanagan Valley owned by a Punjabi-Canadian family called the Basrans. This is no whimsical decision: Parmar herself grew up on a family-owned fruit orchard in British Columbia and writes with agricultural authenticity about the sight of the sun setting over fruit trees or the smell of soil at different times of day. (This is the first version of this play I’ve seen where the orchard seemed more than a symbol.)

The Orchard begins, as Chekhov’s does, with a matriarch returning after five years abroad to the family estate she’s neglected – to discover that it is about to be sold at auction to pay off debts.

Loveleen (Pamela Sinha) has been in India, mourning the drowning death of her young son, where she fell in with a man who used her for her money – and then left her for a younger woman and on the brink of suicide.

Her daughters Annie (Parmar) and Barminder (a quietly excellent Krystal Kiran) have been running the orchard in the meantime with their eccentric uncle Gurjit (Sanjay Talwar), who is prone to rambling speeches about bookcases.

Michael Lopakhin (the very fine Jeff Meadows), a white businessman who grew up poor and the son of a picker, has a plan to save the Basrans’ orchard despite a provincial land freeze: Sell off plots to create an “agricultural” RV park. But Loveleen’s indecision and refusal to face reality leads to a less happy conclusion.

As much as Parmar’s play follows the structure and plot of Chekhov quite closely, the story resonates in entirely different ways. For one thing, the Basrans – a visible-minority family in 1970s B.C. losing their business – are immediately much more sympathetic protagonists than out-of-touch Russian aristocrats.

Loveleen is simply heartbreaking, especially in Sinha’s deeply mournful performance; she’s clearly still stuck in the trauma caused by her son’s death, not selfish or willfully ignorant, as her inspiration, Ranyevskaya, is often portrayed.

Likewise, Talwar’s lovely, lost Gayev is not living a life of leisure he can’t afford: He’s a Sikh man who’s been unable to land a job off the orchard because of his uncut hair and turban and so has retreated into fantasy.

The dull old debate over The Cherry Orchard is whether it is a comedy or a tragedy – but, here, a tragic tone dominates the Basrans.

The original tone manifests itself more clearly in the ancillary characters. Two Japanese-Canadian characters, Yebi (Kelly Wong) and Donna (Rong Fu), are funny misfits, but also carry the weight here of having been interned in their youth. A cowgirl named Charlie, a former trick rider on the “Indian Cowboy” circuit and residential-school escapee, is beautifully embodied by Jani Lauzon.

Director Ravi Jain’s production, in the round in the Shaw’s small Studio Theatre, starts off cluttered, but eventually comes into focus. The Orchard can feel like a square peg being shoved into a round hole, certainly – and Parmar’s writing is at its best when it directly grapples with the Multiculturalism Act and Pierre Trudeau or subtly examines issues such as assimilation or white privilege.

It brilliantly takes its own path at the very end – when grandpa Kesur (a wonderful David Adams) seems to be left behind. That was satisfying – and made me, retrospectively, wish for a looser adaptation, a new play. But this is the unchanged struggle in Canadian theatre – too few companies with the resources and willingness to produce a 13-character script unless based on a “classic.”

The Orchard runs till Sept. 1 (shawfest.com). 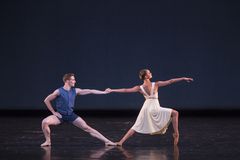 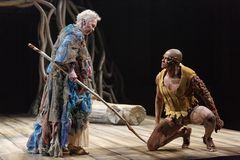 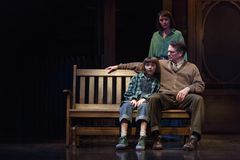