Rating for Much Ado About Nothing:

Canadian Stage’s Shakespeare in High Park may be a popular summer activity for families in Toronto, but it’s kind of one of the city’s best-kept artistic secrets, too.

The ensembles at the Stratford Festival and the Shaw Festival get most of the praise this time of year, but you’ll often find the same caliber of actors - and sometimes even the exact same actors - at these outdoor, pay-what-you-can performances.

Indeed, at the moment, Measure for Measure is getting an entirely satisfying production directed by Severn Thompson with familiar Shaw and Stratford faces in the juicy roles of the Duke, Isabella and Angelo.

Although skillfully shrunk down to 90 minutes, the play’s plot remains the same: Duke Vincentio (Allan Louis) says he’s going away on business and leaves licentious Vienna in the hands of the moralistic Lord Angelo (Christopher Morris) – but then secretly sticks around in disguise to watch what happens in his absence.

Following a kind of broken-window policing approach to restoring public decency, Angelo quickly sentences a man named Claudio to death for impregnating a woman out of wedlock. But when Claudio’s sister Isabella (Natasha Mumba), a nun, shows up to plead for his life, Angelo’s true nature is revealed as he makes an indecent proposal: If she sleeps with him, he’ll let her brother live.

Louis, recently of the Shaw Festival, is an endearingly loopy Duke whose darker side slowly comes into focus. He reminded me of the British politician Boris Johnson – in that I initially found him charming and goofy, then gradually came to see him as a vain hypocrite wasting his natural leadership talents to advance nasty, simplistic politics.

Mumba, who spent the last three seasons at the Shaw Festival, is powerful as his opposite Isabella, a no-nonsense woman who actually believes in things, and whose key line here is: “I have no superfluous leisure.” The actor portrays the passion in Isabella’s advocacy and then outrage, but there is the hint of zealotry underneath.

Meanwhile, Morris, who has seasons of classics at Stratford and Soulpepper under his belt, makes Angelo seem a cross between Mike Pence and Pee Wee Herman. His is a simpler, more presentational performance that relies on language clearly spoken doing most of the work - but this “original practices” approach sometimes just works, especially when you’re acting Shakespeare in the outdoors. It was so effective here it made me wonder if the indoor Angelos I’ve seen, always so tortured, were trying to bring more psychological complexity to the bad guy that can actually be borne.

Other notable turns come from Emilio Vieira, delightful as the louche Lucio, and Heath V Salazar, who brings a freshness and perfect comic timing to Pompey, a bawdy character who finds a way to profit from the cleaning up of Vienna. (A quick note for parents, so you can prep for questions: Drugs go up noses often and a sex toy briefly makes an appearance in this production.)

This is one of those Shakespeare productions where something suddenly clicks as a viewer: Measure for Measure, often considered tonally difficult and a “problem play”, makes total sense when you realize the Duke thinks he’s in a madcap comedy, and Isabella thinks she’s in a tragedy. Thompson’s production lets the play live in both their worlds and thus feels astonishingly like our own divided world today, where people with power and privilege have the luxury of not taking things seriously, and those that don’t are often written off as prickly and self-righteous.

Thompson has set the play in what she calls an “alternative now”, which makes a lot of sense because that’s how Shakespeare appropriated Italy in his plays – as a land of the imagination, in which he could explore issues of his time and place without directly doing so.

It’s enlightening to see Measure for Measure in repertory with Much Ado About Nothing, also set in Italy, also concerned with women and the right to their bodies, and also involving a pretend death.

Director Liza Balkan follows a more standard approach of relocating a Shakespeare play to a specific place and time – in this case, Ontario cottage country in the late 1990s.

The chief reason to see it is Rose Napoli’s engaging performance as Beatrice, here a stand-up comedian in the style of Janeane Garofalo sporting an “I Survived the Ice Storm” T-shirt under a Jennifer-Aniston-in-Friends vest.

She skillfully delivers interpolated monologues full of 90s references to Bill Clinton and match.com to the audience, then shifts into Shakespeare when talking to everyone else.

But the dressing is better than the salad - and, as with most Shakespeare productions that shift time and place, eventually the friction between the play and the setting chafes. Here, it starts when all the male characters except Beatrice’s love interest Benedick (Jamie Robinson) suddenly reveal themselves as terrible misogynists on Hero’s wedding day, tricked into believing she was visited by another man the night before.

Though Balkan sets up the 90s as a time when male comedians thought the height of hilarity was shaming Monica Lewinsky, these men aren’t making jokes - and it’s hard to swallow a production in this period when it course-corrects to comedy again and we head towards the usual Shakespearean happy ending complete with wedding.

With all the interpolated text here, why not fully rewrite the play’s ending to keep Hero from marrying the jerk who left her at the altar? Interesting that Much Ado, rather than Measure for Measure, comes out of this summer-rep run looking like one with an impossible tone.

Review
Shakespeare in Love at Vancouver’s Bard on the Beach is very much about a love affair with the theatre
Subscriber content
June 25, 2019 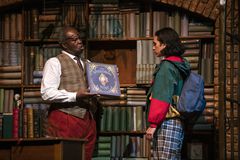