There’s a stinging coda to Kate Hennig’s new play Mother’s Daughter, in which Mary Tudor (Shannon Taylor), aka Mary I, the first queen regnant of England, complains about how she is remembered or, rather, isn’t.

She’s buried beneath the tomb of her much more famous half-sister, Elizabeth I – and everyone confuses her with Mary Stuart, aka Mary, Queen of Scots, except when she is referred to as “Bloody Mary.”

A double standard, certainly – but is this the final goal of feminism? For female rulers who burn “heretics” to be called great as male ones are?

Mother’s Daughter is an ambiguous conclusion to Hennig’s Queenmaker trilogy, which explores modern questions about women and power by looking back at Tudor history. The plays have been rolled out in two-year intervals at the Stratford Festival, in productions directed by Alan Dilworth.

Hennig’s project began in 2015 with The Last Wife, which concerned Katherine Parr, the only wife of Henry VIII to outlive him, and her relationship with the king’s daughters, Elizabeth and Mary.

That play has had nearly a dozen productions now, with the Australian premiere coming this fall; its sizzling Elizabeth-centric sequel, The Virgin Trial, has been nominated for Outstanding New Play at the Dora Mavor Moore Awards (thanks to a great rule change that allows Canadian plays having their Toronto premiere, not just world premieres, to compete).

In Hennig’s first play, a young Mary mocked Katherine for running a “school for queens” – but, in this final one, she has to try to take her stepmother’s ideas and put them into action.

Mary’s cousin Lady Jane Grey (Andrea Rankin) is proclaimed queen following the death of Edward VI – but, before her coronation, Jane is ousted by Mary’s supporters, who put her on the throne.

The new queen Mary I’s goals are to produce an heir to help retain power, and to restore the old Roman Catholic religion of her mother, Catalina (whom you know better as Katherine of Aragon).

She receives advice on whom to marry, kill or chuck into the Tower to achieve those goals from two female advisers named Bassett (Beryl Bain) and Susan (Maria Vacratsis) – and a man named Simon (Gordon Patrick White), a Spaniard who sits on the Privy Council.

In addition to acting and writing, Hennig is the associate artistic director of the Shaw Festival – and perhaps that accounts for the Shavian feel of these scenes, debate as much as drama. Though, as if anticipating this critique, she has Simon, the most two-dimensional and sexist of the characters, continually deride Mary, Bassett and Susan for their “women’s chit-chat” bogging down the action.

More intriguing are Mary’s interactions with her poker-faced half-sister, Bess (mischievously played by Jessica B. Hill), and imprisoned, idealistic Jane, whose true levels of threat to her rule she must discern.

Mary’s other (worldly) sounding board on these matters is Catalina (Irene Poole, who is also playing Shakespeare’s idea of her in Henry VIII this season). Sometimes, Elizabeth’s mother, Anne Boleyn (played by Hill, in an off-balance bit of doubling), joins in.

Stratford Festival 2019: Little Shop of Horrors and the horror of musical theatre as a joke

Procrastinating from decision-making while being goaded on by apparitions turns Mary into a Hamlet figure. Her inconsistent acknowledgment of these ghosts as figments of her imagination makes these scenes a bit dramatically muddy, however. Are we watching Mary argue with herself? Or are they really communicating from beyond the grave?

I initially found it hard to shift from the slacker Mary incarnated by Sara Farb in the previous two instalments of Hennig’s trilogy to Taylor’s starchier Mary, a move from sarcastic to self-conscious, aloof to emotional. (Farb is now in the Harry Potter plays on Broadway.)

By the second act, however, Taylor had fully made Mary her own – and it certainly helps when Dilworth and designer Lorenzo Savoini get her out of a flowing white skirt and into comfortable black pants and allow her more movement that makes the play feel less talky and blocky.

Still, Hennig’s writing can be hard to sell at times. The playwright, embracing anachronism even more than before, has Mary saying “criminy” one moment, then proper Anglo-Saxon curse words the next. “Let’s get the hell out of dodge!” in one scene, then: “I’m the guy."

Weaknesses of individual plays aside, Hennig has nevertheless accomplished something impressive with her trilogy as a whole – finding something original in the well-sifted remains of Tudors, and an original way to say it. 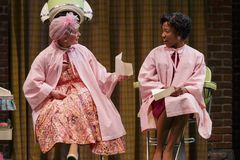 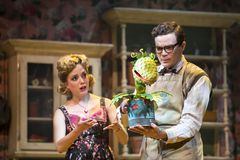 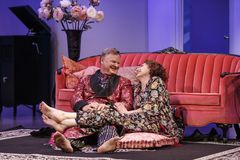