Ballet companies celebrate milestones in their history by commissioning new work. In keeping with that tradition, the Royal Winnipeg Ballet is commemorating its 75th anniversary with an ambitious new ballet by choreographer Mark Godden, a former company dancer and resident choreographer. The subject, however, is decidedly dark.

Going Home Star – Truth and Reconciliation tackles the traumatic legacy of residential schools, where generations of aboriginal children were torn out of their native culture in order to be "Canadianized." As the name of the piece suggests, though, the ballet is not all doom and gloom. Godden and his collaborators see light at the end of the tunnel, where damaged souls can find closure.

Of note is the fact that there are no First Nations dancers in the company, and only three of the creative team (scenarist Joseph Boyden, set designer KC Adams and associate producer Tina Keeper) are of aboriginal heritage. But while creating the work, RWB artistic director André Lewis has taken every precaution to dispel the dreaded tag of cultural appropriation.

First and foremost, close ties were established with the Truth and Reconciliation Commission itself. In fact, Godden followed the live streaming of the hearings to immerse himself in the testimonies of the victims. At each performance of the ballet there is an Elder Corner in the lobby where audience members can learn more about residential schools firsthand. There are also on-site counsellors (wearing special vests) for those who are deeply disturbed by images in the ballet. To further immerse themselves in native culture, the entire RWB company decamped to a local reserve to participate in a sweat-lodge ceremony.

Acclaimed author Boyden has written an exhaustive four-page synopsis (in small print) that has to be read to come to grips with both the detailed action and symbolism in the work. In other words, the story is very complicated. One can certainly get the gist of the choreography just by watching, but the finer points are obscure. For example, how can the uninitiated know (without the synopsis) that the coloured ribbons placed on trees represent the healing power of the medicine wheel?

The first act is about finding truth. Annie (Sophia Lee) has long left her aboriginal roots behind. She's a big-city hair stylist who engages in casual sex and sniffing cocaine. She meets Gordon (Liang Xing), a homeless man, broken by his residential past. He is also a trickster with magical powers, and he leads Annie to her people's tragic history by introducing her to two residential students, Niska (Alanna McAdie) and Charlie (Yosuke Mino). The Clergyman (Dmitri Dovgoselets) is a pedophile and rapist.

The second act is the reconciliation. Annie now takes the lead and becomes the agent to heal Gordon. They meet the Elders, Mother (Yayoi Ban) and Father (Thiago Dos Santos), who represent the best of the Earth. Quartets with Niska and Charlie, and sextets with the Elders and the students, show happier days. When Annie gives Gordon the flame to burn the maquette of a residential school, his burden is lifted.

The title, Going Home Star, stands for the North Star, which helped native people in their navigation. For Annie, the North Star points her in the direction she must take to heal Gordon. The corps de ballet of Star Children, who revolve around the North Star, are the ancestors and spirit guides.

Godden is not an innovative choreographer. He sticks to basic ballet vocabulary, but his many years of experience allow him to weld the steps together to create a big picture. For example, he has turned the Clergyman and his cronies, garbed in their long cassocks, into whirling dervishes of overpowering, evil energy. On the other hand, the Star Children are serene in their harmonious patterns. Godden's portraits in movement of his main characters are certainly delineated. He has created individuals on the stage.

The choreographer is aided by celebrated composer Christos Hatzis's organic score. In fact, the music for Going Home Star may be the best ballet composition ever created in Canada. Part live orchestra, part tape, with the collaboration of the magnificent Inuit throat singer Tanya Tagaq and the exciting powwow rituals of the Northern Cree Singers, Hatzis's score embraces the story like hand to glove. His musical detail evokes each scene perfectly, whether the disco frenzy of Annie's nightclub, or the symphonic sweep of the grandeur of the northern woods, or the gentle harmonies of the Elders. Hatzis has created a cascade of musical images that bring the characters and the story to life. It is in the score that imagination lives.

In the final analysis, Boyden has injected enough conflict in the story to hold attention, while Godden has mostly succeeded in rendering the basic plot elements with clarity of movement. The trauma of residential schools is writ large as the company's strong dancers eat up the stage. Adams's simple set that cleverly juggles the past and the present, Paul Daigle's evocative costumes, Pierre Lavoie's magical lighting and Sean Nieuwenhuis's eye-catching projections are all top of the line. This is a ballet that looks very good. 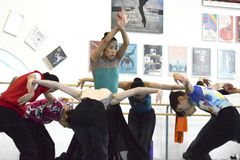 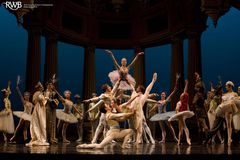