At Soulpepper in Toronto

I can't tell you how many plays I've had to watch over the years where a group of characters from different backgrounds, holding varying political views on some current hot-button issue, somehow, miraculously, end up at the same dinner party. Polite conversation inevitably transforms into impassioned debate; guests get smashed, and then plates do. I can't stand this clichéd and contrived form of theatre.

Full points, then, to Diane Flacks for skipping the meal and simply staging the debate in her new play, Unholy. She's gathered four female characters – a lesbian atheist, a progressive Muslim lawyer, an Orthodox Jewish spiritual leader and an excommunicated nun – into a more natural habitat. They're recording a panel discussion for a YouTube channel called Unique Ideas Now on the question: "Should women abandon religion?"

It's a canny format and perfect for a city that loves events such as the Munk Debates. Flacks writes pompous and preening punditry really well – and the actors in her play's premiere all deliver it with the appropriate authority.

The playwright herself is marvellous as Liz Feldman-Grant, a fiery and frank author in the Christopher Hitchens mould who has written a book called A Genocidal God, while Bahareh Yaraghi is perfect as the charismatically soft-spoken Maryam Hashemi, who defends the right to wear the niqab from a liberal perspective and emphasizes Islam as a religion of peace.

Niki Landau is luminous as a female rabbi, Yehudit Kalb, especially during a stirring speech about the beauty of the biblical tale of Lot's Wife turning into a pillar of salt – a story that the others dismiss as merely misogynistic.

Barbara Gordon is solid as a woman who doesn't fit into the debate (or the play) as well, a nun named Margaret Donaghue, excommunicated for approving an emergency abortion at a Catholic hospital. She has to have her nuanced positions coaxed out of her by the male moderator (a very funny Blair Williams). What makes Unholy a compelling play, however, isn't the ersatz argumentation, but how Flacks cleverly shows how public debates and panels are always, ultimately, performances. This is best illustrated in flashbacks to an encounter between Liz and Maryam at a hotel the night before. Over a bottle of wine, their political positions on religion – crystal clear and sharply articulated on the panel – are revealed to be brands, their actual private feelings to being much more complex.

Both Landau and Gordon have to prove the same point about their characters in solo flashbacks – and it works to lesser effect in one case, and not at all in the other.

But with the help of precise work from her lighting and music designers Bonnie Beecher and Richard Feren, director Kelly Thornton has delivered a fast-paced and almost entirely enjoyable premiere production of Flacks's show for Nightwood Theatre. Brilliantly acted, it's at times moving and, at others, surprisingly steamy.

Over at the Soulpepper Theatre Company, Kate Hennig's The Last Wife has opened with the same cast and director who originally premiered the show about Henry VIII's sixth and final wife, Catherine Parr, at the Stratford Festival in 2015.

Despite Henry's (Joseph Ziegler) penchant for chopping off the heads of previous partners, Parr (Maev Beaty) somehow survives the marriage – and even manages to convince her husband to restore his daughters Mary and Elizabeth to the line of succession, setting the stage for the first queen regnant in English history.

The Last Wife seems much more timely than it did two summers ago, with its central question: What can a woman do when power is held by a capricious male fascist? Parr gets her way by focusing on the future – and also never giving up on the possibility of Henry's humanity. "It's never too late to heal," she tells him, albeit about a leg wound.

While The Last Wife remains an impressive play-writing debut from Hennig, an actor whose extraordinary stage presence you can currently witness as she brings Margaret Thatcher to furious life in The Audience at the Royal Alexandra Theatre, I still have the same qualms about it as when I reviewed it at Stratford. The writing and structure and Alan Dilworth's direction all feel choppy – and Parr is too much of a superheroine, with no flaws to make her human.

It's the complicated daughters, Elizabeth (played by standout Bahia Watson) and Mary (a drolly dark Sara Farb) who are the most compellingly drawn. And so, I wait eagerly for the premiere of The Virgin Trial, Hennig's sequel which focuses on them, at Stratford Festival this summer.

Kate Hennig on politics, Slinkys and the British monarchy
January 26, 2017 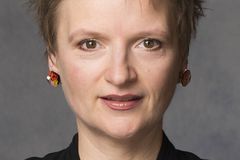 Review
Unpredictable one-act play Liv Stein examines the slipperiness of truth
January 27, 2017
Review
A comedic clash of classes at The Wedding Party
January 25, 2017
Follow J. Kelly Nestruck on Twitter @nestruck
Report an error
Due to technical reasons, we have temporarily removed commenting from our articles. We hope to have this fixed soon. Thank you for your patience. If you are looking to give feedback on our new site, please send it along to feedback@globeandmail.com. If you want to write a letter to the editor, please forward to letters@globeandmail.com.
Comments