Niagara-on-the-Lake, Ont., is a "no shoes, no shirt, no service" kind of small town. I guess the Shaw Festival must worry that the theatregoers who flock there each season are also "no curtain, no scenery, no tickets" types.

How else to explain the overdesigned production of Our Town directed by Molly Smith that opened its 2016 season on Thursday night? Thornton Wilder's 1938 play famously opens on an empty stage – "No curtain. No scenery" – with the Stage Manager presenting Grover's Corners, N.H., at the turn of the (past) century, walking us down Main Street in our minds.

Smith's production begins with the Stage Manager (Benedict Campbell, gradually sinking into the role) shuffling furniture around with a pair of stagehands for a minute or two while they wait for James Smith's plangent prerecorded string music to set a mood that would be more effective if we were eased into it.

Our narrator then takes us on a tour of Grover's Corners – but the twists and turns are signalled by a barrage of lighting changes and sound cues. As for the empty stage, it's an empty stage as if redesigned by Apple – the crisp, clean and tasteful work is Ken MacDonald's. Bright white stylized chairs, planks and trellises help delineate space – as, eventually, do a couple of oversized iStepladders that teenage sweethearts Emily Webb (Kate Besworth) and George Gibbs (Charlie Gallant) ascend to exchange algebra hints and sweet nothings.

The actors mime all their actions instead of working with props as usual, but here their motions are accompanied by a stream of sound effects – doors creaking open or slamming shut, newspapers hitting a door with a thud.

What hampers the production most, however, are the high-fashion, low-taste costumes by designer William Schmuck. In contrast to MacDonald's set, Schmuck's colourful contributions are gaudy – distractingly shiny and designed to make an impression.

Many of the costumes swaddle the women so thoroughly that it makes a mockery of their attempts to mime household duties – and they couldn't possibly clash more thoroughly with Wilder's pared-back esthetic and plain-spoken dialogue.

Smith gilds the lily in her staging as well. Time spent working on unnecessary flourishes – such as snapshot, freeze-frame tableaus – would have been better spent mining the eternal truth in these characters and their lines.

Instead, the cast of Our Town perform as if they are in an okay revival of a Rodgers and Hammerstein musical, with lots of goofy stage business and aw-shucks delivery and (again, unnecessary) New Hampshire accents that roam far and wide.

This all reinforces rather than dispels the misconception that Our Town, which was influenced by Noh theatre, French playwright Paul Claudel and experimentalist Gertrude Stein, is a Norman Rockwell painting brought to life.

Inevitably, with such a superbly crafted script, some fine moments shine through. Catherine McGregor gives a compellingly down-to-earth, hard-done-by Mrs. Gibbs – and is particularly chilling in the graveyard scene. Across the picket fence, Patrick McManus gives us a Mr. Webb with a bristle that lets him effectively appeal to our sentimental side later on. And Besworth hits the right level of precociousness as Emily Webb.

Yet this to me is the rub: I've seen amateur productions of Our Town, straightforward but professional productions and experimental, edgy ones, but I've never made it through the show without my cheeks getting wet.

Despite an off-putting musical interlude with the curtain down instead of a second intermission, I thought things were headed that way in the third act here. I was really pulled in as Campbell's Stage Manager moved away from folksy control to the unsettling anxiety that the actor does so well. Then, David Ball gave one of the simplest, most honest performances of the evening as a former resident of Grover's Corners returning for a funeral.

Alas, it all unravelled in the final flashback scene, which is usually the emotional climax of the play. Following in the footsteps of David Cromer's exceptional off-Broadway production, Smith moves the actors to real props here – but with the actors moving in slow motion, it feels like a gimmick. When the stagehands came back on in slo-mo and snow started to fall, some of the sweetest, truest words in all of American drama were thoroughly undercut. What a shame.

One final observation: This is a show aimed at families, with a cast of 19 – and every single actor on stage is white. To give you an idea of how regressive this is, let me point out that not one of Stratford's 13 productions this season has an all-white cast. I don't say this to be the diversity police, but because, in a play that is explicitly non-naturalistic, this gave every reference to "our" town an edge. Is this what Schmuck's costumes are trying to distract us from?

Our Town continues to Oct. 15 (shawfest.com). 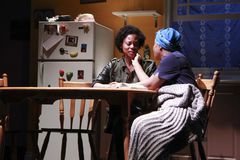 Theatre Review
Ultrasound is a dark drama that tests personal politics
May 6, 2016 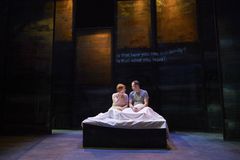 Theatre Review
Against Nature: A sinister adaptation of Huysmans’s novel À Rebours
May 6, 2016 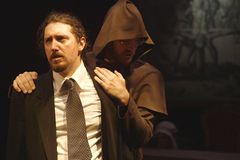