That's the unintentional tension lying beneath the surface of Rare, a Toronto Fringe Festival sensation last summer created by playwright Judith Thompson with nine such performers, now being remounted at the Young Centre.

In recent years, Thompson has crafted shows in which non-actors tell their real-life stories, in addition to her more traditional scripts about invented underdogs.

This sideline began, at the behest of a soap company, with a piece called Body & Soul, which starred a dozen "real women" over the age of 45. Then came The Grace Project: Sick!, a less-focused experiment that assembled a group of "younger people facing serious adversity."

Krystal Hope Nausbaum, who once starred in a TV movie with Emily Watson, was the standout in The Grace Project, her energy, ambition and honesty leaving an indelible impression.

Apparently, Rare was created in part so Nausbaum would have another show. Alas, it doesn't give her much opportunity to exhibit her talents; instead, it simply puts her on exhibition. (She is a credited co-creator: So I should say, she puts herself on exhibition.)

Much of what Rare's cast shares in the 60-minute play is either eye-opening or moving. Suzanne Love, who speaks haltingly but dances without inhibition, tells the awful story of the shooting death of her brother – and of then accidentally stumbling upon footage of the crime scene on TV. The myth that the intellectually disabled are somehow innocents who live in a childlike state is shattered.

Despite having shorter life expectancies, many of the creator-performers express fears not of their own deaths, but of those of parents and caregivers. There is yearning for freedom and independence, but also a terror of it. Andreas Prinz, the eldest of the group, comforts his cast-mates, telling them he's taken care of himself since his mother died and his father left the country.

In many moments I wanted to know more: Why did Prinz's father leave? Is he angry with him? Rare doesn't exactly avoid difficult areas – about bullying or sex, for instance – but it leaves these questions dangling.

Hamlet's "to be or not to be" speech, for example, segues into a scene about women who choose to have abortions rather than delivering children with Down syndrome.

Nicholas Herd, an emotive dancer who treats his homosexuality in a refreshingly matter-of-fact way, notes the rage he feels about that. Then, Nausbaum recites a letter she has written to pregnant women urging them to "be brave." This seems like the slightly hair-raising point of the show: Here we are, dancing, singing and sharing – please, allow us to exist.

But the implications aren't probed. If it's cowardly for a woman to abort a child she doesn't think she can handle raising because it has Down syndrome, then how is it right to abort a baby she thinks she can't support for more prosaic financial reasons?

Rare may, indeed, be a rarity – a pro-life play. (Perhaps Canadian theatre's most notable lack of diversity is in terms of ideology.)

At the after-show talk at the final preview I saw, Thompson referred to Rare as something like "documentary theatre." Looking at it from that angle, it's a failure. The playwright lets her collaborators control the conversation, and lets them stop talking exactly when things get uncomfortable.

Rare has its own value, but I did find the ambiguity over whether the audience is supposed to celebrate the cast as performers or as people problematic.

The line is blurred as both Nausbaum and a young man named Dylan Livaja confess to being frustrated by their attempts to get into theatre school.

I can think of a number of avant-garde directors who would probably want to collaborate with them on challenging projects. Under Thompson's wing, however, while they no doubt have some creative agency, they still end being more subject than artist – and that's, ultimately, a dead end for their ambitions.

Can a play with a mentally challenged cast be reviewed by critics in the standard way?
February 2, 2013 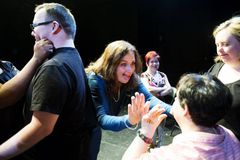 White Biting Dog: These people need to be saved. So does the production
August 19, 2011 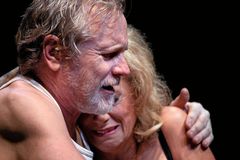 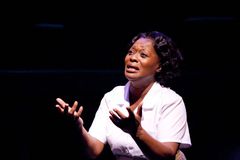