Sousatzka, an ambitious mess of a new musical conceived of and creatively produced by Garth Drabinsky, has a wonderful title character.

Madame Sousatzka, as the Jewish piano teacher living in a house full of an assortment of misfits in 1980s London prefers to be known, is a captivating eccentric – as least as played by Tony-winning actress Victoria Clark. She smokes and fusses and never stops talking during lessons; she makes grand gestures, such as lying flat on the floor, when she needs to make a point; and, as odd as she is, she radiates authority and intelligence when she speaks about piano: "Music is not what you do; music is who you are."

Madame Sousatzka has hidden secrets from her past in Poland, too, gradually revealed in flashbacks, that make her attach, perhaps too strongly, to her students.

Perhaps there's a small, smart show to be written about this Sousatzka – but unfortunately, she's living in a bombastic, incoherent one at the moment.

With songs by Richard Maltby Jr. and David Shire (perhaps best known for 1996's Big), it has moments of musical beauty (mostly when Clark has something operatic to sing), but they're lost in the larger muddle – disjointed, indecisive and just plain confused. The big problem at the centre of the show is Themba – a black South African piano prodigy who has fled to London with his mother after his father was imprisoned for treason.

"Who am I?" Themba sings, or something to that effect, at several moments in the first act – and you get the feeling the book writer, Craig Lucas, and the songwriting team are actually asking themselves that question.

Sousatzka is based on a 1962 novel by the late Bernice Rubens called Madame Sousatzka, which obviously contained no scenes set in the Soweto uprising of 1976, but none in the Warsaw Ghetto, either. It was focused more tightly on a Jewish piano prodigy named Marcus torn between his mother and the titular instructor. In the 1988 film of the book, the gifted pupil became a Bengali boy named Manek.

Now, we have Themba – played by Jordan Barrow, who communicates a sort of performative panic and mimes quite well behind a piano, but is otherwise a cipher whose very specific background seems largely like dressing. Why does this "genius" from Soweto connect with classical music? Is he using Bach and Beethoven to rebel against his parents and their music, or to combat the oppression of apartheid – or does he simply want to escape?

There's no room there for Barrow to play, unfortunately – which gives little for Montego Glover, as his mother Xholiswa, to build her own performance around. We're told Themba is torn between Xholiswa and Sousatzka, but don't really see any dramatization of it. The young pianist simply keeps showing up for lessons and eventually gives a triumphant concert that takes the musical into the realm of complete and utter fantasy – and the turmoil of the past in Soweto and Warsaw is merely a backdrop.

If it's unclear what the story of Sousatzka really is, we know what the musical wants to stand for – a "Rainbow Nation," the title of a sort of stirring second-act anthem that is also repeated after the curtain call.

Perhaps part of the problem is the creative team assembled by Drabinsky doesn't live up to that ideal – if the show is so much about the identity of a black South African in exile playing Eurocentric music, it really could use a writer who can tackle that subject matter with confidence in a contemporary way.

Instead, Lucas's book and Maltby's lyrics are distant and obscure about race – with Madame Sousatzka singing about how different Themba is for her, and how similar he is, but never really explaining how.

While the title character is superbly drawn, there are a whole host of South African characters with unclear aims and desires. This is inadvertently echoed in the projections designed by Jon Driscoll – which show us faceless black bodies lying in the streets of Soweto, but later flash us a thousand portraits of Holocaust victims.

What happens in the present London of the 1980s is full of secondary characters – from an adulterous impresario to an oddball osteopath to a hilariously underwritten and oversexualized girlfriend for Themba who dances for him in his dreams as if out of A Chorus Line – but is remarkably short on incident. It veers widely in tone from song to song – and Lucas's book changes style every five minutes it seems, dialogue suddenly replaced by direct address, as well as many confusing scenes set in two time periods at once that leave Clark talking to a piano as Barrow wanders off into memories.

Shire and Maltby have written a few truly lovely songs in a classic Rodgers and Hammerstein vein – a gorgeous duet called Let Go, between Clark and Judy Kaye (playing a character who does not matter in any way), is the standout. Their attempts to write South African tunes – even with an assist from South African composer Lebo M. – communicate little beyond a fuzzy sense of solidarity and resistance. (As for the 1980s dance number sung by a clown-punk named Jenny, the less said the better.)

As director, Adrian Noble must be blamed for the mishmash of a production.

On the whole, I did admire the ambition behind Sousatzka. If you were to walk into a rehearsal room and listen to a sing-through of this version, you might be impressed by a work that attempts to grapple with big themes and big issues. But as a full production that's billing itself as "prior to Broadway," however, it's a disappointment. Drabinsky's done a disservice to his show by shining too big a spotlight on it before it's ready, which is exactly what Madame Sousatzka warns against in regards to Themba, incidentally.

Drabinsky’s Sousatzka return is less a comeback than his chance to prove himself, again
March 12, 2017
Drabinksy-owned company poses no threat to investors, OSC told
February 23, 2017 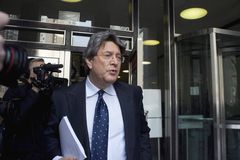 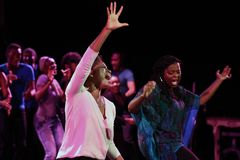