As a writer who plays the dual roles of theatre and film critic, I'm accustomed to bouncing between the two mediums. Now, thanks to Electric Company Theatre, I'm able to wear both hats at once.

The Vancouver company's ingenious Tear the Curtain!, kicking off Canadian Stage's 25th season, is a full-on mash-up of theatre and film in which the action unfolds (or should that be unspools?) as much on the screen as on the stage. In fact, director Kim Collier – that wizard of the West Coast, now Canadian Stage's "resident artist" – has entwined the two so artfully that after your initial delight in the fluid shifts between movie and play, you're likely to forget which is which.

Unfortunately, by the end of the show's overlong 2.5-hour running time, you're also likely to have forgotten what the point of it all was. The script by Jonathon Young and Kevin Kerr is also a mash-up, but a much lumpier one, combining an amusing pastiche/parody of classic Hollywood film noir with surreal, nonsensical twists that recall one of David Lynch's more enigmatic flicks. It's a meld of the old-fashioned and the avant-garde that makes a rather laboured attempt to explore the differences between the theatrical and cinematic experiences.

Young and Kerr have cooked up a fanciful tale set in Vancouver in 1929, when the advent of talking pictures is proving a threat to live theatre. They are also threatening the livelihood of theatre critics like Alex Braithewaite (played by Young), who finds his column inches in the local newspaper being usurped by movie reviews.

Caught in a sudden identity crisis, Alex seeks answers in the experimental work of deceased theatre guru Stanley Lee (James Fagan Tait), whose Empty Space Theatre was dedicated to creating something called "ultimate presence" – the antithesis of cinematic escapism. Alex discovers that Empty Space still exists as a radical underground movement and – via the manipulations of glamorous actress Mila Brook (Laura Mennell) – he becomes a pawn in a plot to bring Lee's teachings to life.

That puts him smack dab in the middle of a turf war between a pair of rival showbiz mobsters (Gerard Plunkett and Tom McBeath, serving up some tasty ham). Both have their greedy eyes on the piece of real estate that will become the future Stanley Theatre – the vintage Vancouver cinema-turned-live venue where Tear the Curtain! had its premiere in 2010. The history of the Stanley was, in fact, one of the primary inspirations for this show.

Toronto's Bluma Appel Theatre does not share those roots, but it's a fine stand-in for a movie house. And, as Electric Company proved with its previous Canadian Stage show two seasons ago, Studies in Motion: The Hauntings of Eadweard Muybridge, this indie troupe has no problem filling its vast stage. David Roberts's multilayered production design riffs on the curtain theme: A red velvet drop conceals a movie screen that fills the entire proscenium space. This, in turn, rises to reveal a two-tiered set doubling as Alex's apartment building and a Front Page-style newspaper office. The film portions are projected on the big screen, on scrims and directly onto the set.

Collier's direction employs the advantages of both mediums. The filmed scenes (shot with flair by cinematographer Brian Johnson) give us close-ups, montages, real locations. The live scenes have immediacy. At her most playful, Collier blends the two, so that the actors are onstage and on film simultaneously.

The cast has good fun with its old-movie stereotypes. Young's hard-drinking Alex comes off like a slightly seedy Gary Cooper, while Mennell is suitably sultry as the femme fatale. But Dawn Petten is the standout, bringing screwball charm to her role as Alex's lovelorn secretary.

The film critic part of me came away appreciating Tear the Curtain!'s affectionate use of the noir genre. But the theatre critic felt that its ideas were not sufficiently developed. Both, however, applaud Electric Company's brilliant fusion of two enduring art forms.

Tear the Curtain! runs until Oct. 20. 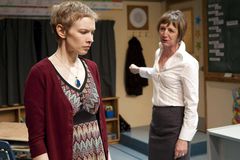 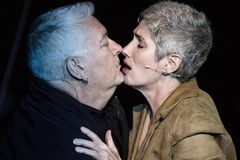