Close to $2-billion has been wiped from Alberta’s rainy-day savings fund – erasing seven years of gains for the portfolio – partly as a result of a volatility strategy executed by Alberta’s public-sector investment manager.

The Heritage Savings Trust Fund 2019-20 annual report, obtained by The Globe and Mail, paints a picture of a fiscal year that started out strong. But “sharp and drastic” drops in asset values beginning in mid-February saw the fund limp to the end of the year with a 5.1-per-cent loss and a drop in value by 10.4 per cent.

Worth $18.2-billion at the start of the financial calendar, the fund – Alberta’s main long-term savings plan – ended the year at $16.3-billion.

The heritage fund was established in 1976 from a portion of the province’s oil and gas revenues. Since then, income from its investments has contributed nearly $44.5-billion toward provincial programs including health care, education and infrastructure.

It is one of 31 accounts and pension funds for which Alberta Investment Management Corp. (AIMCo) invests.

Earlier this year, AIMCo lost $2.1-billion on a wrong-way bet against market volatility. It invested in derivatives that paid a steady return as long as markets remained stable, but they went on a roller-coaster ride in March in response to economic upheaval caused by the coronavirus pandemic.

The volatility strategy resulted in a $420-million loss for the heritage fund and reduced returns by 2.4 per cent, according to the report.

AIMCo has since scrapped the volatility trading strategy, and an investigation by its board of directors concluded this week that the public-sector investment manager suffered from an inappropriate approach to risk management and substandard oversight. It has adopted a series of new policies aimed at preventing similar outsized trading losses, the board said.

The loss at AIMCo fuelled intense debate in Alberta over Premier Jason Kenney’s recent legislation that puts more public pension plan funds under the AIMCo umbrella, and his proposal to pull out of the Canada Pension Plan and launch a provincial one, possibly managed by the Crown corporation.

The heritage fund report says although central bank intervention improved the economic situation by the end of the fiscal year on March 31, 2020, compared with mid-March lows, it’s unclear what the path to recovery will look like or what the long-term effects of the pandemic will be on Alberta’s economy.

Alberta faced the COVID-19 pandemic with an already-shaky bottom line that still hadn’t recovered from the recession caused by an oil prices nosedive between 2014 and 2016. The virus-caused lockdown, coupled with another oil price crash and crippled crude demand, has left the province facing an uphill economic battle, with effective unemployment hovering around 25 per cent – well above the national average.

Finance Minister Travis Toews said the fund will play an important role as the province recovers from its fiscal uncertainty and, as the minister ultimately responsible, he will continue to monitor and review the fund’s performance.

In an e-mail, Mr. Toews said he couldn’t comment directly on the numbers in the report until it is tabled before the legislature, but he wasn’t surprised the fund was negatively affected by the global coronavirus recession.

“The fund has historically performed very well and I have confidence that it will recover alongside the global economy,” he said.

The annual report notes that fund managers will seek opportunities to recoup its recent losses, but cautions that a patient approach to investing is necessary to ensure the long-term value of the portfolio.

The heritage fund holds a broad swath of investments, from bonds and real estate to infrastructure and private debts and loans. About $1.5-billion of the fund is invested in Alberta, including in various publicly traded companies headquartered in the province, real estate, oil and gas, renewable energy and agriculture.

But equities – Canadian, global and private – hold the largest weight in the fund’s asset portfolio. They comprised 44.8 per cent of the fund at the end of 2019-20, a 2.5 per cent increase over the previous year.

It was equities that experienced the swiftest drop over the fiscal year, shedding 13.3 per cent of their value.

The fund’s Canadian equities were hit particularly hard, falling by 23.2 per cent, while its global equity portfolio lost 14.4 per cent for the fiscal year. That surpassed the drop in the MSCI All Country World index (a global index of publicly traded stocks) by 8.9 per cent. 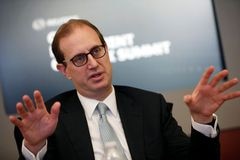 Follow Emma Graney and Jeffrey Jones on Twitter @EmmaLGraney @the_Jeff_Jones
Report an error Editorial code of conduct
Due to technical reasons, we have temporarily removed commenting from our articles. We hope to have this fixed soon. Thank you for your patience. If you are looking to give feedback on our new site, please send it along to feedback@globeandmail.com. If you want to write a letter to the editor, please forward to letters@globeandmail.com.
Comments