Plainspoken and unpretentious, Clay Riddell was a self-made oil and gas magnate, restaurant owner and philanthropist who ascribed his success in the turbulent world of global energy to trying lots of “stuff” and striking it lucky.

“Don’t be a spectator,” Mr. Riddell counselled graduating students at Carleton University in November, 2014, during a ceremony in which he was given an honorary doctorate. “Be a part of life and make sure near the end of it that the list of things you wish you had done is shorter than the list of things you did.

“I’ve had more than my share of luck,” he continued with his omnipresent half-smile. “The harder you work, the luckier you get.”

Mr. Riddell, the founder and former chief executive of Paramount Resources Ltd. and a co-owner of the Calgary Flames hockey team, died on Sept. 15 in Calgary after a brief, unspecified illness. He was 81. A son of the Prairies, he amassed a fortune that Forbes magazine pegged at $1.2-billion this year, but you would never have suspected it if you met him face-to-face.

“He always gave, he never took and he preferred to listen,” said Ken King, the president and CEO of the Calgary Flames, who approached Mr. Riddell in 2003 to become a part owner of the team. “This is how I’ll remember him: humble to the max, with not an affectation in the world.”

Through the vicissitudes of the industry, including the National Energy Program in the 1980s and the collapse of the price of oil in 2014, through all the criticisms, accolades and awards, a bespectacled Mr. Riddell simply got down to work and did what was needed, Mr. King continued. Oil and gas exploration has always been a risky venture, he noted. Sometimes, it works. Sometimes, it doesn’t.

“Clay faced some serious business challenges but, in the end, he had more successes in his ledger than he had failures,” Mr. King said. “You know, a lot of people come to the end of their careers and sort of reverse-engineer, or rewrite, what they did to get there; how they brilliantly planned and strategized. But not him. His is a great story of honesty, integrity and hard work.”

Clayton Howard Riddell was born on July 14, 1937, on a farm near Treherne, Man., a tiny community located halfway between Winnipeg and Brandon. He was the surprise youngest child of Cecil Howard Riddell and the former Bertha Maude Taylor, and a brother to Evelyn and Lillian.

The family lost their farm in the Great Depression and moved to Winnipeg, where young Clay learned firsthand how a bit of ingenuity combined with hard work and vision could make things work out. Common-sensical and book smart, he was a self-starter, earning a bachelor of science in geology at the University of Manitoba while working summers in the north of the province as a camp attendant and cook. He loved the land, with its stark formations, lakes and waterfalls, and, after graduating in 1959, began to work as an exploration geologist for the Standard Oil Company of California, later called Chevron. For a decade, he happily explored and mapped the Northwest Territories and the Yukon, gaining hands-on experience that would help when he started his own company, C.H. Riddell Geological Consultants Ltd.

Entrepreneurial down to his bones, in 1971, Mr. Riddell incorporated Paramount Oil & Gas Ltd.; seven years later, in December, 1978, its accumulated assets were placed in a public company called Paramount Resources Ltd. At the same time, he raised $5-million on the Alberta Stock Exchange, a sum that in today’s dollars would hover near $20-million.

According to the Canadian Petroleum Hall of Fame, Mr. Riddell’s early successes included finding shallow gas wells in northeastern Alberta, and he continually fine-tuned the application of air drilling technology in low-pressure gas reservoirs, which resulted in several large discoveries.

From Paramount, Mr. Riddell created the Paramount Energy Trust, which would become Perpetual Energy Inc., and the Trilogy Energy Trust. In 2015, he ceded control of the company to his son, Jim Riddell, staying on only as its chair. One of his daughters, Sue Riddell Rose, now serves as CEO of Perpetual Energy.

His philanthropic endeavours include a $10-million endowment for the creation of the Clayton H. Riddell Faculty of Environment, Earth and Resources at his alma mater, the University of Manitoba; the Riddell Library and Learning Centre at Mount Royal University in Calgary; and $15-million for the Clayton H. Riddell Graduate Program in Political Management at Carleton University in Ottawa. (This last donation caused controversy in 2012, with faculty and the Canadian Association of University Teachers calling the donor agreement a major infringement on academic freedom because it seemed to imply Mr. Riddell had the final say on both the curriculum and hiring of staff. Upon review, the agreement was rewritten to reflect that he was a “strategic adviser,” a role he had actually played from the start, according to Roseann O’Reilly Runte, who was Carleton’s president at the time.)

Along the way, he met and married Vi Thorarinson, who had moved from Manitoba to Calgary, where she worked as a nurse at Alberta Children’s Hospital for 30 years. They would have three daughters and a son, instilling in all of them a work ethic and sense of community. The marriage would last 49 years, ending only when his wife died of leukemia in 2012.

Typical of Mr. Riddell’s outlook, he mourned her, but didn’t let the loss drag him down. Life went on, he knew, each day as important as the one that came before. There were grandchildren’s sporting events to attend, NHL hockey games to cheer at and, eventually, a new love, Maria-Liisa Barnby.

For 40 years, he played a weekly curling match and he loved golf with his buddies, even – or especially – when the stakes for the winner were no higher than a toonie. He had season tickets to the Flames, and to the team’s predecessor, the Calgary Cowboys of the short-lived World Hockey Association. Mr. King recalled that when he asked Mr. Riddell to come on board as an owner, his answer was that he had to go home and confer with his wife.

The next day, he said yes – and Mr. King said he fit in with the other owners as if he had always been there, travelling with them en masse as the team went all the way that season to the Stanley Cup finals, where they lost narrowly to the Tampa Bay Lightning.

In light of the Flames’ success that year, Mr. King recalls assuring Mr. Riddell that it wasn’t always that simple.

“He replied, ‘Ken, it sure seems simple to me.’ But really, he knew it wasn’t. It was, as he always said, the result of lots of hard work – because that’s how you make your luck.” 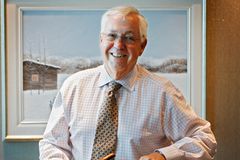 Clay Riddell: An empire built upon risk, leverage and luck
September 3, 2007
Oil veteran Clay Riddell takes pride in defending Berkley
February 8, 2001
Follow us on Twitter @globebusiness Opens in a new window
Report an error Editorial code of conduct
Due to technical reasons, we have temporarily removed commenting from our articles. We hope to have this fixed soon. Thank you for your patience. If you are looking to give feedback on our new site, please send it along to feedback@globeandmail.com. If you want to write a letter to the editor, please forward to letters@globeandmail.com.
Comments