Shares of Dialogue Health Technologies Inc. jumped 19 per cent over their listing price on their first day of trading on the Toronto Stock Exchange on Tuesday, extending the telemedicine company’s momentum after years of growth that were augmented by the pandemic.

Montreal-based Dialogue was founded in 2016 and provides consumers with online health consultations through employers and insurers, which Dialogue bills for using its services. It was already seeing rapid growth by early last year in remotely connecting patients and medical professionals, before becoming one of the early benefactors of the pandemic’s shift to digital services. The company’s shares closed at $14.26 Tuesday in the highly anticipated stock offering on an otherwise flat day for the TSX, valuing the company at $925-million.

Dialogue shares were initially priced at $12 last week after receiving more than $1-billion worth of orders, making it 10 times oversubscribed, two sources told The Globe and Mail last week. (The Globe is not disclosing the identities of the sources because they are not authorized to speak publicly about the matter.)

“It’s definitely the beginning of something great,” chief executive Cherif Habib said in an interview Tuesday afternoon as his company’s shares hovered around $15.30. He co-founded the Dialogue with Alexis Smirnov and Anna Chif five years ago.

Mr. Habib said that the company will focus on boosting the uptake of its products in Canada as well as Germany – where last year it bought Argumed Consulting Group GmbH, which helps companies assess and address workplace issues that could cause harm to employees. Much of that work is mandatory in some European countries, but is often done without the aid of such technology, which Mr. Habib sees as a significant growth opportunity.

There are opportunities to expand that product within Canada and to eventually expand its telehealth and employee-assistance program services to Germany, as well. And Dialogue has about a dozen potential acquisition targets in its pipeline, Mr. Habib said – with at least one that could be announced by the end of the year, if plans work out. But he aims to keep the focus tight: “It’s really been a mantra of the company to do few things, but do them really well.”

After a prepandemic drought of technology listings, Dialogue is the latest in a slew of offerings that follow surging investor interest in companies that replace in-person experiences with online tools. The Ottawa-based e-commerce platform Shopify Inc. surged in the past year to become Canada’s most valuable company, for instance, while shares of the Toronto digital mental-health-therapy provider MindBeacon Holdings Inc. jumped 39 per cent on their first day of trading in December.

Dialogue’s revenues nearly tripled in 2020 to $29-million from $10.1-million in 2019, according to the prospectus filed ahead of its IPO – but Mr. Habib says that the company’s growth wasn’t entirely COVID-19 related, noting that it had more-than-double revenue growth in the year prior, too. (The company’s loss widened to $20.2-million in 2020 from $12-million in 2019.)

There may soon be more competition among telemedicine companies on the TSX, as Loblaw Cos. Ltd.-backed Maple Corp. is expected to file to list on the exchange in the coming months.

But while Maple has seen much of its growth come from virtual consultations through Loblaws-owned Shoppers Drug Mart, Mr. Habib said Dialogue has the benefit of both multiple services through its app, and built-in scale from exclusively offering its services through employers and insurance companies, which he said brings in dependable recurring revenue.

Dialogue’s prospectus said that about 2.5 million customers and their dependents had access to the platform. Many of those are through group plans offered by companies such as HSBC Holdings PLC, Lightspeed POS Inc., Alphabet Inc.’s Google, Empire Co. Ltd.’s Sobeys and SNC-Lavalin Group Inc.

The company had raised more than $100-million in venture financing in private markets. Going into its public listing, its two biggest shareholders – Sun Life Assurance Co. of Canada and White Star Capital – owned a combined 27.4 per cent of the company’s stock.

Once trading began Tuesday, White Star’s shares were worth more than seven times what they paid for their stake through early venture capital investments. “We were betting on better penetration of telemedicine and virtual care” in Canada, White Star managing partner Jean-Francois Marcoux said in an interview.

With public investors now boosting Dialogue’s price, he continued, “I think there’s a belief that [telehealth] adoption is here to stay, even beyond the pandemic.”

With reports from Sean Silcoff

Editor’s note: This story has been updated to clarify that once trading began Tuesday, White Star’s shares were worth more than seven times what they paid for their stake through early venture capital investments in Dialogue. 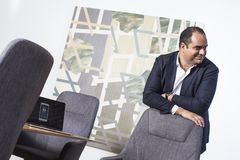