Taiga Motors Inc., a Montreal electric-vehicle producer, plans to go public later this year through a special-purpose acquisition company merger, one of the few companies to make its market debut with a Canadian-listed SPAC.

Taiga said in a statement on Wednesday that it expects to have a market capitalization of $537-million upon completion of the deal. The valuation includes a $100-million investment from a group led by Northern Private Capital – a Toronto-based private equity fund founded by Nova Scotia billionaire John Risley.

Taiga plans to produce all-electric powersports vehicles with models such as Atlas snowmobiles and Orca personal watercraft. Prices will start at US$15,000. The company is targeting buyers who want to reduce their footprint on the environment but have the performance of gasoline-powered machines.

Taiga chief executive officer Sam Bruneau said in an interview that about half of the company’s individual, non-commercial buyers who have placed preorders have never before owned a powersport vehicle. That suggests the company is attracting new consumers, not merely fighting established manufacturers such as BRP Inc. and Polaris Inc. for market share.

“Ten years ago, everyone in the auto space was saying you could never sell an electric car that would be interesting to consumers from a performance and a price standpoint,” Mr. Bruneau said. “That’s kind of where we’re at today.”

The SPAC went public in April, 2019, listing on the Toronto Stock Exchange and the NEO Exchange, and raising $100-million. It had two years to find an acquisition target, and was intended to acquire a cannabis company, given investor interest at the time, said Michael Shuh, CEO and chairman of the Canaccord Genuity Growth Corp. II and the investment company’s head of structured products.

“As the cannabis market went through ups and downs, we evaluated other alternatives,” Mr. Shuh said in an interview. “The truth is, the electric-vehicle-green-investing space is very in-favour currently, so we decided Taiga was the best idea.” He added that Canaccord had to compete with SPACs south of the border to make a deal with Taiga.

“We’ve had a relationship with them for a number of years, and helped them raise financing, so that certainly helped,” he said. The statement said the transaction, led by Canaccord and National Bank Financial, is expected to close in April. The new company will be called Taiga Corp. and will list on the Toronto Stock Exchange.

Founded in 2015, Taiga said in the statement that it believes it is the only manufacturer of electric-focused powersports vehicles poised to start mass production and distribution in the near term after completing its development work. It said it has signed up about 760 dealers and booked about 1,400 preorders.

It won’t be alone for long. BRP of Valcourt, Que., is developing battery packs, engines and other equipment with a view to introducing electric models within the next three years. Polaris is also working on electric-vehicle development.

“The target market is still a lot smaller than the traditional one” for gasoline-powered vehicles, said Jaime Katz, an equity analyst at Morningstar Research in Chicago. Having a smaller impact on the environment is “important to some people, but it’s not important to everybody. The product is going to have to be as good or better to warrant a higher price point,” she said.

Taiga said in the statement that it plans to use proceeds from the transaction to speed up production at its 50,000-square-foot research and development and assembly facility in Montreal for building its preorders. It plans to open a much larger factory capable of producing 60,000 vehicles by 2025.

SPACs, sometimes called blank-cheque companies, exploded in popularity in the United States last year, with 248 going public, raising more than US$80-billion cumulatively, according to data from SPAC Insider. In the first six weeks of 2021, 151 SPAC initial public offerings in the U.S. have generated more than US$40-billion.

The excitement has not made it to Canada. Last year, three SPACs went public on Canadian exchanges, raising about half a billion dollars.

Canaccord is one of the few Canadian investment banks to participate in SPACs, both as a sponsor and underwriter. Most recently, the company raised more than US$200-million on the Nasdaq by launching Environmental Impact Acquisition Corp. as a shell vehicle to acquire one or more cleantech or renewable-energy companies for up to US$2-billion.

Meanwhile, a slew of Canadian companies that make electric vehicles and clean technology have made their public market debuts via SPAC of late. On Tuesday, battery recycler Li-Cycle Corp. went public on the New York Stock Exchange, in a deal that valued the company at US$1.7-billion. Last November, Quebec-based electric bus manufacturer Lion Electric Co. netted US$500-million by merging with a SPAC called Northern Genesis Acquisition Corp. on the NYSE.

The electric Taiga Orca aims to make a (quiet) splash in the watercraft market
July 27, 2020 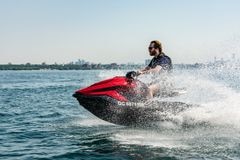