Vanmala SubramaniamCapital Markets Reporter
Published May 28, 2021 Updated May 28, 2021
For Subscribers
Comments
Text Size
Please log in to listen to this story. Also available in French and Mandarin. Log In Create Free Account

Hexo will pay $400-million in cash and $525-million in shares at a price of $7.53 a share for the Pelham, Ont.-based private company. The transaction is expected to close in the third quarter of 2021, pending the approval of a majority of Hexo’s shareholders in a meeting that is slated for August. Redecan shareholders are expected to own 31 per cent of Hexo’s shares once the transaction is complete.

“The brand is phenomenal. It has the number one loyalty in Canada and we believe it is one of the most profitable licensed producers in Canada,” said Hexo co-founder and chief executive Sébastien St-Louis in a Friday morning call with analysts and investors.

Data from cannabis analytics firm Headset indicate that Redecan is the third-largest pot seller in the Canadian recreational market; its prerolled cannabis products are best-sellers in both Ontario and British Columbia. The Redecan deal would see Hexo capture a market share of 17 per cent of all recreational cannabis sales in Canada. Tilray would occupy a market share of 15.5 per cent, and Canopy Growth would have 14 per cent of the adult-use market.

This is the third acquisition that Hexo has made over the past four months as part of its strategy to become one of the three largest pot producers in the world. In February, Hexo paid $235-million in an all-share deal to purchase New Brunswick cannabis producer Zenabis Global Inc. On May 17, the company announced it was buying another mid-sized cannabis producer, 48North Cannabis Corp., in an all-stock transaction worth $50-million.

To fund the cash portion of the Redecan acquisition, Hexo took out a convertible loan of US$360-million.

Mr. St-Louis said his company is exploring how to enter the U.S. pot market, but does not intend to make an acquisition of an American cannabis company, even in the event that cannabis becomes federally legal in the United States. “We’re going to be a products company. The idea with these acquisitions is to build a winning portfolio and take that portfolio into the U.S. when we can,” he said.

Although a popular brand among consumers, Redecan has maintained a relatively reclusive presence in the Canadian cannabis industry. The company was founded in 2014 by Rick Redekop and became one of the first cannabis producers to obtain a licence from Health Canada to grow medical weed. Mr. Redekop subsequently added Will and Peter Montour to the team, brothers with decades of experience in vegetable farming.

Will Montour told analysts and investors on the Friday call that Redecan had achieved much success since marijuana legalization more than two years ago and it made “the most sense” to partner up with a company that had “significant infrastructure built out.”

Hexo currently owns more than two million square feet of growing capacity in Quebec and Ontario, including a recently renovated facility in Belleville, Ont. The company was embroiled in controversy in November, 2019, after it admitted to growing unlicensed cannabis in a facility it owned in the Niagara region, which was subsequently shut down and sold off at a loss. More than 200 employees were laid off in the process.

Since then however, the company has steadily improved its revenue and cash position, in part because of cost-cutting measures. As of Jan. 31, Hexo was sitting on $129-million in cash. It’s fiscal second-quarter revenue was $32-million, almost double what it was a year prior.

Analysts largely viewed the deal as a favourable one for Hexo. In a note to clients, Bank of Montreal cannabis analyst Tamy Chen called Redecan a “gem in Canada” and estimated that the company had generated revenue of approximately $110-million over the past 12 months.

Andrew Carter, an analyst at Stifel Financial Inc. said the deal was “compelling” but cautioned that a competing bidder could emerge before the deal is finalized. He believes Canopy Growth, with its “extensive financial resources” presents the biggest risk for a competing bid. 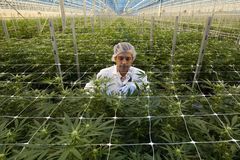 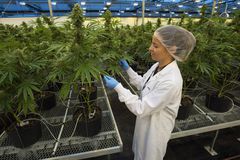