Seven months after the Kitchener, Ont., wearable-tech firm North Inc. announced it had pivoted to making smart glasses, the company’s chief executive officer acknowledges it has had some growing pains.

In the past few years, North – formerly a motion-sensing-armband maker called Thalmic Labs – has made several big announcements, most of them good news. In September, 2016, it revealed it had secured one of the largest venture-capital raises in Canadian history, bringing in nearly $160-million led by Intel Capital, Amazon’s Alexa Fund and Fidelity Investments Capital. In October, it unveiled how that money was being invested: consumer-focused “smart” glasses called Focals with a screen that beams select messages from a cellphone into the wearer’s line of sight; unlike Google Glass, they really looked like normal glasses. Four months later, however, North laid off as many as 150 of its nearly 500 staff.

Those layoffs came as the company hit the brakes on a number of undisclosed projects to focus on Focals, its co-founder and CEO Stephen Lake said in an interview at North’s headquarters this month. In the meantime, the company has quietly raised US$40-million in convertible-debt bridge financing from prior investors Intel, Amazon and Fidelity, according to a source familiar with the company who was granted anonymity because they were not authorized to speak publicly.

The financing round, the source said, would help the company fund operations until a more significant round in the coming months, which could potentially be tied to a new version of the glasses. Mr. Lake acknowledged that North had raised more capital this year, although he would not confirm the amount, and said that it would not be raising further money this year. But he said the recent financing would help give the company greater flexibility as it puts its energy into refining a brand-new product in the nascent category of consumer-friendly smart glasses.

“We think we have a great product, but we’re learning from the first consumers who believe in the same vision and mission we have,” Mr. Lake said. That includes adding functionality based on their suggestions and complaints, he said. In recent weeks, it has added features such as flight information, transit directions and music through Spotify.

While the CEO declined to reveal any numbers about the demand for Focals, he pointed to the success of the pop-up truck the company built in its parking lot last winter and sent down the West Coast. Focals require customers to book online and be fitted for a custom pair in person; Mr. Lake said that each of the truck’s stops, in cities such as Seattle, Portland and San Francisco, were fully booked with appointments, sometimes two at a time. North has since built a second pop-up truck, and he expects both to make regular appearances along the east and west coasts.

As for North’s two retail locations on Toronto’s trendy Ossington Avenue and in Brooklyn’s Cobble Hill, “our footprints are huge,” Mr. Lake said – 3,200 square feet and 5,500 square feet, respectively. They were designed for bottlenecks from 30-minute fitting appointments, but appointments wound up taking half that time or less, and crowds weren’t building up. “In the next cities, we’ll be experimenting with the right format that makes sense for the product,” Mr. Lake says.

The February layoffs were “never the first choice" – but still, "a tough-but-necessary choice to set us up for success long term,” he said. “We made a decision to focus … so it means saying no to some things and it ultimately meant changing the team.”

Carmi Levy, a London, Ont.-based tech analyst, said in an interview that it will take time and increased effort for North to usher mart glasses into the mainstream. Demand for the product is low right now, he said, which would put North in a hard financial position – one that would require extra financing and reduced costs.

The analyst said the smart move would be for North to find partners, such as telecoms who already sell smartphones, to help sell the product. “We’re still not at a point where consumer awareness is where it needs to be,” Mr. Levy said. 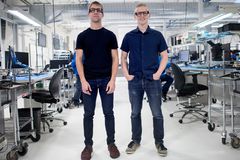