Score one for Louis Audet.

Cogeco Communications Inc ., controlled by Montreal-based Mr. Audet and his family, expanded its U.S. operations on Wednesday by snapping up 200,000 new internet subscribers in Ohio with a US$1.13-billion takeover.

This is precisely the sort of deal that suitors Rogers Communications Inc. and Altice USA Inc. claimed was out of reach for Cogeco when they made a hostile $10-billion bid for it last September. The bidders said Cogeco, as the fifth-largest Canadian telecom player and a pipsqueak in the consolidating American market, didn’t have the cash needed to build out a domestic 5G network while simultaneously rolling out an acquisition-based U.S. expansion strategy.

Mr. Audet, whose father launched the business out of a Trois-Rivières television station, told his rivals to pound sand. Saying no to Rogers and Altice meant Cogeco’s chair turned down a $900-million payday for his family. At the time, Cogeco lead director James Cherry said, “Cogeco will focus on what matters, executing on our growth strategy, investing in our North American broadband and media platforms.”

Facing much the same dynamic, Calgary’s Shaw family said yes to a $20.4-billion takeover offer from Rogers this spring.

On Wednesday, Cogeco demonstrated it can go toe to toe with far larger U.S. telecom players, including acquisition-hungry Altice, and win businesses that go on the auction block.

Cogeco’s U.S. division, Atlantic Broadband, is buying an internet and cable platform in Cleveland and Columbus from WideOpenWest Inc., known as WOW. The California-based telecom company is selling the division to pay down debt. Buying WOW’s Ohio operation boosts Atlantic’s customer base in 11 eastern states, including neighbouring Pennsylvania, to 707,000 internet subscribers from 511,000.

Atlantic, which features the Caisse de dépôt et placement du Québec as a minority owner, is paying for the acquisition with cash on hand and a US$900-million loan from Credit Suisse and Wells Fargo. While Rogers and Altice were skeptical of Cogeco’s U.S. prospects, lenders are clearly onside.

Cogeco is acquiring a business in Ohio that faces headwinds. WOW owns what’s known as an “overbuilder,” a newcomer to the region that’s trying to win internet, cable and phone subscribers from incumbent telecoms. The dominant players in Ohio are Cox Communications and Charter Communications, both of which are far larger than Atlantic.

“WOW’s Ohio internet subscriber penetration is only 29 per cent,” Jeff Fan, telecom analyst at Bank of Nova Scotia, said in a report. He said prior to the pandemic, “WOW’s EBITDA growth and share price significantly underperformed its U.S. cable peers.”

However, Cogeco is buying the U.S. business for less than what rivals ponied up in recent takeovers. Mr. Fan said Cogeco is paying 9.1 times the WOW unit’s projected earnings before interest, taxes, depreciation and amortization, or EBITDA. In comparison, Altice offered 10 times EBITDA when it unsuccessfully bid for Cogeco’s U.S. business last year and Rogers plans to pay 11 times EBITDA for Shaw.

As part of the deal, Cogeco acquires US$140-million of tax benefits from WOW.

Mr. Jetté didn’t bother to say “told you so” to spurned suitors. He didn’t say that Cogeco shares now trade for a higher price than they hit last fall, when Rogers and Altice came calling. In its first major transaction since the failed hostile takeover, Cogeco simply showed it can execute on an expansion plan its rivals dismissed. 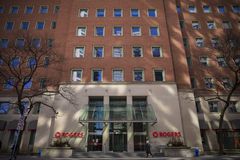 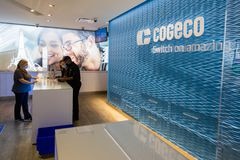