As Canadians, we’re proud of the regulatory processes that our government has in place; the system of checks-and-balances is well-established and respected. That said, it was discouraging this week to see Ottawa invoke national security as a pretext to blocking China Communications Construction Co.’s $1.5-billion bid to buy Toronto-based construction company Aecon Group Inc. The move will likely have an impact on Canada-China trade and it will certainly influence perceptions in Asia of Canada as an investment destination.

We may never know what the federal security review discovered or determined in its closed deliberations, or for that matter what influence continuing U.S. trade negotiations or fear of a public backlash closer to home had on the political decision to block the deal. But for Canada, and its future prosperity in a world whose centre of economic gravity has shifted, the decision will send a confusing message to our Asian trading partners.

Free-trade talks with China were stalled before Aecon rejection

Aecon ambiguity: In Ottawa, there are no easy answers to the China question

Barrie McKenna: Canada is blocking China’s takeover of Aecon for all the wrong reasons

At face value, this was a deal for a Canadian construction company by an overseas division of a Chinese state-owned enterprise (SOE). China Communications Construction Co. (CCCC) is one of the world’s largest engineering and construction groups and is 64-per-cent owned by the Chinese government. Other shareholders in the firm, incidentally, include affiliates and funds with Merrill Lynch, BlackRock and JPMorgan Chase. CCCC is also listed on the Hong Kong stock exchange, which offers a sound regulatory framework and safeguards for investors. Certainly, CCCC is a Chinese SOE and concerns over the geopolitical goals of the country’s growing international network of SOEs are legitimate. But CCCC is hardly the bogeyman bent on sucking intellectual property and technological secrets out of tendered construction projects in Canada. In fact, with the incredible degree of infrastructure development in China over the past 30 years and the innovative construction technologies that have emerged, Canada’s own infrastructure sector may be the ultimate loser as a result of the decision.

Most confusing, however, is the inconsistency in Canada’s recent decisions on Chinese acquisitions. Just last year, Ottawa approved Chinese SOE purchases of Canadian technology companies Norsat and ITF Technologies, both with sensitive technology and contracts. Aecon, on the other hand is a contractor that builds infrastructure; it is not an owner of infrastructure, which would clearly place it in another category.

Innovation Minister Navdeep Bains said this week that despite killing the massive takeover, Canada is still open to working with China in the future. Be that as it may, the Chinese said the move “will seriously undermine the confidence of Chinese investors” and raised the spectre of lingering “prejudices” and “playing fields” that are not level. The issue of “prejudice” is a possibility, but the Chinese asking for a level playing field is like the pot calling the kettle black.

For Canada, the nixed deal means a less competitive environment in our construction sector and, perhaps, less access to infrastructure projects originating from China’s ambitious “Belt and Road Initiative.” But more important are the implications for Canada’s trade agenda in China and larger Asia.

In 2012, Ottawa and Beijing signed a Canada-China Foreign Investment Promotion and Protection Agreement (FIPA) that came into force in 2014, and Canada has since been pursuing free-trade talks with China. Those talks are stuck in the exploratory phase; Prime Minister Justin Trudeau’s trip to China last December, during which he attempted to add social and environmental stipulations, did little to push the talks further. How our second largest trade partner, and the world’s No. 2 economy, will react in the long term to the nixed Aecon deal is anyone’s guess. But China’s domestic market is enormous and growing, the country has many more levers at its disposal and it has many other countries from which to purchase its goods.

While this week’s decision will definitely have an impact in terms of Chinese interest and attitudes toward investing in Canada, many Canadians may simply not care. The Asia Pacific Foundation of Canada’s national opinion polling indicates Canadians are concerned about investment from China in general (only 42 per cent support it) and SOE investment in our resource sector particular (only 11 per cent support). And 64 per cent of Canadians believe increased economic engagement with China will make Canada more vulnerable to economic and political pressures from the Chinese government.

Global skepticism of China is not something Canada should embrace. We haven’t in the past – something not lost on our Chinese friends. China is flexing its muscles in many troubling ways; this should be a concern for Canada and there is a need for heightened awareness. We may never know what the national security review found, or what role the troubled NAFTA renegotiations and concerns over a public opinion backlash played in the deal being blocked, but we are left with the hope that the process was fair and impartial.

Stewart Beck is president and CEO of the Asia Pacific Foundation of Canada, and a Canadian career diplomat who served abroad in China, India, Taiwan and the United States.

Opinion
Canada is blocking China’s takeover of Aecon for all the wrong reasons
Subscriber content
May 25, 2018

Opinion
Where does Trudeau draw the line with Beijing?
Subscriber content
May 24, 2018 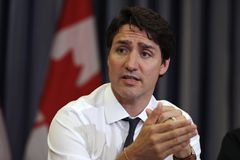