An administrative law judge (ALJ) late on Monday rejected Enbridge’s preferred route for its Line 3 pipeline replacement, citing shifting energy demands and concerns over the company’s plan to abandon the existing line in the ground.

Judge Ann O’Reilly said Line 3 should proceed, but only on condition Enbridge removes and replaces the aging line along its existing right-of-way – an option the company had previously dismissed as impractical and cost prohibitive.

“The abandonment of the old Line 3 and the creation of a new corridor leaves open the possibility of thousands of miles of Enbridge pipelines someday being abandoned in-place when they are no longer economically useful to [the] applicant,” Judge O’Reilly wrote.

“This is particularly true in a carbon-conscious world moving away from fossil fuels; a move that Minnesota aspires to follow.”

The recommendation is a blow to Enbridge that threatens to further delay and heap additional costs on the $9-billion project, seen as critical to the company as well as Alberta’s beleaguered oil sands industry.

CEO Mr. Monaco is under pressure to cut debt and sell assets to help fund $22-billion in growth projects, including Line 3. Enbridge shares finished Tuesday’s session on the Toronto Stock Exchange at $37.68, down 5.37 per cent.

The recommendations from the ALJ, while not binding, will inform a final decision on Line 3 expected in June from the state’s Public Utilities Commission. It’s the last regulatory hurdle for the project, which is already under construction in Canada following approval, in late 2016, by Prime Minister Justin Trudeau.

“I think there’s probably a very high likelihood that this project gets done,” said Manash Goswami, a Toronto-based portfolio manager at First Asset Management, which owns the stock.

“Now the question is which route and will there be an escalation in cost?”

Line 3, one of six pipelines that comprise Enbridge’s mainline from Hardisty, Alta., to Superior, Wis., has suffered numerous leaks over the years and currently flows at a little more than half its capacity of 760,000 barrels of oil a day.

Enbridge wants to restore capacity to full and says replacing the line would help ease congestion that has contributed to bouts of severe price discounts on oil sands crude. However, its preferred route through Minnesota traverses a lake-dotted region south of the existing path and has raised the ire of environmentalists and Indigenous groups who fear impacts on waterways and traditional rights to harvest wild rice.

In her recommendations, Judge O’Reilly said Enbridge will eventually have to renegotiate easements – set to expire in 2029 – for six pipelines on its mainline route with the U.S. federal government as well as with the Leech Lake and Fond du Lac reservations.

A new corridor opens the possibility the company could one day seek to relocate its other pipelines, especially if negotiations with the Indigenous tribes prove unsuccessful, Judge O’Reilly said.

Both tribes have previously opposed replacing Line 3 along the existing route, posing additional hurdles for Enbridge should state regulators abide by the ALJ recommendation.

In a statement, Enbridge said the company is pleased that the judge listened to the evidence demonstrating there’s a need for replacing Line 3, which it called a “safety-driven maintenance project.”

However, the company said it would continue to push for approval of its preferred route, a path it said was selected to avoid sensitive areas and that a final environmental impact statement approved by state regulators had endorsed.

Enbridge has previously pegged the cost of removing Line 3 at US$1.28-billion, according to regulatory documents. That compares with US$85-million to decommission and abandon the line, plus US$100,000 annually for monitoring.

Toronto-Dominion Bank analyst Linda Ezergailis told clients she remains optimistic that Line 3 can profitably proceed, “but we believe that the project economics for shareholders could be less compelling than originally contemplated.” 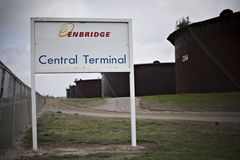 Buy, short or hold? Three fund managers on what to do as Enbridge shares tumble Subscriber content
March 16, 2018 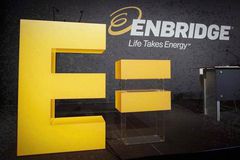 Enbridge on track to sell $3-billion in assets this year: CEO
February 16, 2018
Follow Jeff Lewis on Twitter @jeffalewis
Report an error Editorial code of conduct
Due to technical reasons, we have temporarily removed commenting from our articles. We hope to have this fixed soon. Thank you for your patience. If you are looking to give feedback on our new site, please send it along to feedback@globeandmail.com. If you want to write a letter to the editor, please forward to letters@globeandmail.com.
Comments are closed