Just the other week, the frustrations of snow drifts, low temperatures and icy sidewalks in Calgary were the furthest things from my mind.

I was in Vietnam, a country that is beautiful and chaotic – a captivating, cultural whirlwind like nothing I had never experienced. The country’s historic capital, Hanoi, was especially exquisite, filled with plenty of old ornate buildings and restaurants, large and small food vendors, and more along every road and alley. Above all else, Vietnam was mind-alteringly delicious.

One of Hanoi’s most famous dishes is Chả Cá Lã Vọng. After a restaurant created it decades ago, it grew to such popularity that the city named a street after it. Turmeric-marinated fish is sautéed on your tabletop with water spinach, fresh dill and green onions. Once cooked, you take small portions straight out of the hot pan and mix them with accoutrements such as rice noodles, mint leaves, pan-seared peanuts, fermented shrimp paste and fish sauce.

My first bite of Chả Cá Lã Vọng was the moment that everything I thought I knew about Vietnam’s cuisine went out the window. (Dill in a Vietnamese dish?)

In recent years, forward-thinking chefs in Alberta have taken their Asian roots and applied them to their restaurant concepts. The common result is a dining experience that helps patrons discover aspects of a food culture they likely didn’t know existed.

At Foreign Concept in Calgary, owner Duncan Ly and his executive chef, Jinhee Lee, pull from their overseas roots – which are in Vietnam and South Korea, respectively – to create a menu that takes traditional dishes and iconic ingredients from these countries to a more modern level.

“I didn’t cook when I lived in Korea because I wasn’t a chef yet,” says Ms. Lee, who arrived in Canada in 2007. “I started cooking here, learning classical technique through culinary school. Once I [visited back home], I could take [the traditional Southern Korean flavours and ingredients that I grew up with] and cook them in my own style.”

Though born in Incheon, South Korea, a city near the west coast, Ms. Lee says her favourite example of an elevated Asian classic is her take on Chả Cá Lã Vọng. The chef marinates fillets of Alberta trout in turmeric and yogurt before searing them and serving on beds of tender rice noodles and confit green onions.

The term “fusion” might get an eye roll these days, but Mr. Ly and Ms. Lee find a clever balance between their Vietnamese and Korean roots by way of Foreign Concept’s imperial rolls. Traditionally filled with noodles and ground pork, wrapped in rice paper and then fried, they are served with lettuce, fresh herbs and a staple dipping sauce called nuoc cham in Vietnam. Their cultural melding uses a bulgogi beef filling and they serve the crispy rolls with red leaf lettuce, kimchi and ssamjang (a sauce primarily consisting of a fermented chili paste called gochujang and fermented soybean paste).

In downtown Calgary, Lam Pham owns Pure Vietnamese Kitchen and Bar. Here, Mr. Lam pushes the boundaries of what Calgarians expect of Vietnamese cuisine. The chef says that although Vietnamese restaurants in the city are often delicious, they tend to offer the same few items. With Pure, he is trying to broaden those horizons.

He happily echoes Ms. Lee’s sentiments on benefiting from his culinary education. Simply knowing how to properly cook main ingredients has allowed him to improve on the dishes he grew up eating.

“In Vietnam, places focus a lot more on flavour and not technique. My schooling trained me to do things like cook a fish to perfection.” Mr. Pham explains . “A lot of fish dishes in Vietnam are overcooked. When you cook a fish properly, obviously the texture is different, which makes the dish itself tastes even better.”

Edmonton’s John Ahn is the chef and owner of NongBu, a Korean restaurant on a mission to expose diners to a world of cuisine beyond the barbecues and bibimbaps. Similar to Mr. Pham’s view, Mr. Ahn says that few Korean eateries venture past the typical barbecue-style format.

The chef, who was born in the southern region of South Korea, points out that since the majority of Korean immigration to Canada took place in the 1970s and 80s, there have been some notable shifts in South Korea’s food culture. As such, dishes and techniques have emerged, or become revived, overseas in the past few decades that both Korean immigrants and Canadian-born individuals have not been exposed to.

“The children of Korean immigrants of [that time period], grew up eating Westernized Korean food ... bulgogi, barbecue and all of that. To them, they interpret our food as fusion and that we are creating our food out of nowhere,” Mr. Ahn says, chuckling. “But no! It’s all very authentic!”

The chef says that his approach to exploring regional Korean cooking and learning to cook traditional dishes such as kalguksu, a rich soup with hand-cut noodles, or budae jjigae, a braised dish primarily consisting of beans, sausage and kimchi – also known as “Korean Army Stew” for its creation post-Korean War – have resulted in a unique clientele beyond the curious Edmontonian diner.

“We see a lot of Korean seniors who come in and tell us that our food reminds them of what they grew up with, which is nice. Then there are newer immigrants. These people who have come from overseas more recently have seen the resurgence of traditional Korean dishes in South Korea, so they [appreciate what we’re trying to do here].” 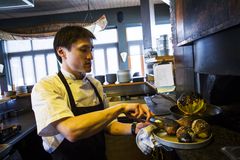 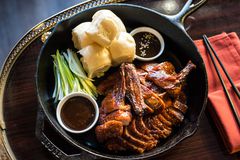 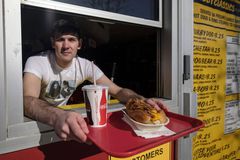