First Nations across Canada are having their own second wave of COVID-19 – a jump in case numbers that Indigenous leaders and federal officials are monitoring closely because of the virus’s potential to spread like wildfire in communities often far from medical care.

Indigenous communities have a higher risk of spread and poor outcomes owing to health inequities, a greater prevalence of underlying medical conditions and lack of hospitals in remote areas, Canada’s Chief Public Health Officer says. First Nations leaders and health officials also worry the second wave could be more extensive than the first.

COVID-19 cases in Canada increased by 40% over past seven days, Dr. Tam says

In mid-March, when pandemic lockdowns began, First Nations had a few cases, and 32 by the end of the month.

The first wave spiked in the last week of April, with 99 infections. After a lull, new cases began to rise in late August and grew by more than six times. By the end of summer, there were 129 active cases among First Nations.

As of Monday, ISC was aware of 722 COVID-19 infections affecting First Nations since the pandemic began, noting 95 active cases, 60 hospitalizations, 614 recoveries and 13 deaths.

First Nations in Alberta and British Columbia have been hit the hardest, with a total of 298 cases reported in Alberta and 161 in B.C. There have also been 99 in Saskatchewan, 31 in Manitoba, 80 in Ontario and 53 in Quebec.

In a recent interview, Indigenous Services Minister Marc Miller said concern about the second wave in First Nations is “immense.” He said Indigenous communities did exceedingly well under the first wave, but “we can’t take that for granted.”

Shannon McDonald, acting chief medical officer of B.C’s First Nations Health Authority, the only Indigenous provincewide health authority in Canada, said First Nations in British Columbia had few cases during the first wave, but the numbers have gone up precipitously, mostly within the past month.

Growth hasn’t just happened in First Nations, she said in an interview, adding there has also been significant growth provincewide, particularly on the Lower Mainland. She said the good news is that the clusters in First Nations are small.

“What people are worried about is the kind of outbreak where we can’t trace; where we don’t know the source of the infection," she said.

Similar concerns have been raised in Manitoba, which on Tuesday had 781 active cases and 1,441 recoveries from COVID-19. There were 28 people in hospital, seven in intensive care and 24 deaths.

Public-health officials last month restricted travel in an attempt to prevent the spread of the virus to northern Manitoba and remote communities, and recently mandated masks be worn in indoor public spaces in the Winnipeg area and limited gatherings to 10 people.

NDP MP Niki Ashton, who represents the riding that includes York Factory First Nation, said members of the community are extremely worried because people there have to go to Winnipeg for health care appointments, such as meetings with specialists, surgery and follow-ups. She noted a recent case in the community was linked to medical travel.

As long as COVID-19 cases are increasing in Winnipeg, First Nations and Northern communities will be vulnerable, Ms. Ashton said.

“We need to recognize our communities are very much interconnected; people are going back and forth for medical on a daily basis," she said.

Over the weekend, Chief Raymond Keeper of Little Grand Rapids First Nation in Manitoba, an Anishinaabe community northeast of Winnipeg near the Manitoba and Ontario border, said he and the band council asked the province to work with them to increase safety measures. As of Sunday, the First Nation had 19 confirmed cases since Sept. 30.

Valerie Gideon, associate deputy minister of the federal department Indigenous Services Canada, said some First Nations are concerned about an increase in community transmission because people have to travel for services to cities that are reopening their economies.

She added that it is also difficult for communities to maintain their own restrictions if neighbouring, non-First Nation communities are open.

As Ontario and Quebec also grapple with the second wave, First Nations in both provinces are reinstating travel restrictions to and from high risk areas such as Montreal and Winnipeg.

Many remote communities have limited passenger travel in and out to essential workers and medical patients, but the measures are not completely shielding them from the virus.

The Eeyou Istchee Cree Nation in northern Quebec said in a news release that the death of an elder in a Montreal hospital on Sept. 26 is the nation’s fourth related to COVID-19. The elder had been in hospital for three weeks.

Recent cases reported in Sandy Lake First Nation in Northwestern Ontario and in the Nunavik region of northern Quebec have been traced to people who travelled outside, including medical patients who went to Winnipeg.

Last week, Kahnawa:ke in Quebec confirmed five cases involving a local hockey team that was traced to a Montreal school. The Kanien’keha:ka community just south of Montreal has a population of about 8,000, and had 25 reported cases in the first wave.

Ms. Westaway said the community has its own testing site and a public-health team that does contact tracing within 24 hours of a positive case, but the wait for results from the province is more than five days.

Montreal has had more than 35,000 confirmed cases since the pandemic began, prompting Kahnawa:ke to declare a red alert, the highest risk level in its pandemic emergency plan as Quebec hits record highs of more than 1,000 daily cases since the beginning of the month. 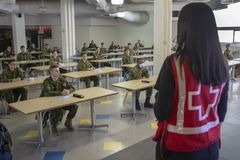 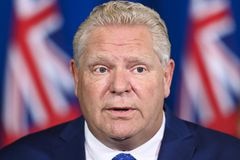