More below • Charts: Expenses, revenue and taxes • The Decibel: Inside the budget

The federal government’s 2022 budget plan lays out more than $56-billion in new spending over six years, as part of a package Finance Minister Chrystia Freeland says will boost innovation and green technology.

The budget, which the government described on Thursday as a strategy to grow the economy and make life more affordable, includes $5.3-billion to run a national dental-care program for lower-income people, the creation of two arm’s-length agencies focused on attracting private investment in Canada, and billions for housing and defence.

The minority Liberal government is facing increasing criticism from Bay Street. Some bank CEOs have expressed concern about Ottawa’s approach to economic and fiscal matters. At the same time, the Liberals have agreed to implement several NDP social spending priorities – such as dental care – as part of a parliamentary co-operation agreement reached last month.

A mix of soaring commodity prices, strong corporate balance sheets, higher inflation and other fiscal developments in recent months will deliver a projected additional $85.4-billion over six years, in comparison with the numbers in Ms. Freeland’s December fiscal update.

About two-thirds of the fiscal gain – or $56.6-billion – has been devoted to new spending. An additional $16.5-billion in revenue from tax hikes – including on big banks and insurance companies – as well as $8.9-billion in internal savings means the projected net cost of the new measures over six years is $31.2-billion.

The Finance Minister, who doubles as Deputy Prime Minister, is projecting a $52.8-billion deficit this fiscal year. That’s down significantly from the much higher deficits recorded during the height of the pandemic. The budget predicts the deficit will fall to $8.4-billion by 2026-27.

Ms. Freeland acknowledged that the budget does not include all of the spending items promised in last year’s Liberal election platform.

“This is the first of four chapters. So yes, we will do more things over the next three budgets,” she told reporters. “We will, however, do those additional things, fulfill those further promises, within an absolutely responsible fiscal framework.”

Thursday’s budget shows the federal debt-to-GDP ratio is projected to decline to 41.5 per cent by 2026-27, down from 45.1 per cent this year. That is a faster rate of decline than had been projected in December or in the government’s 2021 budget. The ratio was just over 30 per cent prior to the COVID-19 pandemic, which marked the beginning of a massive government spending program aimed at curbing the economic effects of the virus.

“We are absolutely determined that our debt-to-GDP ratio must continue to decline,” Ms. Freeland told the House of Commons on Thursday. “The extraordinary debts we incurred to keep Canadians safe and solvent must be paid down.”

Ms. Freeland acknowledged what Canada’s business leaders have been warning about for years: that the country’s economic productivity is lagging far behind the rest of the industrialized world. “So now is the time to focus – with smart investments and a clarity of purpose on growing our economy.”

A planned bank tax has been altered from an initial proposal outlined in the Liberal Party’s 2021 election platform. Rather than a three-percentage-point surtax on financial institutions’ earnings over $1-billion, the budget announces a 1.5-percentage-point increase on taxable income over $100-million. That brings the tax rate on those earnings from 15 per cent to 16.5 per cent.

While that tax increase will be in effect moving forward, the budget also includes what the government calls the Canada Recovery Dividend: a one-time 15-per-cent tax on financial institutions’ taxable income for the 2021 tax year, payable over five years. The two budgeted tax hikes are projected to bring in a little over $6-billion, down from the roughly $11-billion estimated in the Liberal platform.

The budget includes a chart illustrating Organization for Economic Co-operation and Development data that has been widely distributed by the government’s critics. It shows Canada is projected to have the lowest per-capita GDP growth among OECD countries.

A senior government official who briefed reporters said the OECD data show that Canada faces a serious challenge and must take a more direct approach in attracting foreign investment throughout the economy, particularly as the oil and gas sector becomes a smaller source of global investment. The Globe and Mail is not naming the official because the government won’t allow the individual to be publicly identified, even though they were made available to media during the budget lockup.

Ottawa will set up a $15-billion Canada Growth Fund to lure domestic and international capital to invest in the green economy. The budget says Canada needs green investments to exceed $125-billion every year, up from the typical $15-billion to $25-billion.

Ottawa will also set up an arm’s-length Canadian Innovation and Investment Agency to spur the growth of innovation in the agriculture, forestry, mining and high-tech sectors. An additional $3.8-billion will be allocated to develop a critical mineral strategy for electric-vehicle batteries.

Ms. Freeland said the budget will spur productivity and economic growth through a $10-billion investment over five years in housing programs to attract skilled immigrants and to ensure workers remain in urban centres.

“Over the next 10 years, we will double the number of new homes we build,” Ms. Freeland said. “We will invest in building more homes and bringing down the barriers that keep them from being built.”

In addition to providing $4-billion to help cities approve the construction of 100,000 new homes, Ottawa will create tax-free home savings accounts that can shelter up to $40,000. Future first-time home buyers will get RRSP-style tax rebates when they contribute, and the money will be able to grow tax-free.

The budget will also provide a first-time home buyers tax credit of $1,500, and a home renovation tax credit of up to $7,500 to help people add second suites for family members.

As promised during last year’s election campaign, the Liberal government is imposing a tax on property flipping that will affect those who buy and sell homes within a year. The policy would include exemptions for personal situations, such as a divorce or the birth of a child.

Pedro Antunes, chief economist for the Conference Board of Canada, said the scale of new spending will add further fuel to inflation. He predicted that the new housing measures will drive up wages in the country’s already tight labour market.

“It is a big-spending budget,” he said. “It does add pressure on the wage front and that’s the big concern that the banks and everyone else have, that we will end up with a wage-price spiral.”

“It is an irresponsible budget,” she said. “I am very concerned that, with their increased spending, everything will go up.”

NDP Leader Jagmeet Singh said the Liberals honoured the pact with his party to bring in dental care, hike taxes on banks and pour money into affordable housing.

“The expansion of our public-health system with the dental program is going to be life-changing for Canadians and we are proud of that,” he said.

He criticized the Liberals for pumping billions of dollars into carbon capture and storage, but said there was enough spending on NDP priorities in the budget “for our support to continue.”

Proceeds from the pollution

Proceeds from the pollution 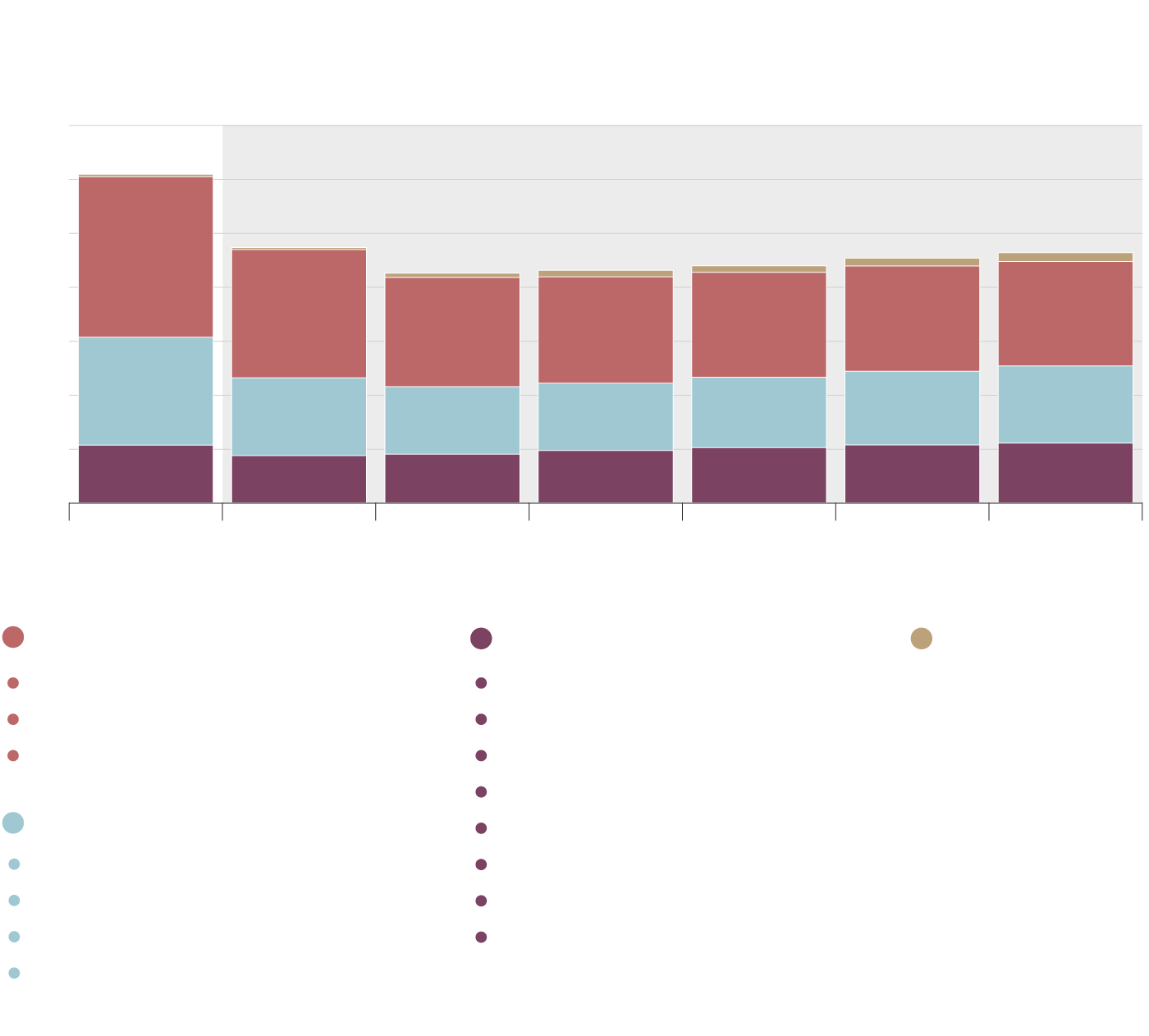 The Decibel: Behind our budget coverage

Go in depth with The Globe and Mail’s budget team in Ottawa, who spoke with Menaka Raman-Wilms about what they expected in the federal plan and how that measured up against reality.

Ahead of housing-focused 2022 federal budget, records show low take-up of shared mortgage programs from 2019
April 4, 2022
explainer
Here’s a preview of what Canadians can likely expect from the 2022 federal budget
April 5, 2022
Federal budget 2022 to include $10-billion for affordable housing
April 6, 2022