Mahinder Singh Pappu was 22 when he disappeared from his home in Punjab on Aug. 15, 1991. His family searched for him for days, finally learning that he had been taken – allegedly by police – and tortured.

“They beat him a lot,” his mother, Sawaran Kaur, told photojournalist Abhishek Madhukar and his team.

Her son was taken three times before he tried to escape home for good. It was not possible.

“The police were the ones who cremated the body,” his mother recounted. “We never saw it, just received the flowers.”

During the 1980s and 1990s, mass enforced disappearances of Sikhs – mostly young men, but also women and children – from Punjab, in northwestern India, broke up untold numbers of families. Thousands disappeared under a state-sponsored system and are believed to have been killed extrajudicially. In many cases, their bodies were never found. Some families received what they were told were the ashes of their loved ones.

Mr. Madhukar has documented the stories of those left behind in stark black-and-white photos and accompanying interview excerpts. Lapata. And the Left Behind, an exhibition of these haunting works, debuted in Vancouver on Friday, World Press Freedom Day.

The Museum of Vancouver shows a different, darker way into Canada’s residential schools with exhibition There Is Truth Here

“These are people who are caught in the crossfire and these stories need to be told and retold,” Mr. Madhukar said during a Skype interview from New Delhi. “I hope … to show their grace as Indians, their grief, despair and courage.”

The exhibition is organized by Khalsa Aid, an international NGO that provides aid in disaster areas and civil-conflict zones.

Mr. Madhukar, a Reuters correspondent based in India, was initially commissioned by Khalsa Aid to take photos for a much smaller project in 2015. Haunted by what he saw, he returned to Punjab between 2016 and 2018 to take more photos and conduct interviews.

“It struck me that what these people are missing is a part of their lives,” said Mr. Madhukar, who is also a freelance journalist. “Some of them were very old. They could barely walk or see. But they could say things. They could understand.”

The grief is palpable in these photographs. In one dusty scene, Ms. Kaur sits between her two surviving sons, Gurnam Singh and Mukhtyar Singh. The trio appears worn and weary; one man’s veins protrude from his thin legs. Behind them are two emaciated buffalo.

These losses also created economic crises for families; many of the men who disappeared were breadwinners.

The objective of this exhibition is to create mainstream awareness for the tragedy, which is largely unknown outside of India and the Sikh community.

The disappearances occurred in the aftermath of what Sikhs refer to simply as “1984.” That was the year of the Indian army raid on the Golden Temple, a sacred Sikh site, where separatists calling for a Sikh state were staying. Later that year, Prime Minister Indira Gandhi was assassinated by her Sikh bodyguards, leading to a wave of anti-Sikh violence.

The following year, Air India Flight 182 was bombed en route from Toronto to India, killing all 329 people on board, most of them Canadians. The flight had originated in Vancouver.

Ami Laws, professor of medicine at Stanford University, was at the exhibition’s opening to show her support. She shared what she witnessed in the 1990s – first as a doctor in San Francisco dealing with asylum seekers from Punjab, and later in Punjab, where she travelled to investigate.

“People streamed in to tell us their stories. … Some had themselves been tortured. Others had had family members tortured, usually sons.”

She interviewed more than 200 people in India. “There was remarkable consistency between the descriptions of torture I heard in Punjab and the stories I heard from the asylum seekers in San Francisco. Both sets of victims described torture techniques that were designed to inflict severe pain and suffering, but leave few if any scars.”

Dr. Laws wrote about this in a 2002 paper, Police Torture in Punjab, published in the journal Health and Human Rights.

“There is this continuing lack of closure and justice for all of these families,” said Jatinder Singh, director of Khalsa Aid Canada.

Mr. Singh said Canada was chosen to launch the exhibition because of its “heritage as a global refuge from state torture and injustice.” Vancouver, with its large Sikh community, felt like the right place to begin. The show is expected to travel to Toronto and Ottawa in the fall.

Lapata. And the Left Behind is at The Space in Vancouver through May 7. 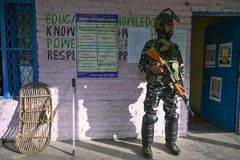 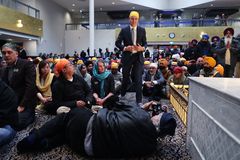 Opinion
Quebec’s religious-symbols ban is stranger than fiction – but the pushback from society must be real
April 8, 2019 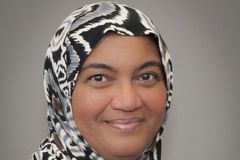