Dozens of North Americans are sick after eating romaine lettuce contaminated with a harmful form of E. coli bacteria that health officials believe is still on the market.

On Tuesday, the U.S. Centers for Disease Control and Prevention issued a blanket public warning telling people not to eat romaine lettuce. The Public Health Agency of Canada is only telling people in Ontario and Quebec – where illnesses linked to the outbreak have been confirmed – to avoid romaine.

The unfolding investigation has many moving parts – and just as many unanswered questions. Here’s what you need to know:

The Public Health Agency of Canada says three people in Ontario and 15 in Quebec are sick as a result of E. coli O157, a bacterial strain that produces toxins that can lead to severe illness, including bloody diarrhea and stomach pain. So far, six people have been hospitalized, including one with hemolytic-uremic syndrome, a severe complication of E. coli that can lead to anemia and kidney failure. The people who are sick range in age from five to 93, and 56 per cent of the cases are female. Children and the elderly are the most vulnerable to severe illness from harmful E. coli bacteria.

Lettuce can become contaminated in a number of ways, such as if feces from livestock carrying E. coli makes its way into soil or water.

Health officials interviewed those who are sick and found most of them recalled eating romaine lettuce before their symptoms began. In some cases, the lettuce was found in prepared salads purchased from grocery stores, in heads of romaine lettuce purchased and prepared at home, as well as at restaurants.

PHAC said that illnesses “continue to be reported,” which means the risks associated with contaminated romaine lettuce remain high. The time lag between when a person becomes sick and their illness is confirmed to be caused by E. coli and reported to public health officials can be a few weeks, so it’s possible more illnesses will be reported in Canada and the U.S.

PHAC says only people in Ontario and Quebec need to avoid romaine lettuce because “there is no evidence to suggest that residents in other parts of Canada are affected by this outbreak.” A statement posted on PHAC’s website also states that the U.S. CDC “has also issued communications with similar advice for U.S. individuals in affected states.”

However, the CDC is actually warning everyone in the U.S. to avoid romaine lettuce “because no common grower, supplier, distributor, or brand of romaine lettuce has been identified.”

Keith Warriner, a food safety professor at the University of Guelph, questions why the federal government wouldn’t err on the side of caution and tell everyone in Canada to avoid romaine lettuce until they figure out where the contamination is coming from.

Dr. Warriner said Canada’s approach is a bit like playing roulette, hoping no more illnesses will be reported in other provinces.

Herb Schellhorn, a professor of biology at McMaster University who studies E. coli and other food-borne pathogens, said he would advise all Canadians to avoid romaine until experts figure out the origin and where the contaminated product ended up.

“I think I would avoid it,” he said. “We can all do without romaine lettuce for a few days.”

Anna Madison, a spokeswoman for PHAC, said in an e-mail there is no evidence to suggest other provinces are affected by the outbreak.

Links to past cases

Officials believe the current outbreak is related to a similar one that occurred last year. Lab results show that the recent illnesses are a genetic match to those that arose last December, during another outbreak of E. coli linked to contaminated romaine lettuce. During the 2017 outbreak, 42 cases of E. coli O157 were reported in five provinces: Ontario, Quebec, New Brunswick, Nova Scotia and Newfoundland and Labrador. One person died and 17 were hospitalized.

Dr. Warriner said it’s not surprising to see another outbreak linked to romaine lettuce because the source of last year’s was never identified. It can be difficult to trace the sources of food-borne pathogens. While farmers test their water for the presence of E. coli, Dr. Warriner said finding the bacteria this way is like looking for a needle in a haystack. It can easily go undetected, which helps explain why the source of the 2017 outbreak never emerged.

He added that governments are often reluctant to target specific suppliers or manufacturers because of the catastrophic effects it could have on those businesses.

How can these outbreaks be prevented?

The central question facing health officials is where the contaminated lettuce came from.

Leafy greens and other fresh fruits and vegetables are often implicated in outbreaks of illness linked to food-borne pathogens. Food safety experts say there are a number of changes that could help reduce the number of bacterial outbreaks involving contaminated produce.

One major source of contamination is E. coli carried by cattle, pigs or other animals getting into soil or water. Dr. Warriner said that improvements, such as vaccinating cattle against E. coli and better farm management practices, could help reduce the number of outbreaks.

But for that to happen, governments and industry have to work to make those large-scale changes, he said.

Another method would be to develop a decontamination system that could kill the bacteria on lettuce and other crops before they make their way to the consumer, Dr. Warriner said. 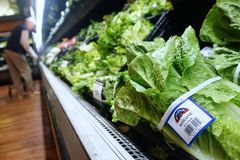